Estimating how pollen particles in the atmosphere influence climate 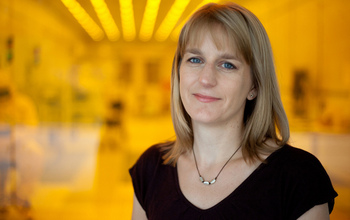 Steiner also works with middle schools and high schools to help them learn the scientific process.

In the past, many atmospheric scientists believed that pollen particles probably had a negligible effect on climate because they were so big. In recent years, however, as they began to realize that pollen particles were not as sturdy as they once thought, they have been rethinking their old assumptions.

"Pollen can rupture and generate a lot of small, tiny particles," says Allison Steiner, an associate professor of atmospheric, oceanic and space sciences at the University of Michigan. "They can break pretty easily."

Moreover, pollen, the same airborne material that wreaks misery during certain seasons in the form of drippy noses and itchy eyes, apparently can have an influence on weather. When big pollen particles break into fine ones, they can take up water vapor in the air to promote the formation of clouds, potentially altering weather systems as a result. Unlike greenhouse gases, which contribute to warming, these fine particles can have a cooling effect.

This is a process that Steiner wants to learn more about, particularly now, when much of the scientific community is devoting considerable attention to the anthropogenic--or human--causes of climate change.

"The impact of pollen in the atmosphere may change weather and it could change our understanding of the climate system," says the National Science Foundation (NSF)-funded scientist.

"How much is nature contributing?" she adds. "How important will that be in understanding what we will see in the absence of human influences? It's easier to understand the human causes, but these natural aerosols like pollen are something we don't understand very well."

Prior research indicates that when pollen becomes wet, it easily ruptures into very small particles. She wondered whether these small, pollen fragments could, "seed" the creation of clouds.

"If you have water vapor in the atmosphere, it's hard to form droplets all by itself," she explains. "But if you have a little particle already there, it's easy for water to condense on it and grow into a droplet, which enables the formation of cloud droplets.

"Most people think of pollen as being pretty inert in the atmosphere, and it's not," she adds. "It's interacting with the water cycle, and can influence clouds in ways that people hadn't realized before."

She and her team are using ground based observation data obtained from across the nation to design a computer algorithm emissions model. The model includes the different types of pollen, and takes into account various conditions that can have an effect on pollen when it enters the atmosphere, for example, rain.

She also has been working in the laboratory of Sarah Brooks, a professor of atmospheric sciences at Texas A&M University, to demonstrate pollen's effect on cloud formation. Using a cloud condensation nuclei chamber, an instrument that can reproduce the atmospheric conditions that form clouds, they were able to demonstrate that pollen can in fact grow and act as cloud droplets.

"This means that pollen could have an impact on climate," says Steiner, who conducted the experiments at Texas A & M in the spring. "One thing we are still trying to figure out is how big that effect actually is."

Steiner is conducting her research under an NSF Faculty Early Career Development (CAREER) award, which she received in 2010. The award supports junior faculty who exemplify the role of teacher-scholars through outstanding research, excellent education, and the integration of education and research within the context of the mission of their organization. NSF is funding her work with $599,940 over five years.

As part of the grant's educational component, she has worked with middle schools and high schools in Detroit and Ypsilanti. Using the sites and numerous hands-on activities will introduce students to hypothesis development, data collection and analysis, and interpretation, and also will help the pollen emissions model development.

She also plans to integrate elements of the pollen project with University of Michigan undergraduate and graduate programs, as well as form a partnership with the International Centre for Theoretical Physics in Trieste, Italy to train scientists from developing nations on the role of biosphere-atmosphere interactions.

Steiner says she is especially gratified by the response of the young middle school students "who find it a real change to have a college professor come into their classroom on a regular basis," she says, adding: "It can be a real challenge to make our research relevant for middle-school students. But the students have asked great questions, and we've developed some novel hands-on activities that have really helped the students to see how fun and exciting scientific research can be."

Related Awards
#0952650 CAREER: The Climatic Relevance of Pollen in the Atmosphere