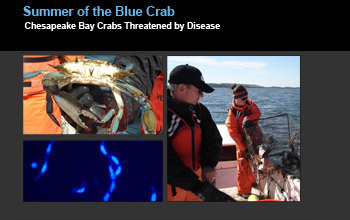 It's almost summer. Seafood restaurants from coast-to-coast are serving platter after platter of steaming crabs, ready for hammering and picking. The supply seems endless, but is it?

Not if we're talking about blue crabs from Chesapeake Bay.

The bay's iconic blue crab population has dropped to levels not seen since before restrictions were placed on the fishery more than five years ago. What's to blame?

A long and, by Mid-Atlantic standards, brutal winter has been fingered as one culprit. In one of the worst die-offs in recent history, more than a quarter of the Chesapeake's blue crabs perished in the frigid waters.

More than cold water to blame

But that's not the only factor, says disease ecologist Jeff Shields of the Virginia Institute of Marine Sciences in Gloucester Point, Va.

"Several commercially important crustacean populations, including blue crabs, have had declines linked to diseases," says Shields. "In most cases, though, the underlying causes have been difficult to pinpoint because crustacean pathogens [infectious agents] aren't very well known."

"We know very little about how disease affects populations of marine invertebrates and even less about how disease might interact with other stressors, such as overfishing," says Dave Garrison, director of NSF's Biological Oceanography Program, which also funded the research.

"This study is a major step toward discovering new ways of wisely managing our coastal resources."

One Chesapeake Bay blue crab killer may be a single-celled parasitic dinoflagellate named Hematodinium, a scourge that infects blue crabs and is of concern in fisheries not only in the Chesapeake, but around the world.

Outbreak in the crab pot and the shedding house

The parasite was first reported along the U.S. East Coast in the 1970s and found in the Chesapeake's blue crabs in the 1990s.

In a Hematodinium outbreak, some 50 percent of crabs caught in fishing pots may die. That number jumps to 75 percent in "shedding houses" where crabs molt their shells, then are collected for the soft-shell industry.

"Infection is almost always fatal--for the crabs," says Shields, who adds that the disease isn't harmful to humans.

In a breakthrough for blue crabs, Shields and colleagues recently succeeded in their effort to uncover the life history of Hematodinium.

"Describing the entire life cycle of Hematodinium is an important step toward controlling the infection," says Shields. "With all the parasite's stages in culture in the lab, we can learn when Hematodinium is most infectious."

The biologists made their discovery by looking at many parasite generations over a year-long period.

Answers under a microscope

Through the research, scientists now know that Hematodinium takes some 40 to 50 days to develop. "That matches what we see in the field," he says. "We think infection is linked with blue crabs' molting cycles."

Hematodinium usually infects young crabs. Some 50 to 70 percent of juvenile blue crabs along the Virginia coast carry the pathogen, "and it's prevalent in bays and inlets along the entire U.S. East Coast," says Shields.

The high cost--to the crab population and to the humans that depend on it--comes in the deaths of young blue crabs before they can make their way from coastal spawning grounds to brackish tributaries, where they become large enough to legally catch.

The parasite is after more than blue crabs, however.

"You can't fish out the blue crabs somewhere and hope this pathogen will be gone," says Shields. "It's also in many other crustaceans, including spider crabs, rock crabs and other swimming crabs."

Insights from the bay's shape

Outbreaks of Hematodinium are linked with certain geographic features, such as shallow bays, lagoons and fjords. "Such features are ideal for the growth and spread of pathogens, as they serve to focus transmissive stages or retain them within the system," writes Shields in a paper published in the Journal of Invertebrate Pathology.

Four factors may facilitate epidemics of Hematodinium and other pathogens: relatively "closed" host (crab) populations, with little immigration and emigration of juveniles and adults; bays with restricted water exchange with the open ocean, which hold in pathogens; stressful environmental conditions, such as overfishing and seasonal hypoxia, or "dead zones"; and pathogens that can rapidly multiply.

"The Chesapeake has several of these features," Shields says.

Shields and colleagues are working to understand how Hematodinium is transmitted in wild crustacean populations and at shrimp farms and other aquaculture operations. "We hope to develop 'best practices' for managing, in particular, the Chesapeake's wild blue crabs."

Diseases can have serious effects on commercial fisheries, Shields says. "But there's a perception among resource managers and fishers that diseases aren't important to the fishing industry, or that little can be done to manage them."

Too few fishery models use information like disease prevalence and distribution, according to Shields, and fisheries management decisions often don't consider disease.

"Estimates of disease-induced effects such as mortality or 'negative marketability' can be incorporated into existing models to improve stock assessment and management," Shields writes in the Journal of Invertebrate Pathology.

Disease may be the sleeper in the decline of the Chesapeake Bay blue crab.

Hard-hit by freezing temperatures, low-oxygen waters and overfishing, unless disease is taken into account, believes Shields, the next blue crabs caught may be headed not to your dinner table, but to the crustacean equivalent of the ICU.