Microorganisms: Studying the mechanics of their locomotion 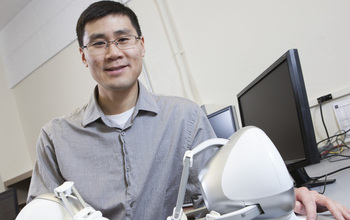 Henry Fu created a "Move Like a Microbe" simulation for public audiences and K-12 students.

Bacteria often must swim through intricate environments in the human body to get where they need to go. How they do it is what fascinates Henry Fu.

"A microbiologist might look at the biology, or biochemical pathways," says Fu, an assistant professor of mechanical engineering at the University of Nevada, Reno. "I am focused on the mechanics, rather than the biology."

Fu's goal is to understand the locomotion of bacteria and other microorganisms, such as sperm and protists, when they swim through such complex substances as mucus or bodily tissues. While both do contain fluid, they are more complicated than water, and bacteria almost certainly need different forces to navigate through them.

"People have tried to understand how they swim through regular water for a very long time, probably 50 or 60 years, but I want to know how this swimming is modified when they are swimming through things more complicated than water, like mucus," says the National Science Foundation (NSF)-funded scientist. "Mucus is more viscous and has elastic properties. People think of mucous as smooth and continuous, but it has a network of fibers. I'm looking at how those fibers interact with the microorganisms."

His work potentially has broad implications in the treatment of diseases, for example, in figuring out ways to block infection by halting a bacterium's movement, even after it has entered the body, such as in Lyme disease, where "bacteria have to burrow through your tissues to get to your bloodstream," Fu says. "Understanding how they do that could be potentially important in order to stop them."

The research also could prove valuable in reproductive health, where "the properties of mucus can affect the likelihood of fertilization," Fu says. "This could be important in treating infertility or contraception, when you could make it easier--or harder--for the sperm to move."

Researchers also could apply mechanical engineering lessons learned toward creating new drug delivery systems, such as nano-robots that could carry chemotherapy through the body to target a growing tumor.

Microorganisms swim by moving parts of their bodies. For example, many swimming bacteria have a tail-like flagellum, which rotates like a propeller, pushing them forward, while some algae have two flagella that "they can use like breast stroke," Fu says. "Part of what I am looking at is how they translate this motion into propelling themselves in the direction of where they want to go."

His research mostly is theoretical--in the computer and with pen and paper--designing models of these swimmers to see how they behave in different environments, and with variations to their swimming motions.

"What we do as modeling is based on well-known fundamental physics laws," he explains. "We could tell the computer the shape of a bacterium and its swimming motion, or how it is rotating, and the properties of the material or fluid it is moving in. We then ask it how it will move, and how much force and energy it will take. We might also ask what might happen if the flagellum or cell had a different shape."

Fu is conducting his research under an NSF Faculty Early Career Development (CAREER) award, which he received in June 2013. The award supports junior faculty who exemplify the role of teacher-scholars through outstanding research, excellent education, and the integration of education and research within the context of the mission of their organization. He is receiving $400,003 over five years.

As part of the grant's educational component, he plans to create "Move Like a Microbe," a simulation of microscale microbial locomotion that "will bring the research to life for the public, and K-12 students, by providing a hands-on demonstration of how microorganisms are able to swim, and explain the consequences of microbial locomotion in everyday life," he says.

"Because microorganism are so small and because what they experience in a fluid environment is different from what we expect, this demonstration helps put them in the shoes of a microorganism," he adds. "They can control it, and make it swim, and feel the forces that the microorganism feels--and they will be learning about what it's like to try to swim when you're a tiny thing."