"Out of Tibet" hypothesis: Cradle of evolution for cold-adapted mammals is in Tibet 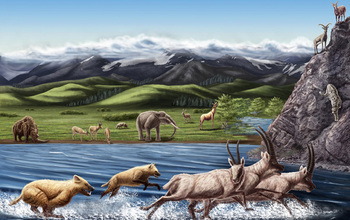 Artist's reconstruction of Zanda Fauna from the Pliocene about three to five million years ago.

The advance and retreat of the ice sheets also had a profound influence on the evolution and geographic distribution of many animals, including those that live in far northern regions.

New results from research conducted in the Himalayan Mountains and published this week in the journal Proceedings of the Royal Society B: Biological Sciences identify a recently discovered three to five million-year-old Tibetan fox, Vulpes qiuzhudingi, as the likely ancestor of the living arctic fox, Vulpes lagopus.

The finding lends support to the idea that the evolution of present-day animals in the Arctic traces back to ancestors that adapted to life in cold regions in the high-altitude Tibetan Plateau.

The paper's lead author is Xiaoming Wang of the Natural History Museum of Los Angeles County. Co-authors are Zhijie Jack Tseng from the University of Southern California, Qiang Li from the Chinese Academy of Sciences, Gary Takeuchi from the Page Museum at the La Brea Tar Pits and Guangpu Xie from the Gansu Provincial Museum.

The scientists, part of a team of geologists and paleontologists led by Wang, uncovered fossil specimens of the Tibetan fox in the Zanda Basin in southern Tibet.

The new fossil assemblage lends credence to a scenario the scientists call the "Out of Tibet" hypothesis.

It argues that some Ice Age megafauna--which in North America include the woolly mammoth, saber-toothed cat and giant sloth--used ancient Tibet as a training ground for developing adaptations that allowed them to cope with a harsh climate.

"The concept 'Out of Tibet' is an exciting insight for the origin of cold-adapted mammals of the Pleistocene," says Rich Lane, program director in the National Science Foundation's (NSF) Division of Earth Sciences, which funded the research.

"It parallels the 'Out of Africa' theory for the evolution of hominids. Together they may be a model for wider application in biological history and geography."

Tibet, Wang says, is a rich but grueling location for paleontological fieldwork.

Fifteen summer field seasons and a great deal of luck have led to his and his colleagues' successes.

Their expeditions involve a one-week journey to Lhasa, then a four-day drive into the remote "layer cake" sediments of the Zanda Basin--a drive made in old-model Land Cruisers known for becoming mired in streambeds.

At the more than 14,000-foot elevation, it's difficult to breathe, water freezes overnight in camps, and the scientists often must walk alone in search of fossils.

They've trained their eyes to search for ancient lake margins, where megafauna are reliably found.

Despite the challenges, Wang says that it's his favorite place to look for fossils.

"It's a pristine environment, the Tibetan people are kind, and in paleontological terms," he says, "it's relatively unexplored."