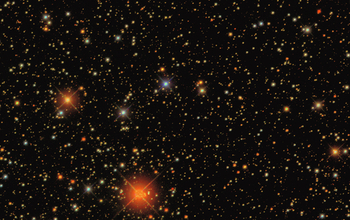 A color-composite image from the Sloan Digital Sky Survey shows a large number of red dwarfs.

The vast majority of the stars in our galaxy are known as "red dwarfs," small, cool bodies visible only through a telescope.

"They are the silent majority, a population historically underrepresented, meaning unstudied," says Andrew West. "Despite being ubiquitous, they are very faint, making them challenging to observe."

But, the National Science Foundation (NSF)-funded scientist and assistant professor in Boston University's department of astronomy thinks it is important to study them. He is convinced that the resulting information will help us learn how all stars form, and may provide "a small piece of the puzzle of trying to understand our place in the universe," he says.

"Understanding how the smallest stars form informs us as to how the planets form, and helps answer the question: Are we alone?"

Because red dwarfs are so common, they are more likely than other stars to have planets around them, a fact that makes astronomers wonder whether they present the best opportunity to discover planets that support habitable life.

"In terms of understanding how the smallest objects form, one of the most exciting things happening in astronomy is the study of planets around other stars," West says. "We now know for the first time in human history that almost every star has at least one planet, and it turns out that the red dwarfs appear to host more planets than other stars.

"Small planets are more abundant around small stars," he adds. "The most common stars in the galaxy appear to be the most common planet hosts, including planets we could envision walking on. If you were to put money around where we would find the most habitable planet, it's likely to be around a red dwarf."

The definition of the habitable zone of a star is whether liquid water can survive on its surface, given that life exists virtually wherever there is liquid water on Earth. Too far from a star, and a world is too cold, freezing all its water; too close to a star, and a world is too hot, boiling off all of its water. Since red dwarfs are cold compared to the sun, planets would have to be very close in to be habitable to life.

"When we find the nearest habitable world that humans will travel to, it's likely to be around one of these red dwarf stars," West says.

West says one big unanswered question is how the very smallest stars and brown dwarfs--objects less massive than stars, but more massive than planets--form.

"We really don't understand the details of how these processes work," he says. "They have not been studied in great detail in the past, and there is a lot of uncertainty about the mechanisms that lead to forming stars of this size or brown dwarfs, these 'failed' stars, if you will."

Typically, stars form within clouds of dust and gas when there is sufficient mass to collapse by gravitational attraction. As the cloud collapses, the material at the center begins to heat up, a hot core in the heart of the collapsing cloud that ultimately will become a star.

"A big cloud of hydrogen gas may spit out a thousand stars," West says. "It spits out stars with a variety of masses, but the number of stars in each mass is not uniform. We know from previous work that there are all different sizes, higher mass stars and lower mass stars.

"But when you get to the end of the stellar sequence, to forming the small ones, we don't really have a good idea of how many stars get formed in the process," he adds. "It turns out that this is a very important data point that can help constrain different scenarios of star formation."

"I'm looking at the bottom, the least massive stars and how they form, and my guess is that there's not one scenario by which all stars form," he says. "I think we will likely find that some of the theoretical predictions are not viable, and I think we also will find that multiple models will agree with the data. It's reasonable to think that there are a couple of ways to form stars."

West is conducting his research under an NSF Faculty Early Career Development (CAREER) five-year award, which he received in 2013. The award supports junior faculty who exemplify the role of teacher-scholars through outstanding research, excellent education, and the integration of education and research within the context of the mission of their organization.

He is conducting two major experiments as part of the research. He will be using data from the Discovery Chanel Telescope at Lowell Observatory in Flagstaff, Ariz., to count the number of red dwarfs within the same volume of space. He also is studying pairs of binary stars (two stars orbiting around a common center of mass) from existing survey data that he can access online to count the number of red dwarfs and see how separated they are from each other.

"Computer simulations tell you how many binaries there should be; they make a prediction as to what you will see, so I get to see which of those predictions are true, and which are not," he says. "We'll be using other simulations that predict numbers and the properties of the binary stars, and then we will see whether those predictions hold. We will probably find that some things work, and some don't, and we'll go back to the theorists who will have to retune their models."

As part of the grant's educational model, West has created the BU Pre-MaP (Boston University Pre-Majors Program) for first-year undergraduates, modeled after a similar program he helped start at the University of Washington, while he was graduate student there. The program, which has an emphasis on historically under-represented students, identifies freshmen who are interested in science, and assigns them mentors. These may include advanced or graduate students, post-doctoral fellows and even professors, who can help with the transition from high school to college.

BU Pre-MaP also matches them with a researcher and a research project, so they can "become involved in research their first semester in college," West says. "They work on a research project, and learn some of the basic skills of conducting research. This increases the participation and diversity in astronomy, and in STEM [science, technology, engineering, and mathematics] disciplines."

Related Awards
#1255568 CAREER: Probing the Extremes of Star Formation: A Census of Very Low-Mass Stars and Brown Dwarfs in the Local Neighborhood