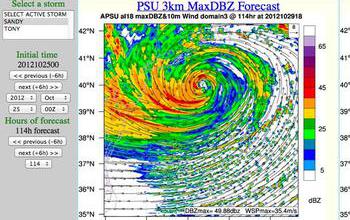 A snapshot of Hurricane Sandy from the Penn State real-time hurricane analysis and forecast system.

The following is part three in a series of stories that highlight recent discoveries enabled by the Stampede supercomputer. Read part one, two, four and five to find out how Stampede is making a difference through science and engineering.

Working with researchers at the National Oceanic and Atmospheric Administration (NOAA), Fuqing Zhang and a team of weather modelers at Penn State University have created an improved method of hurricane forecasting that incorporates high-resolution airborne radar observations from the inner core of the storms. This approach has shown great promise for hurricane systems, but requires significant additional computation.

Using the National Science Foundation-supported Stampede supercomputer, Zhang re-forecast the more than 100 tropical storms that occurred between 2008-2012, applying his new method. He showed that the new system reduces Day-2-to-Day-5 intensity forecast errors by 25 percent compared to the National Hurricane Center's official forecasts. The simulations are described in detail in a research paper in the Bulletin of the American Meteorological Society.

A more accurate prediction system will allow emergency management officials, the private sector, and the general public to make more informed decisions during major storms, minimizing the losses of life and property.

In order to assimilate large amounts of Doppler radar data and merge it with physical models of hurricane formation and information about historical precedents, Zhang made extensive use of Stampede and its advanced technologies.

"The increased computing power of Stampede has allowed us to run numerous sensitivity experiments for hurricane models at a higher resolution, allowing us to see details more clearly," Zhang said. "Especially for the hybrid data assimilation system, the improved computational performance of Stampede over previous supercomputer platforms gives us more flexibility in configuring the domain size and grid spacing that will be used."