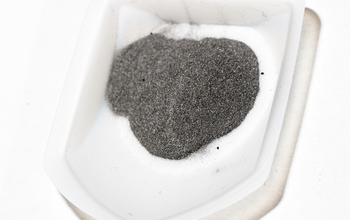 While electric vehicles offer many advantages--including reducing greenhouse gas emissions and the country's dependence on imported petroleum--at least one barrier stands in the way of their large-scale adoption: "range anxiety."

The current 2014 electric Nissan Leaf, for example, has a range of just 84 miles on a fully charged battery.

With support from the National Science Foundation, researchers at George Washington University, led by Stuart Licht, think they have developed a novel solution, and they're calling it the "molten air battery."

These new rechargeable batteries, which use molten electrolytes, oxygen from air, and special "multiple electron" storage electrodes, have the highest intrinsic electric energy storage capacities of any other batteries to date. Their energy density, durability and cost effectiveness give them the potential to replace conventional electric car batteries, said Licht, a professor in GWU's Columbian College of Arts and Sciences' Department of Chemistry.

The researchers started with iron, carbon or vanadium boride for their ability to transfer multiple electrons. Molten air batteries made with iron, carbon or vanadium boride can store three, four and 11 electrons per molecule respectively, giving them 20 to 50 times the storage capacity of a lithium-ion battery, which is only able to store one electron per molecule of lithium.

Other multiple-electron-per-molecule batteries the Licht group has introduced, such as the super-iron or coated vanadium boride air battery, also have high storage capacities. But they had one serious drawback: They were not rechargeable. Rechargeable molten batteries (without air), such as a molten sulfur battery, have been previously investigated, but are limited by a low storage capacity.

The new molten air batteries, by contrast, offer the best of both worlds: a combination of high storage capacity and reversibility. As the name implies, air acts as one of the battery electrodes, while simple nickel or iron electrodes can serve as the other. "Molten" refers to the electrolyte, which is mixed with reactants for iron, carbon or vanadium boride, then heated until the mixture becomes liquid. The liquid electrolyte covers the metal electrode and is also exposed to the air electrode.

The batteries are able to recharge by electrochemically reinserting a large number of electrons. The rechargeable battery uses oxygen directly from the air, not stored, to yield high battery capacity. The high activity of molten electrolytes is what allows this charging to occur, according to Licht.

The electrolytes are all melted to a liquid by temperatures between 700 and 800 degrees Celsius. This high-temperature requirement is challenging to operate inside a vehicle, but such temperatures are also reached in conventional internal combustion engines.

The researchers continue to work on their model to make the batteries viable candidates for extending electric cars' driving range. In the Licht group's latest study, the molten air battery operating temperature has been lowered to 600 degrees Celsius or less. The new class of molten-air batteries could also be used for large-scale energy storage for electric grids.