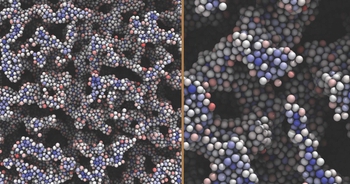 Peering into a colloidal gel, from the research group of Roseanna N. Zia, Cornell University.

[The following is part four in a series of stories that highlight recent discoveries enabled by the Stampede supercomputer. Read part one, two, three and five to find out how Stampede is making a difference through science and engineering.]

Cornell University researchers are using the Stampede supercomputer at the Texas Advanced Computing Center to help explain a nanoscale mystery: How can a colloidal gel--a smart material with promise in biomedicine--maintain its stability?

Colloidal gels are comprised of microscopic particles suspended in a solvent. They form networks of chained-together particles that support their own weight under gravity. For this reason, the soft solids form an emerging class of smart materials such as injectable pharmaceuticals and artificial tissue scaffolds. However, they are also beset by stability problems.

Using Stampede, researchers conducted the largest and longest simulation of a colloidal gel ever recorded. Their simulations helped answer several questions, including: What are the concentration and structure of the network strands? How does the gel restructure itself over time? And how does its structure affect a gel's mechanical properties?

"We have been absolutely happy with our entire experience on Stampede," said Roseanna N. Zia, an assistant professor of chemical and biomolecular engineering at Cornell. "The support of the review panel in granting such a large series of requests was just fantastic. In addition, the help desk has been consistently outstanding, and our XSEDE [Extreme Science and Engineering Discovery Environment] Campus Champion was a huge help in getting started. There is no way this study could have taken place without XSEDE's computational support."

XSEDE is the most advanced and robust collection of integrated advanced digital resources and services in the world. Thousands of scientists use XSEDE each year to interactively share computing resources, data and expertise. The five-year, $121-million project is supported by the National Science Foundation.

Zia presented the results on her colloidal gel research at the Society of Rheology annual meeting in October 2013. Her work was featured on the cover of the January 2014 Rheology Bulletin, and she was asked to contribute to an invitation-only special issue of the Journal of Rheology in 2014.