Researchers use NSF-supported Stampede supercomputer to improve catalysts for conversion 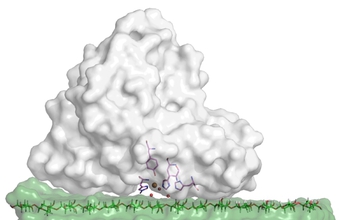 Active site model of a critical enzyme in T. aurantiacus, a heat-loving mold.

[The following is Part six in a series of stories that highlight recent discoveries enabled by the Stampede supercomputer. Read parts one, two, three, four and five to find out how Stampede is making a difference through science and engineering.]

In a paper published in the Proceedings of the National Academy of Sciences in January 2014, they describe a newly-discovered, naturally-occurring enzyme modeled with Stampede that could significantly speed up the process by which cellulose is decomposed. The enzyme, called lytic polysaccharide monooxygenase or LPMO, represents an important, unique discovery because of its prevalence in nature, and its potential importance to cost-effective biomass deconstruction.

Using Stampede, the researchers examined two ways that the fungal enzymes catalyze reactions. The simulations suggest that the binding of copper and oxygen by the enzymes is critical to its function. The group is also using Stampede to design chemical catalysts for high-temperature deoxygenation chemistry, which is important to convert biomass to fuels.

Said NREL Senior Engineer Gregg Beckham: "Stampede has been an absolutely essential resource for our group to examine biological and chemical catalysts important for the production of renewable transportation fuels from lignocellulosic [plant-based] biomass."