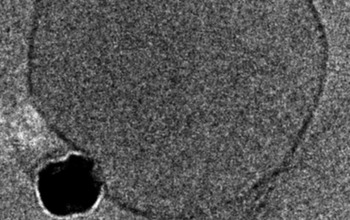 This image shows an iron oxide nanoparticle binding to a cell membrane.

Sometimes breakthrough materials with important benefits to society pose environmental risks that aren't apparent until decades later. In the growing field of nanotechnology--the creation of materials or processes at the nano-scale--researchers are trying to identify potential hazards before new products are in widespread use.

"Too often in the past we don't know whether something will become a risk until it's too late and it's already out there," says Geoffrey Bothun, an associate professor of chemical engineering at the University of Rhode Island. "Rather than create products with nanomaterials in them and simply releasing them into the marketplace, the field wants to get a better handle on what sort of environmental or safety risks are associated with these materials."

Nanotechnology offers the potential for many new applications in medicine, electronics, energy and biomaterials but, like any new technology, it also raises concerns about possible toxicity to humans and the environment from long-term exposure.

"There is a lot of excitement over what nanotechnology can do for job creation, new product development and better materials," Bothun says. "It's thought to be the new industrial revolution. But scientists, engineers and policy makers want to get ahead of the game and guide the design of the best materials with the least environmental impact."

The National Science Foundation (NSF)-funded scientist specifically is studying how engineered nanoparticles bind to cell membranes, and the impact of the process on the membrane itself.

"We don't know enough about how these physical interactions are taking place, and to what degree they contribute to toxicity," he says. "Nanoparticles can and do inhibit or kill cells. In some cases, that's what they are supposed to do. For example, there are a lot of natural antimicrobial molecules that bind to a membrane, disrupt it and break holes, leading to cell death."

Nanoparticles exist in many products that come into close contact with humans, among them, clothing, medicine, cosmetics and sunscreen.

"Silver nanoparticles, for example, are in hunting gear and athletic clothing and act almost like an antibiotic," Bothun says. "They kill bacteria that cause stinkiness largely by releasing silver ions. We're exposed to this silver all the time, but whether or not it is dangerous is somewhat unknown."

His research goal is to learn enough about what happens in nanoparticle-membrane interactions to allow experts to use this information in predicting whether the particles will prove toxic. "If we understand the mechanisms behind how these particles stick to cells, that should help us design particles that could selectively bind to, for example, bacteria and not human cells," he says.

Bothun is conducting his research under an NSF Faculty Early Career Development (CAREER) award, which he received in 2011. The award supports junior faculty who exemplify the role of teacher-scholars through outstanding research, excellent education, and the integration of education and research within the context of the mission of their organization.

He and his team use transmission electron microscopy (TEM) to study synthetic bacterial cell membranes they create and then expose to different types of nanoparticles. "We can change the membrane composition, and nanoparticle type and composition and size," he says. "We've got a lot of variables we can play with on both sides. With TEM we can directly image nanoparticle membrane binding and changes that occur in the membrane as a result of this binding."

As part of the grant's educational component, the scientists have enhanced a freshman general education course at the university with the goal of educating students about the social, economic and environmental impacts of nanotechnology, as well as the need to effectively communicate emerging technologies to broad audiences. They also plan to sponsor professional development activities, including research and specialized workshops, to supplement the curriculum.

"The goal here is to inform and excite high school students about nanotechnology, and all of the STEM (science, technology, engineering and mathematics) fields, and to show them how nanotechnology will have an impact on their lives in the future and the role they can play," Bothun says.