Bees from the inside out 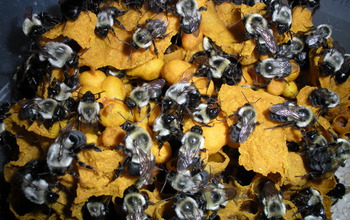 Members of a Bombus impatiens (bumblebee) colony within the nest.

It is 1,825 miles from New Haven, Conn., to Austin, Tex., which typically means 30 hours of driving and three nights in motels, not an easy trip for anyone. But for researchers moving from Yale University to a new lab at the University of Texas last August, it proved especially challenging. They made the journey in a minivan with a pet cat and 100,000 bees.

"That was probably the most heroic event in our beekeeping saga to date," says evolutionary biologist Nancy Moran, a professor at the University of Texas at Austin, who studies symbiosis, particularly among multi-cellular hosts and microbes. "We didn't want to be without bees upon arrival in Texas, and it wasn't a good time of year to start new colonies."

The bees--chauffeured by graduate student Waldan Kwong and postdoctoral fellow Gordon Bennett--traveled in boxes nailed shut, with duct tape over the cracks between the boxes, so they couldn't fly around in the minivan, and wire mesh over the front, so they could cool themselves, but not escape. They also received wet sponges at regular intervals to keep them hydrated.

"They [Kwong and Bennett] just turned up the air conditioning all the way, and wore sweaters," Moran says. "Bees are less excitable when it's cooler. At night, they waited to park the minivan until after dark, and then opened the windows so the bees didn't overheat in the closed space. It seemed unlikely that anyone would try to steal something from a van full of bees."

The bees arrived in Austin with no problems, and now live on top of a building on campus, "where their main forage might be drops of soda on discarded cans around campus," says Moran, who for many years studied the maternally transmitted symbionts of aphids and other sap-feeding insects, but has expanded in recent years to bees. Symbionts are organisms that co-exist and depend on each other for survival.

"I've worked for many years on genomic evolution in bacteria, but also love insects and insect biology," she says. "So this is a system that has both."

Understanding the gut microbes in bees

Today, the broad aim of her research is to understand the diversity and function of the gut microbiota in honeybees and bumblebees, emphasizing genomic approaches, not unlike the current research interest in the human microbiome.

"It has a number of parallels with the gut microbiota of humans and other mammals, because it is a long co-evolved and specialized bacterial community, and because it impacts the health of the hosts," she says.

The gut microbiota is another dimension of animal biodiversity, particularly when the animals have distinctive and co-evolved bacterial species in their guts, Moran says.

"In insects, this doesn't always appear to be true--many seem to have a selected set of bacteria taken up from the environment, and the bacteria can live in a range of habitats outside the gut," she says. "But in honeybees and bumblebees, the gut is dominated by a small number of tightly related groups.

"Why? The primary reason seems to be that sociality--social interactions--gives a route for dependable transmission between individuals. Interactions within the bee colonies are the basis for transfer of the symbionts to newly emerged adult bees. This is where the system parallels that of humans and other mammals, all of which are social at least to the extent of having extended maternal care. Gut symbionts of mammals are specialized and transmitted via these social interactions."

Microbial gut symbionts are essential for the life of most animal species, but their diversity and functions in hosts and their responses to ecological disturbance are poorly understood, she says. Apis mellifera, the honeybee, has a distinctive set of about eight symbiotic bacterial species, some of which occur in other Apis species and in the related genus Bombus--bumblebees.

Bees, of course, are critically important ecologically and economically, particularly in agriculture, where honeybees pollinate an estimated $15 billion worth of agricultural products in the United States, including more than 130 fruits, according to the U.S. Department of Agriculture. In recent years, however, there has been increasing concern over rampant bee colony losses, dubbed "Colony Collapse Disorder," and the overall health of bees in general. [Colony Collapse Disorder ]

While Moran and her colleagues are primarily trying to gain a basic understanding of biodiversity and function in the bee gut microbial community system, "some bumblebees are becoming rare and have shrunken ranges. Are we also losing diversity of their gut microbiota, and will this be a factor in trying to conserve these species?" she asks. "Are problems with gut microbiota part of the problem of honeybee health, or could microbiota be preserved in a way that helps bees thrive?

"A big part of the problem with bee health is undoubtedly the decreasing availability of diverse floral resources, and possibly nesting sites in the case of bumblebees," she adds. "But exposure to toxins and to diseases also play a part, based on numerous studies. Gut microbes very plausibly play a role in host resistance to these things, and also in improving nutrition. So we hope that we find something useful for bees."

Moran's research has revealed that bacteria in the guts of honeybees are highly resistant to the preventive antibiotic tetracycline--probably the result of decades of exposure to it because of its use by beekeepers to prevent bacterial diseases. Moran's team identified eight different tetracycline resistance genes among U.S. honeybees that were exposed to the antibiotic, but the genes were largely absent in bees from countries where such antibiotic use is banned.

"In the bee system, even though transmission is mostly within colonies, the symbionts are much more likely to undergo horizontal transmission," she says, meaning transmission among members of the same species that are not parent and child. "This has massive consequences for patterns of genome evolution in the symbionts. Because they are undergoing recombination, and have larger genetic population sizes, they retain normal genome sizes, and have far more dynamic genomes.

"The antibiotic resistance study was an early hint about the dynamic nature of these genomes," she adds. "It turns out that in the United States, antibiotics have been used widely in beekeeping since the 1950s, mostly tetracycline. And the gut microbiota of U.S. honeybees is a treasure trove of tetracycline resistance genes that have been horizontally transferred from other bacteria. Now we are finding that strains of the bee gut microbiota show a large set of 'accessory' genes and functions. A given strain can have hundreds of genes that are not present in another strain of the same species, and that affect functions such as sugar metabolism, or ability to break down components of pollen cell walls."

Until recently, none of these bacterial species had been cultured in the lab, "but now all of them can be," she says, crediting the work of Kwong, and Philipp Engel, a postdoctoral fellow now in Switzerland.

"In fact, we have given official names to the bacterial species that are our main focus: Snodgrassella alvi, Gilliamella apical, and Frischella perrara," named after three biologists who made major contributions in honeybee biology, Robert Snodgrass, Martha Gilliam and Karl von Frisch.

"These three live together in one part of the honeybee ileum (part of the digestive tract), and two of them also live in bumblebees," she says. "But we are finding that there are diverse strains within each species, and that different bee species and different colonies within a species seem to have different strains of symbionts."

Another postdoctoral fellow in her lab, Hauke Koch, was the first to find that gut symbionts of bumblebees protect against protozoan parasites, "so we are trying to see if the same is true in honeybees, and also to extend the findings in bumblebees," she says.

She and her collaborators also conducted a survey of gut symbionts in three bumblebee species to determine whether environmental factors--especially agricultural management or geographic location--affected symbiont communities.

"And it turns out that different bumblebee species all have some of the same symbionts, particularlySnodgrassella and Gilliamella, but one bumble bee species seemed to sometimes miss being inoculated," she says. "The 'right' symbionts are simply absent from some individuals. This is very different from honeybees, where every worker bee has the main symbionts, and we think it might relate to their different life cycles and social lives."

This work provides a baseline for understanding how the gut microbiota of honeybees and bumblebees varies among colonies, and how this variation might affect colony health.

"By establishing methods for culturing and type strains that can be studied by different laboratories, we can start to untangle the mechanistic basis for colonizing hosts," she says. "And we can start to understand how the normal microbiota interacts with disease agents that infect bees."

The temperament of bees

When it's time to start new colonies, Moran's lab orders bees from different places around the country, but favors northern California bees because of their "very sweet personalities," meaning they stay calm when the hive is opened, and don't line up in an aggressive manner, preparing to attack, she says. "One can approach the hives without alarming them," she says. "Feisty bees are touchy and prone to attack when someone just gets close to the hive. We had some Texas bees, but they were a bit feisty, perhaps they did not like being plopped down in New England," before she moved to Austin.

Lab technician Kim Hammond cares for the bees and has developed into a master beekeeper, Moran says. "In fact, maybe she's too good –we can't recover the disease organisms that most beekeepers complain about, even when we would like to sample them in our colonies. She keeps the bee colonies very healthy, and we sometimes cannot detect pathogens that are generally common.

"The main ones are Nosema species, which are eukaryotic pathogens related to fungi, and RNA viruses, such as `Deformed Wing Virus,"' she adds. "In some of our experiments we want to infect bees with pathogens, to see if the microbiota protects against pathogens. In those cases we have to go to other beekeepers to try and find the disease organisms."

New to bee research and wanting to learn the basics of beekeeping, Moran actually kept several colonies in her own yard for several years.

"But I have to admit I am afraid of stings," she says. "Yes I did get stung a few times. In working directly with the colonies, it is usual to occasionally be stung. Of course we wear bee suits. In the lab, we mostly work with young worker bees, which do not sting much, plus we have them contained. If a student researcher is worried about stings, we just have them work on aspects that have no risk. But we do keep an epinephrine kit around for possible cases of a sting of someone allergic who might not realize the risk. So far we haven't had anything at all serious."

And, of course, there is at least one sweet fringe benefit of the research. "We get honey, which is very helpful as gifts to make people worry less about being stung," she says.