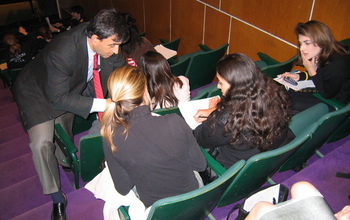 Eric Mazur listens in on a student discussion during a Peer Instruction class.

In May, the Minerva Academy named Harvard University physicist Eric Mazur the inaugural recipient of its $500,000 Minerva Prize for Advancements in Higher Education. In particular, the announcement recognized Mazur's dedicated role in the development of an innovative teaching practice known as "peer instruction." Since Mazur first conceived of peer instruction, the Division of Undergraduate Education (DUE) at the National Science Foundation (NSF) has been a close and committed partner, supporting Mazur's effort to develop, assess, and disseminate this practice in undergraduate science, technology, engineering, and mathematics (STEM) classrooms. Today, Mazur's peer instruction practice is used in classrooms throughout the world.

Uncovering the fallacy of learning in undergraduate physics education

Mazur gives most of the credit for his inception of peer instruction to serendipity. In 1984, when he first began teaching undergraduate physics at Harvard, Mazur recalls, "I never asked myself, 'How am I going to teach?' or 'What am I going to do in the classroom?' In my mind, it was perfectly clear: I would lecture and do what my teachers had done."

Mazur's students reported enjoying his lectures and they seemed to do well on his exams. "For seven years, I thought I was the world's best physics teacher," says Mazur.

But then, one day, Mazur came across an article by Ibrahim Abou Halloun and David Hestenes, published in 1985 in American Journal of Physics. The article, titled "The initial knowledge state of college physics students," stated--bluntly--that the majority of students exiting introductory physics courses did not truly understand basic Newtonian concepts and, hence, failed to comprehend most of the content of the course. The majority of students who passed had done so based solely on rote memorization.

The sentiment in the article resonated throughout the physics education community. Mazur reflected on his own students, who were carefully selected through Harvard's rigorous admissions process.

"I thought, that's simply not possible," recalls Mazur. "So I decided that I would show that my students--Harvard students--actually do learn the physics, unlike the students reported on in the article. I gave the Force Concept Inventory to my class, and that's when the house of cards collapsed...When the test had been completed, it was clear: My students weren't actually learning but were memorizing by rote and solving problems by rote. I was in shock."

Frustrated, Mazur's students asked if he would hold a special review session to cover the questions on the concept test. Mazur booked a large lecture hall for the evening. After explaining the solution to one relatively simple question--multiple times--Mazur realized that the class was lost, even though half had answered the question correctly on the test. At that point, he asked the students to discuss the answer with their neighbors.

"Previously, I had always been the center of attention. The class erupted in chaos, with 250 students talking to each other all at once. And within two minutes, the class had figured out the solution, whereas I--the expert--had tried for 10 minutes, without success," Mazur recounts. "I started to think about it, and it just made sense. One student is more likely to convince his or her neighbor than the professor, because that student has just recently learned the concept and knows what a beginning learner struggles with, unlike the professor, to whom the problem is entirely clear."

Susan Singer, division director of NSF's Division of Graduate Education (DUE), notes that this phenomenon is what cognitive scientists have long recognized as the "expert blind spot."

This was the moment that Mazur calls "serendipitous" in his development of peer instruction. Watching the successful outcome of students working together to negotiate answers led him to the inspiration that this approach could be formalized into a teaching method. "As the instructor, I can only provide one point of view. But when students talk in pairs, they turn a large lecture into a seminar."

In his effort to develop this form of group work into a rigorous, verified teaching practice, Mazur's next step was to apply for funding from NSF. He notes that he was initially turned down, but persevered, because he deeply believed in the importance of peer-led learning.

In 1992, Mazur received his first education research grant. DUE funding program officer Terry Woodin, who first met Mazur at a NSF principal investigator's conference on the future of STEM education, recalls Mazur lamenting "that his research work in physics was noted and used by other physicists as soon as the day after publication, whereas his educational findings disseminated slowly, if at all. Eric was determined to change that issue, and he has."

In the years that followed, Mazur developed the innovative practice, implemented it, assessed student learning outcomes to establish the practice's efficacy, and then embarked down the pathway of scale-up and dissemination. "The number of people, both nationally and internationally, who are aware of and using Eric's approach to teaching is truly amazing," says Woodin. "His contribution to finding ways to alert the entire physics community to what works in education is one of the reasons I admire his work so much."

Mazur credits Pearson Education for its support in the wide-scale dissemination of the peer instruction teaching practice. In 1997, the publisher produced "Peer Instruction: A User's Manual," authored by Mazur, and promptly gave away thousands of copies to ignite interest within the teaching community.

Other grants supported the development of online educational resources. For example, the use of electronic clickers as polling devices became widespread in physics education following Mazur's incorporation of this technology with concept questions into the undergraduate classroom. Another grant helped Mazur build a community of practice around electronic resources for instructors using Peer Instruction.

DUE program officer Corby Hovis, who has a background as a physics educator, reinforces that what is most striking about Mazur's story is "the level of sustained support over time that was necessary to bring a simple teaching concept to widespread use." (Indeed, Mazur's story is not alone in this regard. See a recent article on NSF's long-term support of Social Explorer, an innovative teaching tool now widely used in the undergraduate sociology classroom.)

Hovis also notes that one grant funded a project that investigated the effect of peer instruction on teacher evaluations. "Many faculty members fear that if they adopt something different--something less instruction-oriented--that students won't like it, and it may show on evaluations and ultimately affect tenure," says Hovis.

Mazur comments that while "generally, students have been positive to being the experimental subject," others have approached him to express their frustration in paying tuition to attend a class in which they are effectively being asked "to teach themselves." However, says Mazur, "what they don't realize is that I can't do the learning for them. To them, it's not immediately obvious that they'll end up doing better, so they resist."

Following his study of the impact of peer instruction on teaching evaluations, Mazur found that students with the highest expectations for a lecture-based format were least satisfied, whereas students who had been exposed to alternative teaching methods tended to be more satisfied with their learning experience in his classroom. Either way, Mazur did earn tenure as part of Harvard's faculty, where he remains today.

From pushback to the Minerva Prize

Mazur reflects that his development and dissemination of peer instruction have not been without challenge. Pushback has come both from within the classroom and from the educator community.

"Innovation is hard. Many innovations die--not because they're not good, but simply because there's pushback. Being at an institution like Harvard helped, because I was less likely to be discredited, but you have to work really hard to induce change," says Mazur.

Singer echoes this sentiment, stating that "one of the reasons that Eric has been so successful is that he's a highly respected physics researcher, in addition to being a first-rate education researcher. Pursuing education research with such a high quality approach really underscores its importance and contribution."

Among the education-minded, the Minerva Prize has been likened to a Nobel for education researchers.

"The prestige is right up there with the Nobel Prize--it makes an incredibly important statement to the world about the value of education," says Singer.

Reflecting on winning the inaugural Minerva Prize, Mazur says, "The prize is recognition for that one moment in the past, when I first asked my students to discuss their work with each other. That was my 'wow' moment," also noting that, "the prize brings increased credibility, and with it, comes an increased responsibility to continue to endeavor to improve education."

Assessment innovation as the next big hurdle in STEM education

Years after publishing the Force Concept Inventory, Hestenes continued to defend his position publically, echoing the sentiment of one professional colleague who called the state of physics education "amateurish." In a 1998 publication in the American Journal of Physics, Hestenes suggested that significant reform and improvements were needed in physics education, in addition to the development of a program of physics education research.

When asked what he plans to focus on next, Mazur states that he is turning his attention to assessment.

"Students don't study to learn. They study to pass the test," he says. "So how we construct the test impacts how students learn. It's the tail that wags the dog."

For Mazur, assessment holds everything in place.

"It's the link between K-12 education, post-secondary education, and graduate education," he says. "Unless we start really thinking about a more meaningful assessment of skills over content, we're never going to educate the leaders of tomorrow, just the followers of yesterday."