Border crossing: 10 things to know about invasive fire ants on the march

Are fire ants using habitat corridors to advance the front? 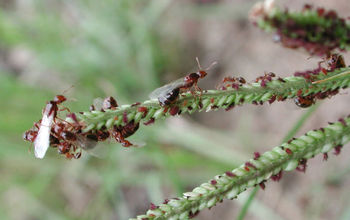 Invasive fire ants: They're on the march across the U.S. Southeast and beyond.

Heading for a summer picnic or hike, or just out to mow your lawn? In the U.S. Southeast and beyond, you might want to watch where you walk.

Fire ants. Crossing the border from South America, they're on the march northward. How does habitat--in particular, corridors that connect one place with another--help the ants spread?

To find out, the National Science Foundation (NSF) talked with ecologist and program director Doug Levey of the Division of Environmental Biology in NSF's Directorate for Biological Sciences, and researcher Julian Resasco, now of the University of Colorado Boulder (formerly of the University of Florida, Gainesville).

This week, Resasco, Levey and colleagues published a paper in the journal Ecology, reporting new findings on habitat corridors and fire ants. They conducted their NSF-funded study in an experimental forest in South Carolina at the U.S. Department of Agriculture (USDA) Forest Service - Savannah River site.

1. Where did fire ants come from, and where are they found now?

Resasco: Fire ants are native to South America, where they're found from western Amazonia to northeastern Argentina. Fire ants were accidentally introduced by humans to the southeastern U.S. almost a century ago. Now, they're established in parts of the Caribbean, China, Southeast Asia, Australia and New Zealand.

2. Why are fire ants a problem?

Resasco: Fire ants are very aggressive, have painful stings and can occur at high densities. They can displace native ants and other kinds of small animals, including reptiles, birds and mammals. Because they have a broad diet that includes plants, they're a major economic problem in agriculture. The USDA estimates that fire ant control, property damage from the ants and medical treatment from stings cost several billion dollars each year.

3. How do fire ants disperse?

There are two social forms of fire ants and they disperse very differently. In the monogyne social form (named for having a single, egg-laying queen), mated queens fly high in the air and establish new colonies--often miles away from their original colonies. In the polygyne social form (named for multiple, egg-laying queens), mated queens disperse poorly, establishing new nests near their original colonies. Fire ants can also be accidentally transported over long distances by human commerce and travel.

4. Why are some types of fire ants worse than others?

5. What is a habitat corridor and why is it useful in conservation?

Levey: Corridors are strips of habitat that join otherwise isolated patches of the same habitat type. They're important because they facilitate movement of plants and animals from one patch to another. By linking small populations to each other, corridors create larger populations that are more resistant to extinction.

Resasco: Yes, but in one situation. In areas already dominated by the polygyne form, we found that patches of habitat connected by corridors had higher fire ant densities than did unconnected patches. In areas dominated by the monogyne form, however, corridors had no effect on fire ant densities. This difference is likely because monogyne queens can easily colonize isolated patches. Polygyne queens, having more limited dispersal, appear to benefit from the connectivity that corridors provide.

Resasco: There is no evidence that habitat corridors assist in the spread of other invasive species. We think this is because invasive species are usually already good dispersers--the best example is the monogyne form of fire ants.

8. Can we figure out in advance when corridors will help species invade?

Levey: We think the best way to predict which species will benefit from corridors is by considering their natural ability to disperse. Species that regularly disperse long distances, or are easily able to travel through or above hostile habitats, are unlikely to respond to the presence of corridors. Species that are poor dispersers and tightly linked to a particular type of habitat are most likely to depend on corridors when traveling from one patch to another.

9. Overall, are corridors beneficial or detrimental?

Resasco: The balance of evidence strongly suggests that corridors are beneficial for conservation. Many studies have shown positive effects of corridors on dispersal and species diversity. The evidence of negative effects is much weaker. The more we understand about how corridors work, the better we can make informed decisions to maximize positive effects and minimize negative ones.

10. What surprised you the most in this study?

Resasco: The age of habitat patches seemed to be important in determining whether corridors facilitated dispersal by polygyne fire ants. We only saw a corridor effect in the most recently created patches. We hope to determine whether this effect is transient, or if higher densities of polygyne fire ants and lower diversity of native ants persist in patches connected by corridors.