Rust villages of the deep: In Pele's shadow, iron oxide, or rust, comes to life 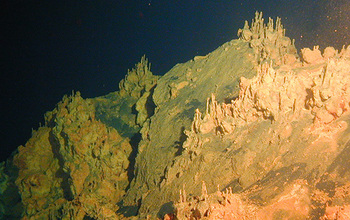 Pele. Her name brings visions of fire, lightning, wind--and volcanoes. Of the ancient Hawaiian goddesses, Pele, the "lady in the red dress," is the best known.

Locals believe that her powers formed Hawaii's chain of volcanic islands. The word pele means molten lava in Hawaiian. Volcanic eruptions, or Pele's tears, it's said, are her way of expressing red-hot emotions.

Science may offer another explanation.

The island volcanoes of Hawaii are the most recent evidence, researchers say, of an ancient process that created the 3,700-mile-long Hawaiian-Emperor Seamount Chain.

It's what goes on at the base of that chain, hidden in the depths of the Pacific Ocean, that interests marine ecologists David Emerson of the Bigelow Laboratory for Ocean Sciences in East Boothbay, Maine, Craig Moyer of Western Washington University, and Clara Chan of the University of Delaware.

What the scientists found there is "Pele red" in color: Iron oxide, or rust, come to life.

Villages of rust in the sea's depths

Along the Hawaiian-Emperor Seamount Chain at Loihi Seamount--an active submarine volcano 22 miles off the coast of the island of Hawaii and 3,000 feet below sea level--the biologists are conducting research on Zetaproteobacteria, life-forms that use iron as an energy source. Zetaproteobacteria form iron-rich microbial mats on Loihi's flanks.

This iron-rich cauldron is a perfect environment for Zetaproteobacteria.

"Iron is the fourth most abundant element in Earth's crust," says Emerson, "and is essential for life. For example, iron is the oxygen-carrying component of hemoglobin in blood."

What's less known about iron, he says, "is that it can support the growth of an array of microbes."

Zetaproteobacteria are the dominant bacteria in Loihi's iron-rich microbial mats. They're rarely found in other deep-sea or marine habitats, suggesting that they might be restricted to niches where iron is abundant.

Recent discoveries have expanded their range, however, and that of their distant relatives to deep within the ocean crust, iron deposits in salt marshes and to the corrosion on steel. "They're more cosmopolitan than anyone realized," says Emerson.

In fresh water, their kin are found in roadside ditches, slow-moving streams, wetlands and on the roots of submerged plants.

"One indicator of their presence is a metallic sheen on the water, which is sometimes mistaken for an oil slick," says Emerson.

It takes a village...of bacteria

"We don't usually think of bacteria as villages," he maintains. "For the Zetaproteobacteria that live at Loihi, that might be a good analogy, though. What they do with rust is remarkable."

"Zetaproteobacteria are the ultimate in sustainable architects," says Chan. "They recycle rusty minerals into building blocks."

With funding from the National Science Foundation (NSF), Emerson, Chan and Moyer are exploring the rust villages to learn the roles of their bacterial builders.

"These bacteria are a rare life-form that derives energy out of iron oxidation; that is, they sustain themselves by turning iron into rust," says Anton Post, program director in NSF's Division of Ocean Sciences.

The scientists are also interested in other species that may live side-by-side with Zetaproteobacteria, how the inhabitants all work together, and how the interaction of life and minerals contributes to a rust village.

"One of the fates of the microbial mat ecosystems," Emerson says, "is that they eventually turn into iron-rich stone."

Another is that the iron oxides the bacteria produce are widely dispersed in the ocean, where they're an iron source for plankton and other marine life.

The ability of Zetaproteobacteria to form iron oxide structures in sheaths or stalks is unique. These hallmarks, scientists say, are easily recognized under a microscope.

"Electron microscopy shows subtle differences that may be diagnostic of different populations of the bacteria," says Emerson.

"Zetas" can produce huge amounts of iron oxides connected by sheaths; 100 cells might crank out as much as 3 feet of sheath in one day. This complex matrix shunts water and nutrient flow in the villages.

The microbes may also influence geochemical cycling and mineral deposition on larger scales.

Zetas to the rescue?

Zetaproteobacteria colonize steel exposed to seawater, where they foster the release of iron from the steel's surface.

But now the Zetas' and their freshwater cousins' beneficial sides are coming to light.

The iron oxides they produce can act as filters, removing toxic metals like arsenic, lead and cadmium. The rust Zetas form also gets rid of organic pollutants such as pesticides, as well as nutrients like phosphorus that lead to overgrowth of algae in waterways, fast becoming a major problem in the Great Lakes and elsewhere.

The influence of Zetaproteobacteria and their clan may be far-reaching, spilling well beyond ocean depths.

Not so different from another architect who builds elaborate structures in shades of red: Pele herself.