Research could improve prevention and treatment option for restenosis 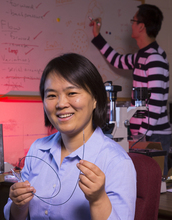 Linxia Gu holds a stent catheter used to insert stents in arteries and other blood vessels.

One of the biggest risks associated with a stent--a small, mesh tube inserted into a clogged artery to open it--is that the blockage will return, sometimes with serious or fatal consequences, a condition known as restenosis.

It is unclear how restenosis occurs, but Linxia Gu is trying to find out.

The National Science Foundation (NSF)-funded scientist, an associate professor of mechanical and materials engineering at the University of Nebraska-Lincoln, is trying to understand the changes that cells undergo after stents are implanted, and how they affect arterial tissue structures and the reoccurrence of arterial blockages.

Her research group plans to characterize the mechanical behaviors of both cells and tissue, and integrate the information using a computational model. The hope is that "this work will lead to the development of new therapeutics that will have a tremendous positive impact on the patients who undergo stent implantations," Gu says.

An estimated 600,000 Americans undergo the artery-clearing procedure, known as angioplasty, every year in the United States, according to the American Heart Association. However, there are risks, including restenosis, when too much tissue grows within the treated portion of the artery, causing the artery to become narrow or blocked again, restricting blood flow.

This typically occurs months later and without warning symptoms, and can lead to strokes or heart attacks and "induce long-term physical disability, especially among aging populations," Gu says. "To develop an effective treatment strategy, the key is to better understand the mechanism of restenosis from multiple scales."

Her research could, among other things, potentially help clinicians improve prevention and treatment options for restenosis, and help manufacturers design better stents.

"It could make a difference if you understand the changes at the cell and tissue level," she says, adding: "It also could affect the design of future stents."

Gu is conducting her research under an NSF Faculty Early Career Development (CAREER) award. The award supports junior faculty who exemplify the role of teacher-scholars through outstanding research, excellent education, and the integration of education and research within the context of the mission of their organization.

Gu estimates that from 10 percent to 30 percent of patients who receive stents will experience restenosis.

"It's one of the major complications associated with stent implantation, and usually occurs within six months, " she says. "We've had a couple of generations of stents, made of different structural designs and materials, but they all have these complications. A lot of factors come into play, and we want to understand the mechanism of restenosis, which is still not well understood."

Gu is using powerful computers to build computer models that will, essentially, allow her to peer inside the arterial wall, and also is testing actual cells and tissue, along with the computer simulations. She is using an atomic force microscope to study the mechanical properties of both the cells and the tissues.

"We are doing experiments involving cellular testing, trying to find out the role of the vascular smooth muscle cell and how the artery changes--arterial remodeling--as a result of the stent," she says. "We need to do both, to combine testing with the simulations."

One major challenge will be to relate the mechanical behavior at the cellular level cells to whatever is occurring in the broader scale of tissues, she says, a mathematical task known as multiscale modeling. The goal is to combine cell and tissue behaviors in order to predict what actually happens during in-stent restenosis, she says.

As part of the educational component of the grant, Gu wants to recruit more women and students from other underrepresented groups into the mechanical engineering field, trying to find new ways to involve graduate and undergraduate students, particularly women and persons with disability, in her project.

"Because this research utilizes a mechanical principle to solve a biomedical problem, I hope to entice women and persons with disability into mechanical engineering," she says. "Studies have shown that women are more attracted to biomedical engineering to improve the quality of people's lives. Almost everyone knows something about stroke or heart attack. The relevancy of this project might engage students from underrepresented groups to pursue an engineering degree."

She also is developing new undergraduate curricula, and preparing school-age presentations for the University of Nebraska State Museum about the importance of engineering in solving medical problems, and is recruiting high-school science teachers to work in her lab so they can share their research activities with students.

Finally, she is working with a local rehabilitation hospital to evaluate the efficacy of the current rehabilitation strategy for post-stroke patients.

"The goal is to design an efficient rehabilitation strategy to improve the condition of disabled persons following a stroke," Gu says. "It is exciting to advance knowledge through research, and it is just as rewarding to figure out how to communicate that knowledge broadly."