Manjul Bhargava, winner of the 2014 Fields Medal, has developed new methods in the geometry of numbers 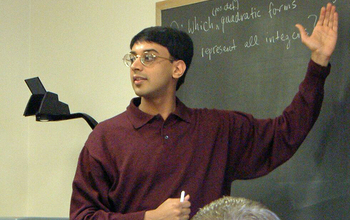 Manjul Bhargava, winner of the 2014 Fields Medal, lectures at the Clay Mathematics Institute.

Editor's Note: This Behind the Scenes article was first provided to LiveScience in partnership with the National Science Foundation (NSF). It describes the work of Manjul Bhargava, who this week won the Fields Medal for his work in the geometry of numbers. The Fields Medal often is called the Nobel Prize of mathematics.

Manjul Bhargava, who has loved mathematics for as long as he can remember, created and solved his first algebra problem at age seven, stacking oranges into a triangular pyramid and trying to figure out how many he would need if he had n oranges on one side. "I still remember the answer," he says. "It's n (n + 1) (n + 2)/6."

While his solution might well mystify many of us, it nevertheless was an easy and auspicious start for Bhargava, an NSF-funded scientist and math whiz who, 10 years ago at age 28, became the second youngest full professor in the history of Princeton University, and who has solved math problems that have stymied some of the best mathematicians in the world.

He figured out, for example, the answer to a problem that had eluded the legendary Carl Friedrich Gauss (1777-1855), a German regarded as one of the greatest mathematicians of all time. In addition, Bhargava and one of his students have made progress on another problem, one of the seven "Millennium Problems" of the Clay Mathematics Institute, a privately funded organization that will provide $7 million for the solutions, or $1 million for each.

Bhargava, who specializes in number theory--which involves understanding whole numbers and how they relate to one another--thinks of his craft as art, rather than science.

At the same time, he acknowledges that "mathematics plays a very important role in our society," and notes that often the applications surprise the very scientists who work on it.

"When mathematicians started working with prime numbers, they never imagined that primes could have any application in the real world, but they now have become of central importance, especially in cryptography--the science of encryption," he says. "Every time we give our credit card number over the Internet, we want it to be secure. The encryption schemes that ensure this all use prime numbers."

NSF has been funding Bhargava's work through its Division of Mathematical Sciences with about $100,000 a year for three years. He recently completed the final year of the grant.

He approaches equations looking for whole number solutions, and patterns in those solutions.

"It's about understanding sequences of numbers, such as square numbers, or prime numbers," he says. "Sequences are fundamental to many areas of mathematics. If you can understand them and how they are distributed, it leads to the solution of many other questions."

The Clay problem he and his student have worked on recently is called the Birch and Swinnerton-Dyer conjecture, a question essentially about advanced calculus but with number theory implications, that involves understanding elliptic curves, or equations of the form y2 = x3+ax+b.

"When you graph this equation, you get a curve," he says.

"Here, a and b are two whole numbers that are fixed, so you are trying to find solutions for x and y, and we're looking for solutions in which x and y are whole numbers," he continues. "We are also interested in rational numbers, which are ratios of whole numbers. The question is, given such an equation, are there just a handful of solutions in rational numbers, or are there infinitely many? There is no algorithm known to decide whether such an equation has finitely many or infinitely many solutions. The Birch and Swinnerton-Dyer conjecture, if known, would give such an algorithm."

Earlier, when he was a graduate student, Bhargava also figured out what the famous Gauss did not.

"Gauss discovered a tricky way of taking two of these forms and using them to make a third one--this is now known as Gauss Composition," Bhargava says. "It has all sorts of amazing properties. The question I addressed in my Ph.D. thesis was: Is this something that works only for quadratic forms? Or were there analogues of this composition for other, higher-degree forms?"

Bhargava, who was born in Canada, grew up on Long Island and graduated from Harvard University, where he majored in math, also is an accomplished musician who plays the tabla, an Indian percussion instrument. For a time, he thought he might become a musician, but math prevailed. "I figured if I became a professional musician, I wouldn't have time to do math, but if I became a professional mathematician in academia, I could still make time for music," he says.

His father was a chemist and his mother, who raised him, is a professor of mathematics at Hofstra University. Bhargava's family believed strongly in the value of a regular public school education, and did not encourage him to skip grades.

He did, however, skip school--occasionally for months at a time. He took off half of third grade, seventh grade, twelfth grade and sophomore year in college, to visit his grandparents in Jaipur, India. While in India, he studied the tabla and learned Sanskrit from his grandfather. Also, rather than go to his own school, he attended his mother's college-level math classes whenever he could get away with it.

"I didn't go to school very often," he says. "Lots of times, I would get up and ask my mother if I could just go and sit in on her classes instead of going to school, and she let me," he says. "She was pretty cool about it."