Changing the shape and function of liquid metal 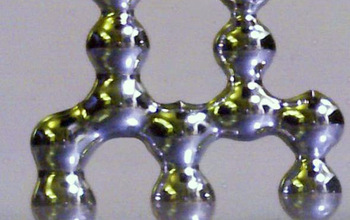 These liquid metal droplets are similar to water but can be shaped into structures.

Gallium is one of the few metals that turns into a liquid at room temperature. When that happens, its surface oxidizes, forming a "skin" over the fluid, almost like a water balloon or a water bed. Years ago, scientists often thought the coating a nuisance. Today they consider it an opportunity.

"We are trying to flip conventional wisdom on its head," says Michael Dickey, associate professor of chemical and bio-molecular engineering at North Carolina State University. "We are taking an old material and using it in a new way."

The National Science Foundation (NSF)-funded scientist is exploring ways to manipulate and modify this liquid metal in order to mold it into functional structures, in electronics, for example, that result in soft, flexible and stretchable and reconfigurable components, such as antennas.

One potential application could be to find a way to put the liquid gallium (actually an alloy of gallium and indium, the latter keeps the gallium from freezing) into already stretchable material in order to provide conductivity.

"If you put aluminum into a rubber band, it will behave mechanically like aluminum," Dickey explains. "But if you put liquid metal into a rubber band, you have the metal conductivity, which you want, but you still have the properties of the rubber band. We are taking advantage of the fact that this metal forms this oxide layer in order to control its shape."

By better understanding the mechanical properties of the liquid gallium, including learning whether it is possible to modify the "skin" itself--by making it stronger or even weaker, for example--it might be possible to design electronic components that can be "adjustable," that is, that can alter their functions as needed, he says.

"If you can change the shape, you can change the function," he says, adding that new types of antennas with this kind of flexibility could transform smartphones, navigation systems and Wi-Fi. "We could develop potentially better antennas for cell phones that can respond to changing conditions."

Other applications could include wearable items, such as watches or medical devices, or in the field of soft robotics. "Most robots that work in factories are made out of stiff materials and aren't good interfacing with humans," he says. "Taken to the extreme, imagine an octopus with large freedom of motion that could perform delicate tasks."

In medicine, "we could see embedded electronics in gloves that a doctor or lab technician might wear, such as feedback sensors or prosthetics, and the doctor wouldn't even know that they were there," he adds.

Dickey is conducting his research under an NSF Faculty Early Career Development (CAREER) award, which he received in 2010. The award supports junior faculty who exemplify the role of teacher-scholars through outstanding research, excellent education and the integration of education and research within the context of the mission of their organization.

"We're trying to understand what is happening at the surface of the metal," he says. "I look at this metal as being like a composite material. It's a metal that forms this oxide on its surface, and the combination is interesting to me."

He and his team are trying to characterize the mechanical properties of the liquid metal, and "how to harness them," he says. "Also, we've been doing some chemical characterization in order to understand what is actually on the surface, and how we can modify it. And we are trying to reconfigure the shape of the metal."

His team is studying the way the metal flows in response to pressure.

"In a sense, the metal behaves like ketchup," he says. "It only flows when the skin breaks, due to application of a critical pressure."

The team harnessed this property to print the metal into freestanding 3D shapes despite the metal being a liquid.

As part of the grant's educational component, the research will be integrated into a new course at NC State for both undergraduate and graduate engineering students. Also, the researchers developed an interactive module that discusses the work within the context of popular movies designed to attract middle school minority children to higher education and careers in science. Among other things, they participate in a summer camp for about 200 middle school youngsters, "where we talk about the research, liquid metal and different fluids."

In preparing for this presentation, in fact, Dickey spoke at length to Gene Warren Jr., who created the special effects for Terminator 2: Judgment Day, in which "the bad guy turns into liquid metal, and then reassembles," Dickey says. "He said that they used liquid metal to do it. We show the kids a clip from the movie and they really get a kick out of it."