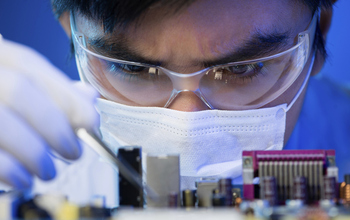 With the approach of Labor Day weekend, we got together with NSF's Nimmi Kannankutty to ask her about the diversity of people and occupations making up the STEM workforce. Kannankutty is senior advisor for NSF's National Center for Science and Engineering Statistics (NCSES).

You can listen to this interview on Science360 Radio.

When we talk about the STEM labor force, what kind of jobs are we talking about?

The acronym "STEM" stands for science, technology, engineering and mathematics. There are also other similar acronyms like "STEMM", which is STEM plus medical fields, or "STEAM", which is STEM plus the arts. The short answer is that there are many different ways that policymakers and researchers define the STEM workforce.

But let's focus on jobs, which is the most common way we think about the workforce.

There is a narrow definition that would include those research and practitioner jobs that we typically think about. Those include computer and math scientists, biological and agricultural scientists, physical scientists, social scientists and engineers. We can think of these jobs as being a central circle of science and engineering (or S&E) jobs.

A slightly bigger circle could include jobs where S&E training may be required, or where workers do engage in work activities that apply S&E knowledge. This would include science and math teachers, technicians and technologists, health occupations including doctors, and managers of the S&E enterprise. So this second circle would include these S&E related jobs.

How many people are there in the STEM workforce?

Another way to consider it is whether they need S&E expertise for their jobs. Among college graduates, for over 16 million, their job requires S&E expertise, and this includes people working in non-S&E jobs.

We also know about the relatedness of an individual's highest S&E degree to their job. There are over 5 million people with a highest degree in S&E who work in non-S&E jobs, but tell us their degree is related to their job.

So, what you can see is there are different ways of thinking about this workforce, each of which tells us about the many career pathways that someone can take.

One interesting thing to note: there are about 750,000 people working in that central circle of S&E jobs that do not have any kind of S&E or related degrees. So S&E jobs are also an endpoint for people with other backgrounds. This demonstrates a key mechanism in how science works: Scientists and engineers apply their knowledge in many non-S&E jobs, but S&E jobs also draw in expertise from other areas to improve the S&E enterprise.

Students are making decisions right now about their majors and maybe their graduate studies. Are the STEM fields good ones for students to pursue?

There are many different pathways you can take with an S&E degree. For example, if you get an engineering degree, you may work as an engineer, as a science or math teacher, or you may be a manager of engineering projects at a consulting firm. S&E graduates continue to higher degrees within S&E, but they also go on to get graduate degrees in medicine, law or business.

An S&E degree does often lead to an S&E job, but it can also be used to pursue a career in other areas.

It takes time to earn a degree, so it's important to understand that the labor market of today can be very different when you graduate. Students should be aware that the opportunities arising from their degrees are not just within their disciplines, but may be in other areas as well.

Why is there controversy about whether we need more people prepared in STEM?

This topic is one that appears often in the press and there are different viewpoints about this.

One viewpoint focuses on examples such as the difference between the number of S&E degree holders and those in S&E jobs, or other measures that might be considered indicators of weak demand in the labor market. But there are counter arguments also. Many of these are focused on concerns about the future. Will there be enough people with the STEM skills (not degrees) needed for the jobs of the future? Will those individuals have a high enough level of expertise? Will we continue to attract talented individuals from other countries?

Is it true that jobs are sitting empty for lack of qualified STEM workers?

We have relatively less information on the demand side of the equation. For example, we don't have comprehensive measures of the skills, competencies or positions that employers need now, or in the future. We also do not have large nationally representative surveys that would help us say more empirically whether companies are not able to find the right people to fill STEM jobs.

What kind of jobs do mathematics majors go into?

This is a really good question, because it illustrates the many pathways that a science degree holder can pursue.

Meanwhile, over 40 percent work in non-S&E jobs. Some 20 percent are in some type of non-S&E managerial position. This could be as a CEO/CFO, an education administrator, or those involved in finance-related jobs. There are about 7 percent who work in sales and marketing jobs--this would include those providing insurance, securities or business services, or in marketing.

The U.S. is known for fostering a knowledge and innovation economy. What these numbers tell us is that people with S&E backgrounds work in many places in that economy. While we have just talked about mathematics majors, we would find that the pathways for other S&E degree holders are just as varied, although in different types of jobs and the proportions will vary.

This also points to another important factor about the workforce: the labor market for a math major is different from that for a biology major or an engineering major. When we look at the big picture, we lose some of the important details that define pathways for individual majors.

Are there good jobs for people prepared in STEM? Can they make good salaries?

The data that we have on salaries shows that people with an S&E or related degree earn more than those without such degrees ($65,000 vs. $56,000). In addition, college graduates working in S&E occupations have a median salary of $65,000, those in S&E-related occupations earn $68,000, and those in non-S&E occupations earn about $50,000. The premium in earnings by S&E or S&E-related degree holders exists at most career stages.Whether your highest degree is in S&E or not, if you work in an S&E occupation, you will likely earn more than those in a non-S&E occupation. As is the case among all degree holders, wages are generally higher as you increase your level of education.

How is the training that scientists and engineers receive attractive to organizations outside academe?

Among S&E doctorates, only about 40 percent work in academia. More broadly, about 70 percent of S&E degree holders work in the business/industry sector; another 13 percent work in a government setting. So, clearly the labor market values these people. By virtue of their degrees, we know that they have skills related to their disciplines--we can think of these as subject matter knowledge, and the related technical expertise.

On the NCSES workforce surveys, we have in the past asked about the preparation that recent doctoral graduates had for certain types of skills. These include problem-solving skills, verbal and written communication, collaboration and teamwork, quantitative skills,networking skills, and management skills.

We had begun some research into these other areas to improve measurement of these skills and competencies.

I heard someone recently say, "What can my son do with a physics degree?" Is there reason to think he'll not get a job?

During the most recent economic downturn that began at the end of the 2007, we found that long-term unemployment is also less among those in S&E occupations relative to the broader labor force.

Another measure we can look at is those who are employed part-time, but would like to work full-time or those who have stopped looking for work. This phenomenon is much more prevalent within the broader labor force, than among those in S&E jobs.

This doesn't answer the question of whether the physics degree holder will get a job, but it does show that they are less likely to be unemployed or underemployed relative to people in other types of jobs.

Is it harder for women to get jobs in STEM?

Women continue to remain underrepresented among those earning S&E degrees, as well as among those working in S&E occupations. While the share of women earning college degrees has risen to over 50 percent, men still earn the majority of S&E degrees.

This varies quite a bit by discipline: over 60 percent of psychology degrees are awarded to women. Lower rates are found in the biological sciences, the social sciences and the physical sciences. The lowest rates are in the computer sciences and engineering, where the shares are below 30 percent.

I do want to say that these shares are higher than they were 20 years ago, so some progress has been made.

Women also tend to participate at lower rates in S&E occupations relative to men. However, this varies across occupations.For example, there are much higher rates of participation of women as psychologists (about 70 percent) than among math and computer scientists (25 percent) or engineers (13 percent).

Demographic changes in the workforce are also at play here. Because older scientists and engineers are disproportionately male, women are a lower percentage of the overall S&E workforce than among recent graduates, where there are a higher proportion of women.

What about people from underrepresented groups?

In the workforce, their participation is also relatively low. About 10 percent of people in S&E occupations are Hispanic, Black or American Indian or Alaska Native, while they make up 26 percent of the U.S. population over the age of 21. Nineteen percent of S&E jobs are held by Asians, whose representation in the U.S. population is 5 percent.

A lot of people from foreign countries get science degrees in the U.S. Are they more highly represented in STEM careers than are Americans?

Many developed countries, including the U.S., benefit from the global marketplace for talent. U.S. universities and their strong training programs have long been a desirable place for foreign graduates to obtain additional training.

There are lots of interesting things about immigrant scientists and engineers in the U.S. Our most recent data shows there are 4.3 million foreign-born individuals with an S&E degree, or an S&E occupation in the U.S. So, they represent about 16 percent of all S&E degree holders or those in S&E jobs.

While 2.3 million did earn their bachelor's degrees abroad and then came the U.S., about 2.0 million of them began their postsecondary education here. Among this latter group, many came here as children, so their primary and secondary education was also in the U.S.

The vast majority of foreign-born scientists and engineers are U.S. citizens or permanent residents.

Tell us about your undergraduate education and the path you took to a career in science.

Well my dad was an engineer, so, not surprisingly, I was open to that as a degree field, and I did study civil engineering for my undergraduate degree.

And he encouraged me to look at other types of programs, and I ultimately decided to go into a science policy program. So that's what I did. I got a doctorate in science policy and I was lucky enough to finish my Ph.D. and come here directly to NSF, and I've worked here for 18 years. For many years I worked on the NSF science and engineering workforce surveys--the source of much of the data that we just finished talking about. I currently work with the statistical and research communities on a broad range of projects on the science and engineering enterprise.