Science by, of and for the people 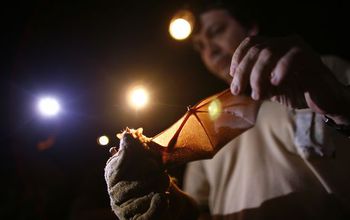 A citizen scientist identifying a species of captured bat.

William Burgos fell in love with the cangrejos quickly.

Soon he was no longer William Burgos, a Puerto Rican citizen asking the country's Conservation Trust for a permit to build bike trails on the nonprofit's land.

Only 8 percent of Puerto Rico's land is conserved; the Trust's mission is to conserve 33 percent by 2023. They cannot achieve this goal working in isolation, says Lee Ann Rodriguez, development manager for the Trust.

"Every person has a place within our organization."

That includes a cadre of volunteers nurtured since 2007, when the Trust received its first NSF funding for citizen science projects. More than 2,000 people participated during the life of that two-year grant, some over and over again. It made Rodriguez and others wonder: How can we capture and reproduce that passion? Basically, how can we replicate William Burgos?

"They ask me, 'Do you think that you can do this?'" he says. "And I always said yes. I was always ready to learn."

The current round of citizen science projects stem from a 2012 NSF grant. All are focused on the Rio Grande de Manatí, a river that twists around the north central part of Puerto Rico. The Trust has a nature reserve in the watershed, Hacienda La Esperanza, covering more than 2,100 acres along the northwestern Atlantic coast. As urban sprawl blossomed around Manatí, the Trust became worried about impacts on land and water.

Manatí residents had similar concerns. The communities along the watershed--largely rural and with a high level of unemployment and low levels of education--were familiar with the rhythms of nature. But they did not understand why these new changes, these effects of urbanization, were taking place, Rodriguez says.

The ecological projects take a faceted approach to research: Citizens build on their personal experiences by learning about scientific methods and their world. Professional scientists gain data and insights--often from their volunteers--in their field. All the while, the Trust evaluates how the skills, knowledge and behavior of participants changes.

"What's really cutting-edge about this project is they are looking at citizen science in terms of a participation ladder," said Ellen McCallie, a program director in NSF's Division of Research on Learning in Formal and Informal Settings. The project structure supports citizens as they climb higher on the ladder--starting as people with a casual interest in science--to the top, where citizens are dedicated scientific leaders.

The group is working to both collect solid scientific data and "increase public engagement in all aspects of science," McCallie said.

Projects include monitoring insect populations, comparing bat colonies in a shopping mall and a natural cave, and exploring the cultural and historical use of natural resources through an archaeological dig.

"Most of the scientists learned very early on that a lot of their participants, even though they're not formally trained in science, knew a lot," Rodriguez says. "A researcher would say the scientific name of a local plant, for example, and a citizen would pipe up with 'Oh yeah! My grandmother would use it whenever I had a stomach ache.'"

Maritza Barreto-Orta, a professor at University of Puerto Rico-Río Piedras, saw this in her coastal and river system management project. One of her volunteers suggested additional tools for measuring beach width. Another identified a case of community adaptation--local communities coping with coastal rise--all on his own.

Barreto says working with the Trust has made her a better science communicator and, most importantly, forged a stronger link with the communities in which she works.

Her volunteers--beachgoers one and all--begin to see the coast through new eyes.

"They start to use these tools to learn and understand their communities, and how they can work to improve their life," she says.

Learning about beach geology, for example, means her volunteers recognize--and steer away from--fragile sea turtle nesting habitats. And they have become passionate about the research. After a recent storm, as Barreto was furiously trying to schedule time to take new coastal measurements, she got a call from one of her volunteers.

He was already at the beach, collecting samples, taking measurements and following all the protocols.

"I get to see my science in practice," Barreto says.

Lessons learned from the initial NSF grant have also sparked other projects within the Trust, some completely run by citizen scientists. In 2013, Rodriguez was named a White House Champion of Change for her "extraordinary" work to help transform the Manatí community.

Thanks to all this success, the organization as a whole is "moving towards volunteerism," says Yogani Govender, the Trust's scientific coordinator. "It's evolved into something much bigger than we expected."

"I see a lot of people that are not biologists or scientists that become very involved after they participated one time," Burgos says.

Burgos himself is a shining example. His initial foray into cangrejo research spurred him to buy a microscope and camera, to better study the crabs and their larvae. He turned this into a photography book and a scientific guide on how to identify the different crabs along Hacienda la Esperanza--the first book of its kind.

The more he learns, the more he can share with his neighbors, visiting scientists and his own family. Burgos's wife, initially furious about missing her novelas to tag crabs at night, is now another avid volunteer, who brings big pots of arroz y habichuelas--rice and beans--to feed her fellow scientists, hungry after a night of fieldwork.

Burgos says it best: "Anyone can become a citizen scientist."