Community college project gets students on the STEM path

Undergraduates get involved in research activities as part of teaching mission 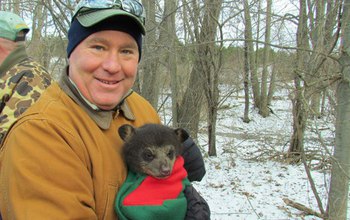 One day in 2001, a colleague from the conservation program at Finger Lakes Community College stopped biology professor James Hewlett in the hall with a question: "Do you know whether you can tell the sex of a red tailed hawk from a blood sample?"

Hewlett didn't know, but decided to put several of his students on it.

It was an opportunity to conduct research that his students, and indeed most community college students at the time, rarely if ever had.

"I could see what it was doing to the students," Hewlett says. "It was transforming their learning experience. I said to myself: 'we need to expand on this."'

The result, initially, was a pilot project that incorporated scientific research into the undergraduate program at Finger Lakes, located in Canandaigua, N.Y. In recent years, however, it has morphed into a nationwide network of community college programs supported by the National Science Foundation (NSF) that currently involves 32 schools--soon to be 37--all committed to bringing undergraduate research into their science curricula.

"Community colleges typically do a lot of training for specific jobs, like nursing or auto mechanic technician or music recording technicians, and all of these programs are taught by having students do their craft," Hewlett says. "Yet, until recently, when we got students who said they wanted to become scientists, we didn't treat them the same way as we did other professions, by actually letting them do science. That wasn't fair."

The success of the Finger Lakes initiative, first funded by NSF as a single program in 2005, inspired Hewlett to think bigger. "I was curious to see whether what we have done here could work at other schools," he says. "The program continues here, but our main thrust now is helping other schools design similar programs."

Indeed, it has been transformative for Laurie Raeman, 51, who started college two years ago after a long career as a hair stylist, and who now seeks a career in conservation. She expects to receive her degree in December.

Her research has been part of a black bear management project designed and supervised by Van Niel, which includes determining birth dates of cubs and typical dens used by bears in the Finger Lakes region of New York.

"The bears walk the same path over and over, and you can see obvious bites and scratches on the trees," she says. "They also have a wide stance when they walk these trails, which is a mystery because they do not do it everywhere. They do it in Massachusetts, but not in New York state. It's not their normal walk, but it's something they do over and over. At the beginning of the path, the trees are very chewed, bitten and rubbed and you can see their exaggerated wide walk. Then the ritual trail ends, and the trees are not ripped up, and it's a normal walk."

She and Van Niel will be among other program participants traveling to Washington later this month for a special poster presentation of their research for lawmakers on Capitol Hill. "This research has been very important to me," Raeman says. "It's been really great because we have direct contact with the bears, which makes it all that easier to learn, as well as pretty exciting."

Van Niel describes the field research component of his class as "a highlight for my students and me," adding: "We read journal articles, design protocols, gather data and collaborate with professionals in the field. CCURI provided me with the support I needed for professional development to actually work with bear researchers while developing this course, as well as the purchase of gear such as telemetry equipment and camera traps needed to do our work.

"Since 2010, I have had students present their research at several regional and national conferences and secure seasonal positions working with bears," he adds.

By the way, Hewlett's students did, in fact, solve the original scientific puzzle of the gender of the red tailed hawk. They developed a simple genetic test using a blood sample that isolates a gene on the sex chromosome, and provides the answer.

"They did it outside the classroom, and became totally engaged in the genetics," Hewlett says. "So much so that other instructors were asking me: 'what have you done to these students, they are so into it? There has to be a way to involve other students.' That was the start of it, and we just had to go down that road."