Sleeping sands of the Kalahari awaken after more than 10,000 years 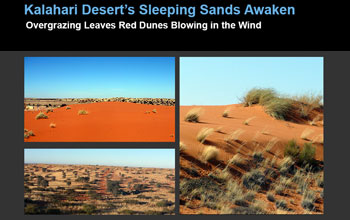 See a photo gallery of the Kalahari Desert's dunes on the move.

The name conjures an arid, almost lifeless expanse, its red, iron oxide sands stretching to the horizon and beyond.

But huge subterranean water reserves lie under the Kalahari, which covers parts of Botswana, Namibia and South Africa. Dragon's Breath Cave, the largest non-subglacial underground lake on Earth, is buried there.

The Kalahari was once a much wetter place, with ancient Lake Makgadikgadi covering today's Makgadikgadi Pan. The lake dried out 10,000 years ago.

Today the Kalahari's wettest areas receive 20 inches of rain each year; its driest, 4 to 8 inches. Grasses green up in the rainy season.

As nomadic as the Kalahari's San Bushmen, D'Odorico and Okin move from place to place, setting up camp in game reserves, local village farms and communal lands to study the desert's dunes.

The sands, last on the move more than 10,000 years ago, have awakened. "The dunes are active again," says D'Odorico, "and it's happened in just the last three to four decades."

The introduction of pumps to ferry water from deep under the Kalahari to its surface has provided sustenance for livestock and fostered increasing herd sizes. The boreholes allow ranchers to use arid areas once grazed only in wet years.

"The shift from traditional pastoralism to borehole-dependent ranching, however, has resulted in the degradation of the Kalahari," says D'Odorico.

Cattle grazing has led to the takeover of grasslands by shrubs and other woody vegetation.

Are we trampling the life out of the Kalahari?

Without grasses to anchor the dunes in place, their sand grains are blowing in the wind.

"Vegetation stabilizes the sediments," says Okin. "Where there's enough plant cover, the wind blows on by." Once the grasses are gone, the sands start moving, their grains carried to new destinations by passing breezes.

"Many dune fields around the world have undergone alternating periods of mobilization and stabilization in response to changes in winds and rainfall," write D'Odorico and Okin in a paper published in the January 2014, issue of the Ecological Society of America journal Ecosphere.

Co-authors of the paper are Abinash Bhattachan of UVA, Kebonyethata Dintwe of UCLA, and Scott Collins of the University of New Mexico.

"In modern times, disturbances associated with land use are believed to be a dominant factor contributing to the activation of stabilized vegetated dunes in drylands," the scientists write.

"The process could lead to an activation of aeolian [wind-borne] transport in the region, with important implications for the biogeochemistry of downwind terrestrial and marine ecosystems."

It's unclear, say D'Odorico and Okin, whether the Kalahari's dunes hang on the edge of a tipping point between their current state--"vegetated fixed linear dunes"--or have moved to what researchers call a degraded state, "barren and active dunes."

Dunes transform from stable to active after plant cover is reduced beyond a critical level.

"It's important to understand whether a landscape is undergoing a transition to degraded conditions," says D'Odorico, "and whether a reduction in land-use intensity might lead to the recovery of vegetation in active dune fields."

For example, in the Negev Desert along the Egypt-Israel border, the Israeli side's dunes are stabilized by vegetation; on the Egyptian side, however, the dunes are moving because overgrazing has left them barren.

Since the border was established in 1982, wood-gathering and grazing have ceased on the Israeli side. Its once-degraded dunes restabilized within two years.

In the Kalahari, dune mobilization is ongoing, especially in overgrazed areas close to boreholes and villages, D'Odorico and Okin have found.

"Understanding thresholds and tipping points is fundamental to predicting the future behavior of Earth's surface under changing environmental conditions," says Paul Cutler, a program director in the National Science Foundation's Division of Earth Sciences, which funds the Kalahari dune research.

"This project aims to improve our understanding of the land-use practices that play a part in potentially far-reaching changes, and to sharpen predictions of atmospheric dust loading from the Southern Hemisphere."

From dust to dust: Kalahari sands reborn in the sea?

Such dust emissions from the Southern Hemisphere have been relatively low, "but reductions in vegetation cover due to land use or climate change may allow new sources like the Kalahari to emerge," says D'Odorico.

Where would all that dust--in this case, from Kalahari sands--end up?

Dust grains from the red dunes may be carried on the wind from Africa as far as the Southern Ocean. Once deposited there, their iron content could be enough to boost the productivity of marine phytoplankton, feeding new blooms of these microscopic algae and altering ocean ecosystems.

From dust to dust--or dune to plankton.