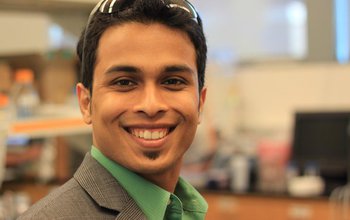 When Sunny Shah and his research colleagues at the University of Notre Dame developed a new diagnostic tool for detecting the presence of bacteria, viruses and other pathogens, they assumed that the food industry would be the perfect market.

It made sense, particularly amid ongoing concerns over food safety. The test could identify, among other things, E. coli 0157, which has caused a number of deadly outbreaks in the United States, as well as the bacterium responsible for brucellosis, a disease caused by eating undercooked meat or unpasteurized dairy products.

Their test was accurate and inexpensive. It just wasn't fast enough.

"Even though we could provide a cheaper test than what is already available, they said they would be willing to pay more for a faster test," Shah says, referring to his conversations with representatives from food processing plants, health agencies and food testing labs. "They said we needed to produce results within two hours, not two days, because they wouldn't be able to ship anything out, and had to pay for refrigeration, while waiting for test results."

So the National Science Foundation (NSF)-funded scientist switched his focus--he likes to call it a "pivot"--from food safety to medical applications. In addition to food-borne bacteria, the test also can recognize the virus that causes Dengue fever, potentially valuable for surveillance activities both here and abroad, and human papillomavirus (HPV), which is linked to cervical and oral cancers.

Shah, who also is assistant director for the ESTEEM graduate program, which exposes those with STEM (science, technology, engineering, and mathematics) backgrounds to business and entrepreneurial courses, received $50,000 in 2013 from NSF's Innovation Corps (I-Corps) program. I-Corps helps scientists assess how, and whether, they can translate their promising discoveries into viable commercial products.

The award supports a set of activities and programs that prepare scientists and engineers to extend their focus beyond the laboratory into the commercial world, with the idea of providing near-term benefits for the economy and society.

Although things did not turn out as originally planned in this case, Shah's experience nevertheless actually embodies the I-Corps philosophy, since one of its major goals is to mentor scientists in ways that allow them to evaluate the commercial potential of their discoveries, and send them in different directions if necessary to ensure their research ends up in the best possible place to do the most good at an affordable price.

"It doesn't matter what we, as researchers, think is the value of our technology," Shah says. "It's what the customer thinks that is important and the only way to identify this customer need is by getting out and interviewing them."

NSF also earlier supported the research that developed the test in 2011. Shah's research colleagues on this project include Hsueh-Chia Chang, professor of chemical and biomolecular engineering, Satyajyoti Senapati, research assistant professor, and Zdenek Slouka, postdoctoral associate in the Chang group. For the I-Corps grant, Kerry Wilson, managing director of Springboard Engineers, played the role of the business mentor, while Shah was the entrepreneurial lead

The test uses a biochip that can detect the DNA or RNA of a particular pathogen.

"Every pathogen has a unique biomarker, and what we do is put a probe on our biochip that captures that biomarker," Shah says. "If the sample has that particular pathogen, then its biomarker will bind to this probe and give us a signal. There are changes in the electrical properties, so it gives us a visual electrical signal that can easily be translated into a target present/absent signal."

Each chip is programmed for a specific pathogen, "but in the future we hope to develop what we call a multiplex biochip that can detect numerous pathogens all on the same device," Shah adds.

The plan now is to develop the tool for future use by dentists to test their patients during office visits for early detection of HPV-related oral cancer before there are visible signs of disease.

"Usually dentists now just examine you visually for lesions, but this would be a sample swab that could give you advance warning," he says.

The test also might be useful as a diagnostic tool for food-borne disease after infection, that is, in testing an already ill patient's blood, he says.

The team recently received a National Institutes of Health grant to study a possible future surveillance role for the test in screening mosquitoes for the presence of Dengue Fever.

"This is not a huge problem for the United States, although there have been a number of cases in parts of Florida in recent years, but it is an issue in South America, Brazil and India, and other areas, " he says.

The impact of I-Corps allowed Shah to make the transition. "Knowing the market and the customer early is extremely important in the technology commercialization process," he says. The program helped him to "quickly assess a particular market to identify customer need and be ready to pivot from one market to another, if needed."