In a cramped city, growing a garden is a luxury. For some Boston teens, two square feet of space is all they need to grow up to 40 plants--without any soil. Boston College, with funding from NSF, is teaching teens the power of hydroponics 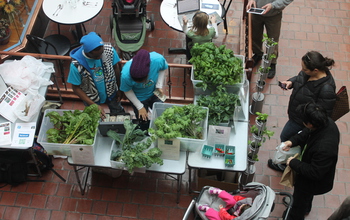 When Boston College Professor Mike Barnett first got students involved in hydroponics, he couldn't get them to go home.

"We charged them with the task of building a hydroponic system to grow 50 plants that would fit in a closet, and they wouldn't leave the lab." Barnett said. "At that point, we knew we were on to something."

Hydroponics is the process of growing food with nutrient-rich water instead of soil and is the basis for a project that high school students have been working on at Boston College since 2012.

Boston College's Urban Hydrofarmers project is part of its College Bound program, which prepares high school students for college by teaching them valuable skills in business and science.

With funding from the National Science Foundation (NSF) and in partnership with the STEM Garden Institute, Boston College chose to pursue hydroponics with teenagers because it involves all the basic disciplines students learn in high school.

The goal of the project is to motivate students to pursue science in higher education, according to NSF Program Director David Campbell.

"It addresses the ultimate goals of NSF by engaging young people in science and preparing the next generation of the scientific workforce," Campbell said.

About 60 high school students come to learn at Boston College's greenhouse every year. The program targets teens with average grades, Barnett said, and many of the students come from immigrant families. Some of these students would not reach college without the aid and skills the program provides, according to Campbell.

Students are a part of the growing process from start to finish, from designing the hydroponic systems to selling the produce they grew.

The greenhouse is 1200 square feet of growing space, Barnett said and can produce about 1,000 plants every two weeks. The produce is then sold at a farmers market.

Students run a stand at local farmers markets almost every Saturday, and have to step up to answer questions from customers who are skeptical about hydroponics, Barnett said.

For Stonehill College student Lori Phillips, these questions were both her favorite and most challenging experiences while in the program.

"The very first time the Hydroponics team went to sell at a farmers market, it was a hot, slow day, and we couldn't get any one to stop and hear us out," Phillips said. "I swallowed my fear and spoke out to an older woman about College Bound and the Hydroponic team's goal."

When the woman she spoke to that first day asked for Barnett's contact information to tell him how impressed she was, Phillips became more confident in her public speaking and now enjoys speaking up.

Students not only gain experience in public speaking by running the stand, but also business planning, according to Barnett.

The program lets the students decide how to spend the money made from the farmers markets. They learn how to run a business, according to Barnett, because they come to understand that they have to save up and invest in materials.

This business savvy, coupled with science learning, gives students a foot in the door in the green energy industry, Barnett said.

By combining green energy and hydroponics, students are taking part in an emerging market for locally grown produce.

Green energy, such as wind and solar, can heat greenhouses during off-seasons, so produce can be grown anywhere year-round, according to Barnett.

Barnett cited the increasing number of farmers markets and the farm-to-table movement as evidence of hydroponics' bright future.

"Now you can grow the produce for the same price as it's being shipped from California, but the difference it is it ends up being healthier, tasting better and being more nutritious," Barnett said. "It's not been picked and shipped for 3,000 miles. It's local."

With hydroponics, the space constraint and soil contamination found in urban areas is no longer a deterrent for growing local. According to Barnett, a person can grow 40 plants within a space of two square feet.

The project has given some young people the idea of starting hydroponics businesses of their own to bring local produce to their neighborhoods, according to Barnett.

For Phillips, the project has inspired her to get other students involved in hydroponics and even start a major for it at her college.

"I think that we've got the kids right at the cusp of what could be a really nice place for them to be," Barnett said, "in terms of capitalizing on an emerging market."