Tracing the evolution of forest trees 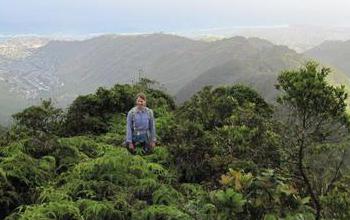 Elizabeth Stacy in a stand of stunted Metrosideros at higher elevation on a Ko'olau leeward ridge.

There are at least 60,000 identified tree species in the world, "but we know next to nothing about how they got here," Elizabeth Stacy says. "Trees form the backbone of our forests, and are ecologically and economically important, yet we don't know much about how speciation happens in trees."

Speciation, the evolutionary process by which new biological species arise, fascinates Stacy, an associate professor of biology at the University of Hawaii Hilo, and forms the core of her research. The National Science Foundation (NSF)-funded scientist is focusing on the origins of the many forms of Metrosideros, a diverse genus of forest trees, and on one of its species in particular--Hawaii's M. polymorpha--as a model for studying diversification.

The Hawaiian Islands were formed and continue to be formed from volcanic activity, which makes them an ideal place to study speciation. Because the islands are so isolated, their plant and animal species almost certainly colonized for the first time millions of years ago when wind, ocean currents, birds and insects carried early specimens there.

"Hawaii is a fantastic place to study evolution and the origins of species," Stacy says. "It's like its own planet, its own evolutionary experiment."

Metrosideros comprises trees and shrubs found predominantly in the Pacific Rim region. The name means "iron heartwood," and derives from the ancient Greek metra, or "heartwood," and sideron, or "iron." Stacy is trying to discern the relationships among the many forms of this genus in Hawaii and learn how reproductive barriers arise between diverging populations.

"Over time, Metrosideros has diversified into five species," she says. "M. polymorpha is by far the most abundant. It's unusual for its huge ecological breadth. You can find it in almost every habitat in Hawaii. It's everywhere."

Insights into the evolution of such long-lived trees as these could have important implications for future conservation practices in Hawaii, and possibly elsewhere.

"Because it is so abundant and dominant, Metrosideros is a keystone species for many of Hawaii's terrestrial environments," Stacy says. "It is an important resource for native birds and insects. Insights into how the many forms of Metrosideros originated and how different they are from each other today can reveal insights into the same for the many animals that use Metrosideros. Understanding the ecological needs of species is an essential first step in their conservation.

"Conservation biology has gained an appreciation for evolution," she adds. "Over the last decade, people have grown to appreciate that we need to pay attention to the processes that give rise to species. Speciation is literally the origin of the biodiversity that we are concerned about saving. To really think about long-term conservation, we need to be aware of these evolutionary processes."

Stacy is conducting her research under an NSF Faculty Early Career Development (CAREER) award, which she received in 2010. The award supports junior faculty who exemplify the role of teacher-scholars through outstanding research, excellent education and the integration of education and research within the context of the mission of their organization. NSF is funding her work with about $750,000 over five years.

Her project uses molecular genetic methods to "try to unravel the very shrouded evolutionary history of Metrosideros in Hawaii," she says. "We're experimenting with novel molecular markers--previously inaccessible genes and gene regions--to get a clearer picture of how the forms of Metrosideros are related, both within and across islands."

Uncovering the evolutionary relationships among closely related trees is especially difficult because of their tendency to hybridize, and thus share the same genetic material, she adds.

Also, she and her team are conducting experiments in the field and in the greenhouse with seedlings of various forms, exposing them to different stresses to compare their differences.

"These experiments are revealing insights into how long-term exposure of tree populations to Hawaii's famous environmental gradients can lead to diversification, and they reveal which specific environmental factors, for example, water, light and wind are most important for causing the differences among the forms of the tree," she says.

"Lastly, we are looking at their reproductive barriers: can you two make 'babies' with each other, and how fit are your 'babies?"' she adds. "How well do your offspring survive, and reproduce compared to everyone else in your population? We do a lot of hand-crossing, or hand pollination, where you take pollen from one tree and pollinate another."

These crosses allow examination of the both prezygotic (before fertilization) and postzygotic (after fertilization) barriers that accumulate between diverging populations on the way to speciation.

"I posit that adaptation of this widespread tree to Hawaii's highly varied environments has led to the evolution of partial reproductive isolating barriers between forms that are adapted to different habitats," she says.

As part of the grant's educational component, she is encouraging her students to participate in research through field and lab projects. The team also has established Ho'oulu Lehua, a community-based organization that provides hands-on environmental education for youth with projects that address real conservation issues in the native forests of East Hawaii Island.

The goal of Ho'oulu Lehua, under the leadership of CAREER technician Jennifer Johansen, is to strengthen connections between Hawaii's young people and native forests through restoration activities based on scientific understanding and cultural traditions.

"This island has 11 of 13 climate zones," she says. "We have desert, and wet forests and bogs. Because we are in this amazing evolutionary laboratory, I think we excel in engaging our students with authentic research experiences outside. You can't do this stuff in a lab."