A day in the life of Robotina

What might daily life be like for a research robot that's training to work closely with humans? 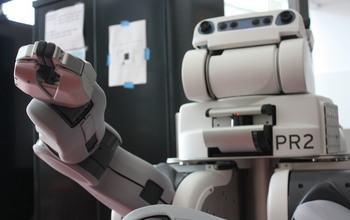 On the day of the Lego experiment, I roll out of my room early. I scan the lab with my laser, which sits a foot off the floor, and see a landscape of points and planes. My first scan turns up four dense dots, which I deduce to be a table's legs...

Robotina is a sophisticated research robot. Specifically, it's a Willow Garage PR2, designed to work with people.

But around the MIT Computer Science and Artificial Intelligence Laboratory, it is most-often called Robotina.

"We chose a name for every robot in our lab. It's more personal that way," said graduate student Claudia Pérez D'Arpino, who grew up watching the futuristic cartoon The Jetsons. In the Spanish-language version, Rosie, the much-loved household robot, is called Robotina.

Robotina has been in the interactive robotics lab of engineering professor Julie Shah since 2011, where it is one of three main robot platforms Shah's team works with. Robotina is aptly named, as an aim is to give it many of Rosie's capabilities: to interact with humans and perform many types of work.

In her National Science Foundation (NSF)-supported research, Shah and her team study how humans and robots can work together more efficiently. Hers is one of dozens of projects supported by the National Robotics Initiative, a government-wide effort to develop robots that can work alongside humans.

"We focus on how robots can assist people in high-intensity situations, like manufacturing plants, search-and-rescue situations and even space exploration," Shah said.

What Shah and her team are finding in their experiments is that humans often work better and feel more at ease when Robotina is calling the shots--that is, when it's scheduling tasks. In fact, a recent MIT experiment showed that a decision-making robotic helper can make humans significantly more productive.

Part of the reason for this seems to be that people not only trust Robotina's impeccable ability to crunch numbers, they also believe the robot trusts and understands them.

As roboticists develop more sophisticated, human-like robotic assistants, it's easy to anthropomorphize them. Indeed, it's nothing new.

So, what is a day in the life of Robotina like as she struggles to learn social skills?

Give that robot a Coke

I don't just crash into things all the time like some two-year-old human, if that's what you're wondering. My mouth also contains a laser scanner, so I can get a 3-D sense of my surroundings. My eyes are cameras and I can recognize objects...

Robotina has sensors from head to base to help it interact with its environment. With proper programming, its pincher-like hands can do everything from fold towels to fetch Legos (more on that soon).

It could even sip a Coke if it wanted to. Well, not quite. But it could pick up the can without smashing it.

Matthew Gombolay, graduate student and NSF research fellow, once witnessed the act. At the time, he wasn't sure how Robotina would handle the bendable aluminum can.

"I wanted it to pick up a Coke can to see what would happen," Gombolay said. "I thought it'd be really strong and crush the Coke can, but it didn't. It stopped."

That's because Robotina has the ability to gauge how much pressure is just enough to hold or manipulate an object. It can also sense when it is too close to something--or someone--and stop.

Look, I'm 5-feet-and-4.7-inches tall--even taller if I stretch my metal spine--and weigh a lot more than your average human. If I sense something, I stop...

Proximity awareness in robots designed to work around people not only prevents dangerous or awkward robot-human collisions, it builds trust.

Roboticists who aim to integrate robots into human teams are serious about trying to hard-wire robots to follow the spirit of Isaac Asimov's first Law of Robotics: A robot may not injure a human being.

Luckily, when decision-making robots like Robotina move into factories, they don't have to be ballet dancers. They just have to move well enough to do their jobs without hurting anyone. Perhaps as importantly, the people around them must know that the robots won't hurt them.

The day of the Lego experiment is eight hours of fetching Legos and making decisions about how to assemble them. The calculations are easy enough, but all that labor makes my right arm stop working. So I switch to my left...

In an exercise last fall that mimicked a manufacturing scenario, the researchers set up an experiment that required robot-human teams to build models out of Legos.

In one trial, Robotina created a schedule to complete the tasks; in the other, a human made the decisions. The goal was to determine whether having an autonomous robot on the team might improve efficiency.

The researchers found that when Robotina organized the tasks, they took less time--both for scheduling and assembly. The humans trusted the robot to make impartial decisions and do what was best for the team.

I have to decide what task needs doing next to complete the Lego structure. The humans text me when they are done with a task or ready to start a new one. I schedule the tasks based on the data. I don't play favorites. When I'm not fetching Legos or thinking, I sit quietly...

"People thought the robot would be unbiased, while a human would be biased based on skills," Gombolay said. "People generally viewed the robot positively as a good teammate."

As it turned out, workers preferred increased productivity over having more control. When it comes to assembling something, "the humans almost always perform better when Robotina makes all the decisions," Shah said.

I stand across a table from a human. I sort Legos into cups while the human takes things out of the cups. Humans are incredibly unpredictable, but I do my best to analyze where the human is most likely to move next so that I can accommodate him...

Ideally, in the factories of the future, robots will be able to predict human behavior and movement so well they can easily stay out of the way of their human co-workers.

The goal is to have robots that never even have to use their proximity sensors to avoid collisions. They already know where a human is going and can steer clear.

"Suppose you want a robot to help you out but are uncomfortable when the robot moves in an awkward way. You may be afraid to interact with it, which is highly inefficient," Pérez D'Arpino said. "At the end of the day, you want to make humans comfortable."

To help do so, Pérez D'Arpino is developing a model that will help Robotina guess what a human will do next.

In an experiment where it and a student worked together to sort Lego pieces and build models, Robotina was able to guess in only 400 milliseconds where the human would go next based on the person's body position.

The angle of the arm, elbow, wrist... they all help me determine in what direction the hand will go. I am limited only by the rate at which sensors and processors can collect and analyze data, which means I can predict where a person will move in about the average time a human eye blinks...

Once Robotina knew where the person would reach, it reached for a different spot. The result was a more natural, more fluid collaboration.

While Robotina's days now involve seemingly endless cups of Legos, its successes in the MIT lab will eventually enable it to become a more well-rounded robot. The experiments also demonstrate humans' willingness to embrace robots in the right roles.

To make them the superb, cooperative assistants envisioned by the National Robotics Initiative--to give people a better quality of life and benefit society and the economy--could require that some robots be nearly as dynamic and versatile as humans.

"An old-school way of thinking is to make a robot for each task, like the Roomba," Gombolay said. "But unless we make an advanced, general-purpose robot, we won't be able to fully realize their full potential."

To have the ideal Robotina--the Jetsons' Robotina--in our home or workplace means a lot more training days for humans and robots alike. With the help of NSF funding, progress is being made.

What would I say if I could talk? Probably that I'd really like to watch that Transformers movie.