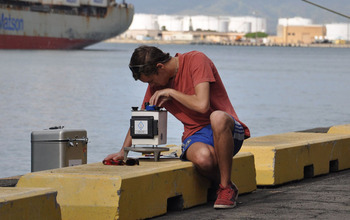 Before leaving port, an undergraduate student acquires important control data with a gravitometer.

Imagine one day you woke up, and the North Pole was suddenly the South Pole.

This geomagnetic reversal would cause your hiking compass to seem impossibly backwards. However, within our planet's history, scientists know that this kind of thing actually has happened...not suddenly and not within human time scales, but the polarity of the planet has in fact reversed, which has caused scientists to wonder not only how it's happened, but why.

This week, as the National Science Foundation (NSF) research vessel R/V Sikuliaq continues its journey towards its home port in University of Alaska Fairbanks' Marine Center in Seward, Alaska, she detours for approximately 35 days as researchers take advantage of her close proximity to the western Pacific Ocean's volcanic sea floors. With the help of three types of magnetometers, they will unlock more of our planet's geomagnetic history that has been captured in our Earth's crust there.

"The geomagnetic field is one of the major physical properties of planet Earth, and it is a very dynamic property that can change from milliseconds to millions of years. It is always, always changing," said the expedition's chief scientist, Masako Tominaga, an NSF-funded marine geophysicist from Michigan State University. "Earth's geomagnetic field is a shield, for example. It protects us from magnetic storms--bursts from the sun--so very pervasive cosmic rays don't harm us. Our research will provide data to understand how changes in the geomagnetic field have occurred over time and give us very important clues to understand the planet Earth as a whole."

Reportedly, the last time, a geomagnetic reversal occurred was 780,000 years ago, known as the Brunhes-Matuyama reversal. Bernard Brunhes and Motonori Matuyama were the geophysicists who identified that reversal in 1906.

Researchers Tominaga, Maurice Tivey (from Woods Hole Oceanographic Institution) and William Sager (from University of Houston) have an interest that goes further back in history to the Jurassic period, 145-200 million years ago when a curious anomaly occurred. Scientists originally thought that during this time period, no geomagnetic reversals had happened at all. However, data--like the kind that Tominaga's team will be collecting--revealed that in fact, the time period was full of reversals that occurred much more quickly.

"We came to the conclusion that it was actually 'flipping flopping,' but so fast that it did not regain the full strength of the geomagnetic field of Earth like today's strength. That's why it was very low," Tominaga explained. "The Jurassic period is distinctive. We think that understanding this part of the geomagnetic field's behavior can provide important clues for computer simulation where researchers have been trying to characterize this flipping and flopping. Our data could help predict future times when we might see these reversals again."

For approximately three decades, researchers like Tominaga have been probing this area of the western Pacific seafloor. With her cruise on R/V Sikuliaq, Tominaga and Tivey come with even more technology in hand.

Thirty years ago, researchers didn't have access to autonomous underwater vehicles (AUV) that could go to deeper, harder-to-reach ocean areas. However, that is just one of three ways Tominaga's team will deploy three magnetometers during its time at sea. One magnetometer will be towed at the seasurface from R/V Sikuliaq. Another will trail behind the ship at mid-water depth, and the third will be part of the AUV at near the seafloor.

With the help of R/V Sikuliaq's ship's crew, Tominaga and Tivey, a cruise archivist who is also a computer engineer/scientist, and seven students (three of whom are undergraduates), the team will run 24 hours a day/seven days a week operations, deploying underway geophysics, the magnetometers, collecting data and then moving on to the next site.

Naturally, the weather can waylay even the best plans. "Our goal is always about the science, but the road likely will be winding," Tominaga said. "The most enjoyable part of this work is to be able to work together with this extremely diverse group of people. The Sikuliaq crew, the folks at UAF and those connected to the ship from NSF have all been committed to seeing this research happen, which is incredibly gratifying.... When we make things happen together as a team, it is really rewarding."

Not surprisingly, this kind of oceanographic research is among some of the most fundamental, serving as a foundation for other research where it might correlate or illuminate. Additionally, because the causes and impacts of these geomagnetic changes are unknown, connections to currents, weather patterns, and other geologic phenomenon can still be explored also.

"NSF, along with the entire science community, has waited years for this unique state-of-the-art Arctic vessel, and the timing couldn't be more critical," said Rose DuFour, NSF program director. "Our hope is to use R/V Sikuliaq to help carry out the abundant arctic-based seagoing science missions that go beyond NSF-funded science and extend to those from other federal agencies, like Office of Naval Research as well."

Tominaga notes that another key part to the cruise's mission is record keeping; it's why an archivist is part of her team. He even will blog daily (with pictures). As foundational research, it's important to "keep every single record intact," and she believes this broadcasting daily narrative will assist in this effort.

"Without going there, getting real data--providing ground truth--how do we know what is going on?" Tominaga said, explaining fieldwork's importance.

Tominaga is quite clear on what prompts her to keep one of the busiest fieldwork schedules, even during a season usually reserved for family and friends, sipping eggnog or champagne. "I was 'raised' as a scientist/marine geophysicist, and I don't just mean academically," she said. "I really looked up to my mentors and friends and how they handed down what they know-so unselfishly. And when I was finishing my Ph.D., I realized that there will be a time I will hand down these things to the next generation. Now, as a professor at Michigan State University, I'm the one who has to pass the torch, if you will--knowledge, experience, and skills at sea. That's what drives me."