Earth Day is on the horizon. But is 'greener' always better? 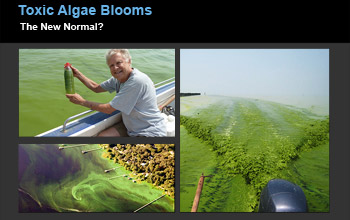 View a photo gallery of algae blooms in lakes.

Going green. On Earth Day and every day, being "greener" is linked with good things like lowering your carbon footprint and eating locally grown foods.

But not when it comes to drinking or swimming in the bright green waters of lakes fouled by algae, says Hans Paerl, an environmental scientist at the University of North Carolina at Chapel Hill.

In freshwater lakes around the world, such algae blooms often result from an overabundance of what's known as cyanobacteria, or blue-green algae.

Cyanobacteria form widespread, very visible blooms that look like blue-green paint or scum floating on the water. They may be toxic to humans and other animals.

These filamentous bacteria clump into mats that cover a lake's surface from one shore to the other, using up oxygen in the water and eventually turning the lake's depths into a dead zone.

From Lake Taihu, China, to Lake Erie in the U.S.

It was June 2007, and water spouting from kitchen faucets in Wuxi, China, was pea-soup green. The water came from Taihu, China's third largest lake.

Cyanobacteria obscured the surface of the 900-square-mile lake and quickly overwhelmed the intake plant for the city of Wuxi's drinking water.

Chinese officials scooped 6,000 tons of algae from Taihu and diverted water from the Yangtze River to flush the lake. However, says Paerl, the bloom persisted. "It was fall when it finally abated."

Two weeks into the bloom, Paerl was in China, leaning over the side of a small boat to take samples of Taihu's scum.

He discovered that the algae is similar to that found in blooms in North Carolina's ponds, rivers and estuaries, and in many larger bodies of water such as Lake Erie, Lake Victoria and the Baltic Sea.

"Nowhere are the blooms worse than on Taihu, however," says Paerl, whose work is funded by an NSF Dimensions of Biodiversity grant. "Habitat for fish, crabs and other aquatic species is becoming endangered."

Ten million people also depend on Taihu for drinking water, fisheries and tourism.

Lake Erie on the border of the U.S. and Canada faces the same challenges.

In 2011, a record-breaking bloom of similar cyanobacteria to the species that plagued Taihu smothered Lake Erie, turning it a bright green that showed up on satellite images.

At the bloom's peak in October, it expanded to more than 1,930 square miles, three times larger than any Lake Erie bloom on record.

The "recipe" for controlling the problem, says Paerl, "has been to reduce phosphorus finding its way into lakes from sources on land like fertilizers. That's based on the long-standing paradigm that phosphorus is the key nutrient limiting freshwater algae blooms."

But another element, nitrogen, flowing into lakes and rivers is increasing more rapidly than phosphorus. "It's led researchers to question whether both nitrogen and phosphorus should be controlled to stem the tide of proliferating algae blooms," says Paerl.

Lake Taihu, he says, is a "looking glass" for addressing such nutrient overenrichment and toxic algae blooms.

"Our NSF Dimensions of Biodiversity project is determining what roles specific nutrients like nitrogen and phosphorus play in the frequency and extent of algae blooms in lakes, and how they affect these ecosystems."

Data from experiments on the relationship between nutrients and algae blooms are being used to formulate a nutrient reduction management strategy. Scientists hope it will lead to the control of blooms in Taihu and other lakes.

The goal, Paerl says, is to find new ways of ensuring sustainable uses of lakes prone to blooms.

"This research shows the importance of taking a holistic approach to understanding harmful cyanobacteria blooms," says Malcomber. "Only with an ecosystems approach can long-term, successful sustainability strategies be formulated."

The complex chain that leads to algae blooms in freshwater begins not in lakes but on land.

Farmers often overfertilize their fields. The excess fertilizer, laden with nutrients like phosphorus and nitrogen, washes into creeks and rivers, where it's eventually carried to lakes.

"Nitrogen is necessary for increasing crop yields," says Paerl, "but plants are inefficient at taking it up. More fertilizer is often added than plants need."

Only a fraction of the nitrogen applied to soils ends up in crops; in some regions, it's less than 20 percent. The rest is on the loose.

When the excess eventually reaches fresh water, it fertilizes aquatic algae such as cyanobacteria--just as it encourages plants on land to grow. The algae proliferate, becoming massive blooms.

As the algae die, they fall to the lake's bottom and are digested by microorganisms. The process removes oxygen from the water, creating low-oxygen "dead zones," fish kills and tainted waters.

Are algae blooms in lakes around the world a new normal?

Scientists are working to find answers.

This week at an NSF-funded workshop, "Global Solutions to Regional Problems: Collecting Global Expertise to Address the Problem of Harmful Algal Blooms," researchers discussed the current science on algae blooms, and identified knowledge gaps in bloom prevention and mitigation.

"We hope that this workshop will lead to strategies to mitigate future blooms in waterbodies in the U.S. and around the world," says Bill Cooper, a program director in NSF's Division of Chemical, Bioengineering, Environmental and Transport Systems.

"New nutrient reduction strategies," wrote Paerl and colleagues in the journal Science in October 2014, "should incorporate point and non-point sources, including nitrogen removal in wastewaters, optimization of fertilizer application and erosion controls.

"An investment in joint phosphorus and nitrogen controls will counter the very high costs of harmful algal bloom events and the losses of freshwater resources worldwide."

It's the only way, Paerl says, to keep blooms of cyanobacteria and other algae in check. When it comes to lakes and rivers, streams and ponds, "going green" means anything but.

Related Websites
Whither the diversity of life on Earth? NSF, partners award $23 million for studies of planet's biodiversity: http://www.nsf.gov/news/news_summ.jsp?cntn_id=132506
Earth Week: A Stream Is a Stream Is a Stream: Or Is It?: http://www.nsf.gov/discoveries/disc_summ.jsp?cntn_id=123855&org=NSF
Staple of recipe favorites--the tomato--reveals processes that maintain biodiversity: http://nsf.gov/discoveries/disc_summ.jsp?cntn_id=129676
NSF Grant: Anthropogenic nutrient input drives genetic, functional and taxonomic biodiversity in hypereutrophic Lake Taihu, China: http://nsf.gov/awardsearch/showAward?AWD_ID=1240851&HistoricalAwards=false