Engaging science for everyone 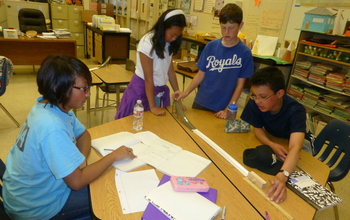 Since the post-Sputnik era, educators have been challenged to improve science education in the U.S.

Science is a way of asking questions, not simply answers to be learned.

For Herb Thier, a leader in science education research, this statement has been a driving force behind his life's work to introduce and broaden the use of inquiry-based learning for students of all ages.

The statement appears boldly on the back cover of The Science and Life Issues textbook, a resource created by Thier, who was the originator and principal investigator for the Science Education for Public Understanding program (SEPUP), one of Thier's many projects funded by the National Science Foundation (NSF).

Thier's journey to improve science education began with nearly a decade of work in and around the classroom, first as a middle school physics teacher and later in administrative roles overseeing science curriculum for the state of New York. During this time, Thier encountered the work of the Physical Science Study Committee (PSSC), a group of educators seeking to reform science education based on the principles of active learning.

After finishing his doctorate in education, Thier took his enthusiasm for this new style of education to the greater Washington, D.C., area where he served as an assistant superintendent. At the time, many teachers viewed the shift toward student engagement with apprehension.

"I would never do that kind of science; we can't," Thier recalls hearing from a teacher in his district. "It gives students too much responsibility."

While Thier understood the comforting familiarity of the traditional lecture, he encouraged his teachers to adopt the new practices, and sought the resources needed to shift the curriculum toward greater student engagement. Looking to bolster excitement and understanding of active learning, Thier invited Robert Karplus, a fellow physicist and science education pioneer, to speak at a workshop on innovations in education.

Within a year of this introduction, the two embarked on a 15-year partnership known as the Science Curriculum Improvement Study (SCIS). The work on SCIS also marked the beginning of Thier's work with the University of California, Berkeley, and his 51-year relationship with NSF.

SCIS began in 1961, at a time the American education system was being swept by a changing tide. Policymakers, spurred by pressure to compete with the Soviet Union's Sputnik achievement, wanted to find ways to inspire students to pursue future careers in science and research. As a result, NSF began supporting research on science learning in the early 1960s, with SCIS as a key project in the portfolio.

The mission of SCIS was to develop a framework of fundamental science concepts around the student's individual experience with natural phenomena. This method of building critical thinking and analytical skills is still known today as scientific literacy. Looking to align the SCIS models with the cutting edge of learning theory, Thier and Karplus consulted the work of Jean Piaget, a renowned developmental psychologist, to construct frameworks for inquiry-based learning. The SCIS learning model describes three phases of instruction that guide students toward knowledge through first-hand experience: exploration, invention and discovery.

Looking back, Thier recalls the energy and enthusiasm surrounding the SCIS project. The work captured the growing attention on science education, providing educators and researchers the opportunity to incubate new ideas and set them in motion. As an emerging field, Thier noted "the importance of building a network of leaders" to continue to provide an environment of collaboration within the discipline itself.

In addition to SCIS, Thier began what would become 40 years of leadership in instructional materials development and teacher enhancement projects at the Lawrence Hall of Science at the University of California, Berkeley.

Researchers there, guided by findings from SCIS, designed grade-appropriate content and exercises meant to engage elementary students with the concepts rather than "watering them down." Additionally, Thier and his team began to adapt the SCIS model for visually impaired students and special education classrooms, following his belief that the field of science should be open to everyone.

In 1987, Thier launched the Chemical Education for Public Understanding Program (CEPUP) at the Lawrence Hall of Science, with a focus on developing interdisciplinary materials for middle and high school students. This program, also funded by NSF, eventually spread to more than 40 states and a number of other countries, including Australia, Spain, and Canada.

To encourage curiosity and an informed citizenry, CEPUP's instructional resources emphasized interactions with chemicals in everyday life, and featured easy-to-use materials to alleviate the burden on instructors. Thier describes the CEPUP approach as issue-oriented science with an aim "to teach the science content, processes, and problem-solving skills necessary for individuals to make informed, personal, evidence-based decisions on chemical-related issues."

By the early 1990s, as Thier's work with CEPUP broadened to include a number of other science fields, the program evolved into SEPUP, whose work included a physical sciences curriculum featuring content areas that students accessed on a daily basis: the human body, living partnerships in evolution and ecosystems, and the ways humans use tools and ideas to adapt to their external environment.

Ever conscious of the need to support teachers in the application of hands-on learning, SEPUP's work included leadership and professional opportunities to build a community of engaged educators, as well as research to understand the impact of these development programs.

Through SEPUP, Thier also oversaw the development of textbooks, including Science and Life Issues, and the resources needed to conduct hands-on experiments in the classroom, such as LabAids, kits that contained the basic equipment and instructional material for different activities. These products, formed through a rigorous testing and evaluation process, addressed a key challenge in active learning: Many teachers lacked the necessary physical and pedagogical tools.

Today, SEPUP continues to develop issue-oriented science curricula and resources for use nationwide.

Recalling over five decades of work with NSF program officers, Thier credits their strong background in science and science education for their "significant thinking behind the projects and a dialogue of questions founded on a drive to improve science education." These discussions oriented the projects toward evaluation, always looking to support the research with evidence and to dig deeper for understanding.

While Thier's career led him outside of the classroom itself, his memories as a teacher motivated him to lead projects and develop products that would have a positive impact on the student's learning experience. This sense of purpose and his commitment overshadowed issues that arose, such as the realization that others had begun to reuse and replicate content from his projects without permission. Instead of pursuing legal action, he took it as a sign that the lessons and principles of active learning would spread to more students.

Looking forward, Thier hopes that science education continues to introduce students to the tools they need for discovery across disciplines, so that "these flexible skills can be applied to the complex problems of the 21st century."

"Herb Thier's years of NSF-supported research gave us a solid understanding of the effectiveness of inquiry-based learning," said Joan Ferrini-Mundy, who leads NSF's Directorate for Education and Human Resources. "As science, technology, engineering and mathematics (STEM) education educates a new generation of students, we continue to support development and testing of the best tools, techniques and teacher development to make students of all backgrounds successful."