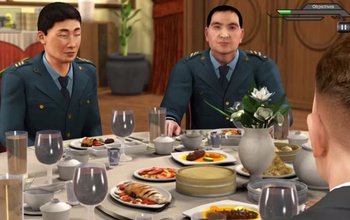 Communication skills are critical in a global economy.

Since communication often occurs across cultures, people must know more than just the vocabulary and grammar of a foreign language. They must also have cultural awareness--a recognition of the "dos and don'ts" that each culture maintains--to communicate smoothly, effortlessly and with confidence.

Virtual role-play--where learners engage in simulated encounters with artificially intelligent agents that behave and respond in a culturally accurate manner--has been shown to be effective at teaching cross-cultural communication.

"You learn by playing a role in a simulation of some real-life situation," said W. Lewis Johnson, a former professor at the University of Southern California and co-founder of Alelo Inc., a company that makes cyberlearning tools. "You practice communication with some artificial intelligent interactive characters that will listen and respond to you, depending on what you say and do. It helps develop fluency, but it also helps to develop confidence."

With an award from the National Science Foundation (NSF), Johnson and his team at Alelo (a Hawaiian word that means "language" or "tongue") developed a range of products to teach cross-cultural communication using virtual worlds. Alelo's tools have already achieved success in military training and English-as-a-second-language (ESL) programs and are now being applied to a wide range of learning applications.

"We found in our military training that when soldiers use this approach, once they get into a foreign country--let's say they're sitting down with local leaders--they feel as if it's a familiar situation to them, even though they've never experienced it in real life before," Johnson said. "That degree of comfort is extremely powerful."

As an example, Johnson showed a role-playing scenario that orients officers to the etiquette expected at a Chinese banquet. (The goal: Don't get drunk!)

"How do you show proper respect for your host in participating in these toasts but not fall down drunk in the process?" Johnson asked. "That's an effective communication problem. Role-playing teaches some of the communication skills that you could use if you find yourself in this situation."

Importantly, Alelo's virtual role-playing tool gives one the ability to practice conversation and etiquette until you get them right.

To develop a version to teach ESL to those in the United States, the researchers interviewed immigrants to determine what cultural issues they found most problematic. The instruction they created--available in multiple languages--explains how to handle different situations that one might face as a new immigrant in the U.S. and provides tips on culturally appropriate behavior.

Students can practice on a range of devices, allowing them to use the program to prepare for classroom activities, as follow-up to classroom activities or as needed in the field. The ESL program even offers a virtual coach who provides help and feedback.

In 2012, Alelo partnered with the Commonwealth of Virginia to develop and test virtual role-play learning products for conversational practice in Chinese.

Tammy McGraw, the former director of digital innovations and outreach at the Virginia Department of Education, had met Johnson at a Wired conference years earlier and, although Alelo was demonstrating cyberlearning technologies for soldiers, McGraw was struck by how the virtual characters were able to impart both linguistic and cultural lessons.

Moreover, the software could address the shortage of qualified teachers able to teach Chinese, Arabic and other less popular languages, while allowing the state to increase the number of students who were able to take classes that were overenrolled.

"The virtual classes enabled students to be more self-directed than teachers could normally support," McGraw said.

Recently, McGraw and Johnson have been adapting the insights learned in virtual role-playing research for a new platform: a robo-tutor.

With support from NSF, Alelo is working in partnership with the robotics company RoboKind, taking RoboKind's lifelike social robot Zeno R25 and equipping it with the ability to converse in Chinese. The project, named RALL-E, will give learners abundant opportunities to practice their conversational skills and lowers the entry barrier for difficult languages such as Chinese.

"It's non-threatening," McGraw said. "The robot is not going to be offended if you say the wrong thing. He's not going to laugh at you if you pronounce Chinese incorrectly. But he also has the ability to engage learners through active interaction."

Though still in the prototype phase, they imagine RoboKind could be used in the classroom, with kids coming up to engage with it at will. It could also be used outside of formal class as a personal tutor. Teachers at Thomas Jefferson High School of Science and Technology in Alexandria, Va., signed on to try out the computer-based pilot.

By combining artificial intelligence and robotics with insights from virtual role-playing research, Alelo is pioneering new avenues of personalized education.

"The question we're trying to answer is: What are the aspects of the technology that are most important for mastering communicative skills?" McGraw said.

"We have two different realizations of virtual role-play technology. They have different strengths, different weaknesses. What are they going to be good for? Which is good for what? Doing this research, we hope to get some answers to those questions."