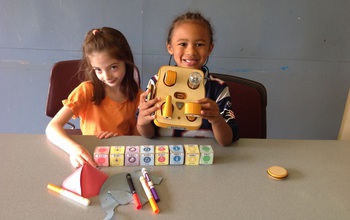 Playgrounds are popular spaces for young children to play and learn. They promote exploration of the physical environment and motor and social skill development, allowing young children to be autonomous while developing core competencies.

Playpens, by contrast, corral children into safe, confined spaces. Although they are mostly risk-free, there is little opportunity for exploration and imaginative play.

From a developmental perspective, the playground promotes a sense of mastery, creativity, self-confidence, social awareness and open exploration, while the playpen hinders development of these traits.

"We're trying to develop technologies to get us as close as we can to the metaphor of the playground," said Marina Umaschi Bers, a professor of computer science and child development at Tufts University, director of DevTech research group and author of "Designing Digital Experiences for Positive Youth Development: From Playpen to Playground."

Many are familiar with Bers through her work on ScratchJr., a programming language where even students who are too young to read and write can put together actions in a sequence to create interactive stories, games and animations.

Last June, with support from the National Science Foundation (NSF), Bers and her colleagues released ScratchJr. as a free app for children ages 5 to 7. (A Kickstarter campaign in May raised $75,000 to adapt the app for Android and iPad.) As of February 2015, ScratchJr. had more than 500,000 downloads worldwide.

Using KIBO, students scan wooden blocks to give robots simple commands and in the process learn sequencing, one of the most important skills for early age groups. By combining a series of commands, kids make the robot move, dance, sing, sense the environment or light up. [See videos above.]

With an NSF Small Business Innovation Research grant, Bers co-founded KinderLab Robotics and, using insights from her 15 years of research, transformed the KIWI prototype into a widely-available cyberlearning toy that could impact a large number of kids.

KIBO shipped its first several hundred units in 2014, although, according to Bers, building and selling KIBO was only a small part of the challenge.

"We don't want to give away the technology and wash our hands of it," Bers said. "We're training the whole individual."

For that reason, KIBO comes with a curriculum, lesson plans, badges, design journals, and even teacher and parent training.

In March 2015, Bers and Amanda Sullivan, also of Tufts' DevTech group, published an article in the International Journal of Technology and Design Education describing learning outcomes from the eight-week robotics curriculum in prekindergarten through second grade. The results showed that beginning in prekindergarten, children were able to master basic robotics and programming skills, while older children were able to master increasingly complex concepts using the robotics kit in the same amount of time.

Both the KIBO robotic kit and the ScratchJr. programming language have left the academic ivory tower and are now available to the wider public.

"When we teach children how to read and write, we don't expect everyone to become a journalist or a novelist," Bers said, speaking about KIBO in The New York Times. "But we believe they'll be able to think in new ways because it opens the doors to thinking. We believe the same thing for the skills of programming and engineering."