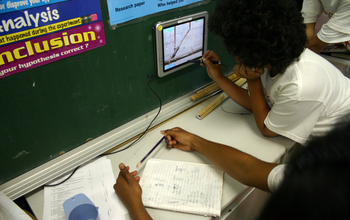 Tablets on the classroom walls serve as viewports into an imaginary space filled with virtual fauna.

In the schools where Tom Moher works, classrooms are imbued with science through simulated earthquakes, virtual bugs in the walls and digital portholes to the solar system.

"I want to immerse students in the physical space and time of scientific phenomena," said Moher, an associate professor of computer science, learning sciences and education at the University of Illinois at Chicago. "Sometimes I use the term 'marinating' the kids. Time affords me the opportunity for surprise. Nature happens when it happens, not just because it happens to be science period."

In his talk at the National Science Foundation (NSF) last spring as part of the "Designing Disruptive Learning Technologies" series, Moher showcased projects that use "embedded phenomena" to bring scientific processes into the classroom and to foster learning from those experiences.

One of the projects he described (supported by an award from NSF) was RoomQuake, an earthquake simulation system where the classroom itself becomes an active seismic area.

At unpredictable times throughout the unit, rumbles emanating from speakers attached to simulated seismographs signal to the class that an earthquake is occurring.

Students rush to terminals around the classroom, read the data from seismograms and use that information to determine the magnitude of the event, the distance of the event from the recording stations and, eventually, the epicenter of the earthquake. Over the course of six weeks and dozens of earthquakes, students discover a "fault line" emerging.

Moher's immersive learning experiences bring technological richness and narrative drama to the classroom. This is true not only of RoomQuake but also HelioRoom, where students are asked to imagine that the sun is located in the center of their classroom, and Wallcology, where tablets adjacent to the walls of classrooms serve as viewports into an imaginary space inside the walls filled with the virtual fauna.

The projects also highlight the role of computing and data analysis in domains from seismology to astronomy.

In Moher's most recent project, HungerGames, students learn about animal foraging behaviors using stuffed animals with embedded radio frequency identification (RFID) tags that act as tangible avatars to represent their foraging among patches of food (with camouflaged RFID readers) distributed around a classroom.

During a two-period pilot enactment of the unit, Moher and his team demonstrated the feasibility of the design for classroom use, finding evidence of emotional relationships between learners and avatars, and the emergence of unanticipated behaviors that promoted new questions about the science phenomena. The results provisionally support the effectiveness of the activity as a science learning environment.

Moher's team presented their results at the "Proceedings of the 8th International Conference on Tangible, Embedded and Embodied Interaction" in 2014.

Whether it is students peering into a secret insect habitat or rushing to locate the epicenter of an earthquake, "the kids and teachers are our willing accomplices," Moher said.

"It's their imagination, along with a little bit of technology, that brings the room alive."