Games for good: Learning while you play 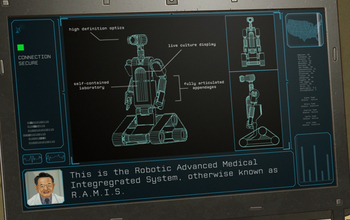 Image from the cyberlearning game, "Progenitor X," developed at the University of Wisconsin.

Interactive web-based projects like "Galaxy Zoo" and "Fold.it" are compelling examples of how games can engage thousands of learners in citizen science--and even lead to scientific discoveries.

But what does it take to foster learning in the midst of such enthusiastic engagement? And how can video games be used effectively in a school setting?

Kurt Squire is a professor of digital media in curriculum and instruction at the University of Wisconsin-Madison and director of Games+Learning+Society. In his lab, developers with more than 120 years of combined experience create games for learning based on everything they know about how people absorb content and what makes video games special and fun.

Then they ask students to test the games, monitoring their clicks and mouse movements (and sometimes even their brain activity) to determine how players interact with the game, and whether these interactions lead to engagement and learning. Based on the response, they change the game to make it more effective.

Besides captivating students, video games can let players explore and experiment in a virtual environment to deepen their understanding and apply what they are learning.

For example, in the game "Citizen Science," created by Squire and his team, players help restore Lake Mendota, a real lake in Wisconsin that, in the year 2020, has become polluted. As players explore the landscape, they take water samples, interact with a virtual, simulated watershed and talk with stakeholders.

"We think everyone should have the experience of using science to make a difference in the world," explains Squire. "So, in "Citizen Science," you talk to local stakeholders about important issues, make observations, collect evidence and make arguments based on evidence for the future of your watershed."

"Citizen Science" is unique in that it is built in close collaboration with Robert Bohanan and Steve Carpenter of the National Science Foundation (NSF)-funded Long Term Ecological Research Center on North Temperate Lakes. Although simplified, "Citizen Science"'s model is accurate enough to be used in graduate school courses.

Games like "Citizen Science" are designed to help students learn subject matter content and develop critical learning skills while still having fun. But "as good as "Citizen Science" is," Squire admitted, "few would confuse it for a commercial entertainment game or play it outside of school."

In response to this need for a game that might reach even broader audiences, Squire and colleagues created "Progenitor X", a zombie-themed tissue engineering game.

In "Progenitor X", players learn about the relationships between cells, tissues and organs while trying to survive a zombie invasion.

The scientific concepts at the center of the game are part of the core biology science standard taught from middle school to college.

"Progenitor X" also takes a further leap into the future to explore potential advances in regenerative medicine and medical device engineering that are currently being studied in the laboratory setting.

For instance, using principles from stem cell research, players develop a basic understanding of the process by which adult human skin cells can be reprogrammed to become one of over 200 different human cell types. The scientific content of "Progenitor X" is based on research being conducted at the Morgridge Institute for Research and the Wisconsin School of Medicine and Public Health.

By exploring data gleaned from users playing the game, Squire and his team have identified patterns in play within and across players (using data mining and learning analytic techniques) and have developed statistical methods for testing hypotheses related to content models.

"These projects are not only using technologies that only recently became possible. They also build on decades of excellent research on how people learn," said Chris Hoadley, the program officer at NSF who leads the Cyberlearning program. "I believe it's only by advancing technology design and learning research together that we'll be able to imagine the future of learning."

[In case you think all of Squire's work involves a gloomy outlook, he's also taken up the Dalai Lama's challenge to developers to create a video game that promotes mindfulness. His group's effort, "Tenacity", is currently under development.]