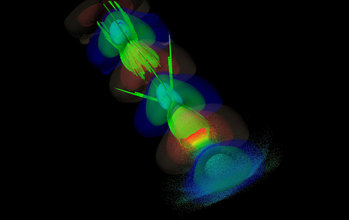 Traditionally, particle accelerators have relied on electric fields generated by radio waves to drive electrons and other particles close to the speed of light. But in radio frequency machines there is an upper limit on the electric field before the walls of the accelerator "break down," causing it to not perform properly and leading to equipment damage.

In recent years, however, scientists experimenting with so-called "plasma wakefields" have found that accelerating electrons on waves of plasma, or ionized gas, is not only more efficient, but also allows for the use of an electric field a thousand or more times higher than those of a conventional accelerator.

And most importantly, the technique, where electrons gain energy by "surfing" on a wave of electrons within the ionized gas, raises the potential for a new generation of smaller and less-expensive particle accelerators.

"The big picture application is a future high energy physics collider," says Warren Mori, a professor of physics, astronomy and electrical engineering at the University of California, Los Angeles (UCLA), who has been working on this project. "Typically, these cost tens of billions of dollars to build. The motivation is to try to develop a technology that would reduce the size and the cost of the next collider."

The National Science Foundation (NSF)-funded scientist and his collaborators believe the next generation of smaller and cheaper accelerators could enhance their value, expanding their use in medicine, national security, materials science, industry and high-energy physics research.

"Accelerators are also used for sources of radiation. When a high energy particle wiggles up and down, it generates X-rays, so you could also use smaller accelerators to make smaller radiation sources to probe a container to see whether there is nuclear material inside, or to probe biological samples," Mori says. "Short bursts of X-rays are currently being used to watch chemical bonds form and to study the inner structure of proteins, and viruses."

Just as important, albeit on a more abstract level, "the goal of the future of high-energy physics is to understand the fundamental particles of matter," he says. "To have the field continue, we need these expensive, large and complex tools for discovery."

NSF has supported basic research in a series of grants in recent years totaling $4 million, including computational resources. The Department of Energy (DOE) has provided the bulk of the funding for experimental facilities and experiments, and has contributed to theory and simulations support.

"Mori's work is the perfect example of an innovative approach to advancing the science and technology frontiers that can come about when the deep understanding of fundamental laws of nature, of the collective behavior of charged particles that we call a plasma, is combined with state-of-the-art numerical modeling algorithms and simulation tools," says Vyacheslav (Slava) Lukin, a program director in NSF's Physics Division.

Using DOE's SLAC National Accelerator Laboratory, the scientists from SLAC and UCLA increased clusters of electrons to energies 400 to 500 times higher than what they could reach traveling the same distance in a conventional accelerator. Equally important, the energy transfer was much more efficient than that of earlier experiments, a first to show this combination of energy and efficiency using "plasma wakefields."

In the experiments, the scientists sent pairs of electron bunches containing 5 billion to 6 billion electrons each into a laser-generated column of plasma inside an oven of hot lithium gas. The first bunch in each pair was the "drive" bunch; it blasted all the free electrons away from the lithium atoms, leaving the positively charged lithium nuclei behind, a configuration known as the "blowout regime."

The blasted electrons then fell back in behind the second bunch of electrons, known as the "trailing" bunch, to form a "plasma wake" that thrust the trailer electrons to higher energy.

While earlier experiments had demonstrated high-field acceleration in plasma wakes, the SLAC/UCLA team was the first to demonstrate simultaneously, high-efficiency and high-accelerating fields using a drive and trailer bunch combination in the strong blowout regime. Furthermore, the accelerated electrons ended up with a relatively small energy spread.

"Because it's a plasma, there is no breakdown field limit," Mori says. "The medium itself is fully ionized, so you don't have to worry about breakdown. Therefore, the electric field in a plasma device can be pushed to a thousand or more times higher amplitude than that in a conventional accelerator."

Chandrashekhar Joshi, an UCLA professor of electrical engineering, led the team that developed the plasma source used in the experiment. Joshi, the director of the Neptune Facility for Advanced Accelerator Research at UCLA, is the UCLA principal investigator for this research and is a long-time collaborator with the SLAC group. The team also is made up of SLAC accelerator physicists including Mike Litos and Mark Hogan. Mori leads the group that developed the computer simulations used in the experiments. Their findings appeared last fall in the journal Nature.

"The near term goal of this research is to produce compact accelerators for use in universities and industry, while a longer term goal remains developing a high-energy collider operating at the energy frontier of particle physics," Mori says.