Increasing opportunities for Alaska Natives in science and engineering 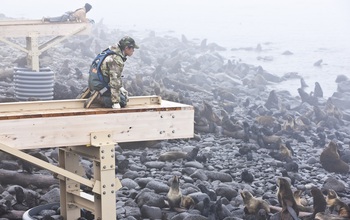 In the mid-1970s, Chicago-native Herb Schroeder was playing rugby and tending bar when he decided to move to Alaska and work on the massive trans-Alaska oil pipeline.

The relocation, he says, "literally saved my life." It also led to a doctorate in civil engineering and a mission: to give back to the state of Alaska.

His research in rural sanitation solidified his belief that efforts led by Alaska Natives could dramatically improve conditions in rural villages. However, a dearth of Alaska Natives with science and engineering (S&E) degrees made creating a cadre of qualified leaders impossible.

Schroeder's mission now had a goal: To help Native Alaska students succeed in college math and science courses and ultimately increase their numbers in the state's  science, technology, engineering and mathematics (STEM) industries.

In 1995, the University of Alaska (UA) engineering professor founded the Alaska Native Science & Engineering Program (ANSEP) with one student and a few thousand dollars in scholarship money. Since that time, ANSEP has grown into an award-winning pipeline program serving more than 1500 students in six distinct programs from middle school to graduate school. During the past 20 years, 350 Alaska Natives have earned S&E degrees.

Developing a pathway for students

Schroeder's initial vision created an academic community at the university in which students received support from their peers and faculty mentors.

"Everything is so different from what they're used to. They go from a subsistence lifestyle to the Western World in college. It's the rare student who can succeed without any support," explains Schroeder. Joint undergraduate research projects, summer internships and social outings developed a sense of community and teamwork.

While working with the students, Schroeder discovered many were ill-prepared for college-level math, with some possessing only a seventh-grade understanding. To promote success in math and science, Schroeder wanted to initiate a pipeline program that would focus on middle and high school students. However, he received little encouragement from the Alaskan school system.

"I talked to the superintendent and teachers who felt Alaska Natives didn't have the capacity to do mathematics," Schroeder says. "At that point, I knew the problem was bigger than I thought, and I needed to develop a program outside of the schools. It's not like these kids are innately less [capable]. It would be like dropping me in the Amazon jungle. How well would I do?"

As Schroeder embarked on his mission to fund the high school and middle school programs, he received $100,000 from an oil company. A university administrator told him to send the money back because he didn't want to "dumb the school down" by enrolling Alaska Natives. At that point Schroeder resolved "to make [the ANSEP program] bigger than me."

Establishing a strong financial base

To do this, Schroeder knew he had to cultivate a diversified financial base. A grant from the National Science Foundation's (NSF) Louis Stokes Alliances for Minority Participation (LSAMP) program in 2001 marked a turning point.

"The first LSAMP award provided us with credibility and an opportunity to leverage funds through NSF," says Schroeder.

A dollar-for-dollar match requirement enabled Schroeder to persuade industrial partners to donate $5 million. NSF has twice renewed the LSAMP grant. The foundation has also supported ANSEP's computer assembly component in which students build a PC they can keep, provided they earn a "C" or better in chemistry, physics and trigonometry in high school.

Recent donations include a five-year, $5 million grant from the Rasmuson Foundation through which UA Anchorage will match the award with increased program support that will reach $1 million annually. Another partner, Alaska Airlines, recently pledged $1 million over three years to transport students to ANSEP activities in Anchorage.

Network support has funded a building on the grounds of UA, a space reserved solely for ANSEP students; the ANSEP endowed chair at UA; plans for a building to house a new high school in Anchorage, where students can earn both their high-school diploma and an engineering degree in six years; leadership training for the ANSEP management team; faculty positions in UA's College of Engineering; and continued funding for ANSEP staff.

"My hat's off to him," says NSF's A. James Hicks, program officer for LSAMP, about Schroeder. "He has taken leveraging to a very high level."

In the last five years, ANSEP's success has made it easier to win support. Lobbying efforts in the Alaska state legislature created a line item for ANSEP in the state's operating budget as well as passage of H.B. 278 in May 2014. The law provides financial support so that ANSEP can offer 12 middle school academies annually.

Michelle Yatchmeneff, a doctoral candidate in engineering education who credits the program with her success, says Schroeder's ability to persuade others to support ANSEP comes from strong outcome statistics.

"He shows what the students can accomplish, how many completed a requirement...not just the number who participated," she says.

Data compiled for an Urban Institute evaluation of the ANSEP program indicates that:

As the Middle School Academy component continues to grow, ANSEP anticipates that approximately 4,000 students will be in the pipeline by 2020. According to the 2014 ANSEP Component Report, if only half of these students earn S&E degrees, the total would be six times the number earned over the last two decades.

Schroeder would like to see some of these students obtain teaching certificates and head into the rural villages to teach.

"I'd like to see one ANSEP STEM teacher in every village by 2025. If we can accomplish this, we will change people's attitudes."