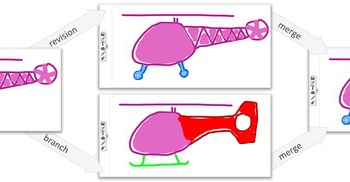 Concept sketches of a toy helicopter in skWiki, which supports multiple histories for an object.

Increasingly, professionals in all sorts of fields need to work together to rapidly design new and complex solutions to pressing problems. Often, these teams are geographically or temporally distributed.

"We've had great tools in the past to collaborate on texts, but we haven't had great tools for us to collaborate visually," said Kylie Peppler, an assistant professor of learning sciences at Indiana University. "As a result, much of today's innovative design work still occurs through pen and paper sketching, which is challenging to share and systematically build upon."

On Thursday, June 11, Peppler takes part in the Capitol Hill Maker Faire, which immediately precedes the June 12 to 18 Week of Making announced by the White House. Peppler will be on a panel at 2:00 p.m. titled "Making in Community."

For the last 18 years, Ramani has taught a class on toy design at Purdue. The university purchased its first 3-D printers in 1995 and has consistently been on the technological cutting edge. But digital collaboration among students had remained a challenge.

"Computers have been individualistic devices," said Ramani. "But a new class of technology is emerging that allows us to engage in our individual learning process and also in a collaborative process."

SkWiki is an example of such technology. It allows many participants to collaboratively create digital multimedia projects on the web using many kinds of media types, including text, hand-drawn sketches and photographs.

Whereas collaborative writing tools like Wikipedia and Google Docs don't allow for divergent thinking, SkWiki does, the researchers say. Individuals can contribute elements to others' designs or clone components from your peers' work and integrate them into your own.

Ramani and Peppler released the tool to the public in March 2014, and presented the project at the 2014 Association for Computing Machinery  conference on human factors in computing systems last June.

"Juxtapoze lowers the barriers to entry for people to make creative things in a very fluid manner," said Peppler.

A plug-in for skWiki--the first of many, according to the researchers--Juxtapoze quickly matches scribbles generated by the designer with images found on the Internet, leading to serendipitous connections; for instance, a circle may become a wheel, or a squiggly line, a snake.

With Juxtapoze, "technology starts to be a partner in the design process and gets students to think in more divergent ways," she said.

Ramani and Peppler believe the two technologies have the potential to transform the design process into a more collaborative, creative and efficient endeavor.

"We've created a platform that can change things in a strategic way to maximize learning," said Ramani. "This new class of tools allows us to have better fluidity between our ideas and our design and lets students accomplish complicated engineering concepts in a short time scale."

Beyond enabling collaboration, SkWiki and Juxtapoze have the capacity to generate useful data about the creative design process itself, a potentially rich source for research into the impact of technology and collaboration on learning processes.

"Process is more important than final product, but it's often not treated that way," Peppler said. "These tools capture and privilege the process."