Responding to terror (again): A study of the Boston Marathon bombing

Media exposure to prior tragedies may sensitize people to new disasters 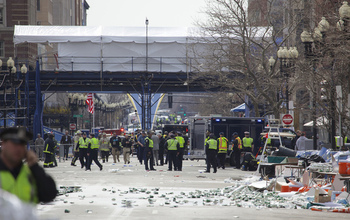 The city of Boston endured one of the worst terrorist attacks on U.S. soil in April 2013, when two pressure-cooker bombs exploded near the finish line of the Boston Marathon. While emergency workers responded to the chaos and law enforcement agencies began a manhunt for the perpetrators, Americans fixed their attention to television screens, Internet news sites and forums, and Twitter, Facebook and other social media.

In doing so, some of those people may have been raising their acute stress levels, with a corresponding increase in symptoms such as difficulty sleeping, a sense of emotional numbness, or re-experiencing their trauma. Such responses, exhibited shortly after exposure to a trauma, have been linked with long-term negative health effects.

A trio of researchers in psychology and social behavior and nursing science at the University of California (UC), Irvine--supported by the Social Psychology Program in the National Science Foundation's (NSF) Social, Behavioral and Economic Sciences Directorate--released a paper last year finding that for some individuals, intense exposure to the Boston marathon bombing through media coverage could be associated with more stress symptoms than those who had direct exposure to the attack. Their latest research article, published this month, finds that the likelihood of those symptoms developing also increases with multiple exposures to prior trauma.

In other words, the more hours you spend following disasters and tragedies in the media, the more sensitized you may become.

Garfin, E. Alison Holman and Roxane Cohen Silver used survey results from residents of metropolitan Boston and New York City collected within weeks of the Marathon bombing to examine the relationship between how they responded to the attack and their media-based exposure to three previous traumatic events: the Sept. 11, 2001, terrorist attacks, Superstorm Sandy and the Sandy Hook Elementary School shooting.

"We were able to specifically explore the accumulation of exposure to collective disasters," Silver said. "We looked at three different, collective events to which people on the East Coast--and in particular New York and Boston--have been exposed."

The researchers looked at levels of acute stress in Boston and New York residents within a month after the marathon bombing. The Boston residents were much closer to that act of terrorism, but the researchers did not find that proximity necessarily correlated with higher stress levels. According to their report, New Yorkers already had somewhat heightened stress levels, due to their exposure to Superstorm Sandy, 9/11 and the Sandy Hook shooting, making their responses to the Marathon bombing comparable to those of Bostonians.

These findings do not imply that merely reading one article or watching a single program about a community trauma will necessarily increase stress. The research team's first paper found that acute stress symptoms increased as the number of hours per day of bombing-related media exposure in the week following the bombing increased. People who reported three or more hours per day of media exposure reported higher stress symptoms than those who reported less than one hour per day, and individuals who reported six or more hours a day reported the highest levels of symptoms.

"There's variability in how this happens," Holman said. "And that's another research question that has to be addressed--to understand what leads to those differences, why some people have sensitivities and others don't."

There are other limits on the findings. The data were correlational--they showed a relationship between increased media exposure to traumatic events and the development of stress symptoms, but they don't provide a direct causal link. Still, based on the evidence the researchers have reviewed thus far, coupled with the findings from a similar study they conducted about exposure to media after the 9/11 attacks, the team members have recommendations for news consumers.

"My recommendation is to turn off the TV and not expose yourself too much through social media or other media sources," Holman said. "Find out what you need to know from the news, but don't overexpose yourself."

Garfin emphasized that overexposure is the key factor.

"I wouldn't say don't stay informed or tune out the news," she said. "It's the repeated exposure to things, which probably isn't giving you new information. We're not saying turn off the TV totally. Stay informed, then go on with your daily life."

The researchers are likely to yield much more in the way of results on the topic. The latest paper represents the first wave of data collection they performed. There are four more following. Their next article, they said, will examine how specific types of media--such as television or social media--are associated with acute stress levels.