The N|uu language, spoken by a few elderly people in South Africa, has features that help build a greater understanding of human language 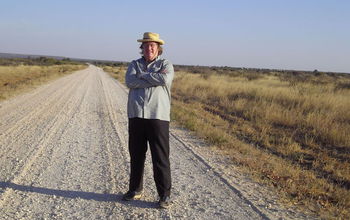 Collins studies languages of southern Africa that have "click" consonants.

There are fewer than half a dozen people left in the world who are native speakers of N|uu, a Khoisan language traditionally spoken in the Northern Cape of South Africa. The remaining speakers now live in and around the town of Upington. Sadly, they are elderly and when they die, the language likely will die with them.

"When one of these languages dies, it's a part of our human cultural heritage that is dying," says Chris Collins, a professor of linguistics at New York University. "These languages have unique features that tell us much about human language in general. When they die, it's a real tragedy."

Collins studies Khoisan languages, which are a group of non-Bantu languages of eastern and southern Africa that have "click" consonants. These languages fall into three subgroups: northern, central and southern, with two outliers in eastern Africa. How these subgroups are related historically is an open question, he says.

In recent years, Collins has been focusing on N|uu, which for a long time experts feared had been lost. But in 1997, the late linguist Anthony Traill interviewed a woman in her 90s, Elsie Vaalbooi, and verified that she was speaking N|uu. Ultimately, other surviving speakers were identified as a result of their attempts to reclaim ancestral lands taken from them under apartheid.

"Nobody was aware that the language still existed," Collins says. "It was a surprise. Everybody thought it was dead, but it wasn't."

But "it's going to die very quickly because there are so few speakers left, and they are all older than 60. They are trying to teach it to succeeding generations, but it's not easy, and there's not a lot of money to do it."

Collins does not speak N|uu, but he is studying and documenting its complexities, believing that insights about this unusual language add to the expanding knowledge of human language.

"I find N|uu and other Khoisan languages fascinating," he says. "Each has unique structures, not found in any other languages on Earth. By studying these, you gain insights into the human capacity for language."

Collins recently received a prestigious fellowship from the John Simon Guggenheim Memorial Foundation, which annually supports a diverse group of scholars, artists, and scientists chosen on the basis of prior achievement and exceptional promise.

Collins also has received a series of grants in recent years from the National Science Foundation (NSF) for his linguistic research, totaling about $400,000. The NSF-funded work also includes research on other Khoisan languages, including ǂHoã, Sasi and Juǀ'hoan, funding for a cross-linguistic syntactic database, as well as for the African Linguistics School.

The NSF-supported work on ǂHoã resulted in a grammatical description of the language, co-authored with the late linguist Jeffrey S. Gruber.

"One of the most remarkable features of ǂHoã is its complicated system of plurality," Collins says. "In English, to form a plural of a noun like "cat", one adds an "s" to form "cats". ǂHoã has a much more complicated system involving double plurals, with both a plural prefix and a plural suffix, that depends on the type of possessor a noun has, for example, 'their houses' has a different plural than 'their mothers.'

"Also, in ǂHoã, a verb can be put into the plural, in which case it means that the event described by the verb takes place several times," he adds. "For example, in ǂHoã, 'I shot' could be pluralized as 'I shots,' meaning I shot several times. Linguists refer to this way of pluralizing verbs as pluractionality. Studies of languages with pluractionality morphemes have deep implications for the study of the meaning of verbs in natural language."

Collins, together with the late linguist Henry J. Honken, also have shown that other Khoisan languages have traces of the complicated system of plurality found in ǂHoã.

In the case of N|uu, he and a linguist colleague in Namibia, Levi Namaseb, produced a grammatical sketch of the language, a book that provides an overview of its unusual structures. Collins and Namaseb worked together with American linguists Amanda Miller and Bonny Sands, who documented the sound system of N|uu.

As one example of a unique syntactic feature, N|uu uses a particular word to introduce expressions into the verb phrase, which he calls the "linker." This word sounds like "ng'' that one finds in the English word "sing".

For example, if someone were to say "I am afraid of your dog," it would be "I am afraid ng your dog" in N|uu. "It looks like it plays the role of 'of' but it doesn't always have the same role in the N|uu language that 'of' has in English," he says.

Also, the linker introduces adverbs. "He will dance ng tomorrow."

"Although the linker appears with a post-verbal adverb, it does not appear with a pre-verbal adverb, as in 'he will tomorrow dance,"' Collins says. "The linker is also found in 'how' questions, for example, 'how will he chop ng the wood?"

Collins' goal is to try to understand the bewildering array of contexts in which the linker appears, and to document how its use varies among the Khoisan languages.

"These results tell us about how a particular group of human languages organizes the verb phrase, and thus help establish the kinds of cross-linguistic variation a general theory of human language must account for," he says.

"It is unclear how the northern and southern Khoisan languages all came to have the linker," he says. "One hypothesis is that they borrowed it from each other after a period of extensive pre-historic contact. Another hypothesis is that the languages share a common ancestor, and that is why they all have the linker. I think personally that the northern and southern Khoisan languages are historically related, but the evidence is not so compelling. How did they come to share a linker? It has a very specific kind of syntax."

To gather their material, he and Namaseb conducted extensive interviews over three summers with the remaining N|uu speakers, who also speak Afrikaans, asking specific questions about language constructions, and recording the responses. They also recorded a number of stories told by the N|uu consultants.

The ALS is a two-week institute that takes place during the summer, and brings the latest work in core areas of linguistics to 70 students from African universities. The areas of focus are syntax, semantics, phonology, sociolinguistics and fieldwork.

"We have been very successful in helping graduate students to find research topics, to complete their dissertations and to gain admissions into competitive European and North American graduate schools," he says. "These students are very eager and very smart, and we have a lot of high caliber teachers. Organizing and teaching at the ALS has been one of the most rewarding of all my teaching experiences."