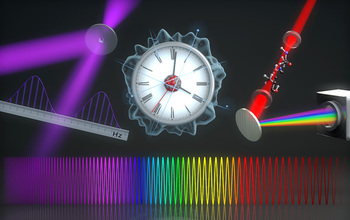 It almost sounds like a riddle: What tool has transformed basic scientific research and led to new technologies in so many different fields--timekeeping, medical research, communications, remote sensing, astronomy, just to name a few?

It is not a tool that most people have heard of, yet its impact is undeniable: laser frequency combs. These "rulers" of light very simply measure different light frequencies that are evenly spaced. The exact spacing of frequencies is key to manipulating light for various applications.

One application has dramatically improved optical atomic clocks. Another is a medical breath analyzer that can detect and measure trace amounts of simple molecules, such as hydrogen peroxide and carbon monoxide, to diagnose diseases. Laser frequency combs are also used as precision rulers to search for exoplanets outside our solar system. In the lab, experimental physicists use them to watch chemical reactions unfold in real time.

Laser frequency combs appeared in 1999 when teams led by Ted Hänsch at the Max Planck Institute for Quantum Optics and Steve Cundiff, John Hall, and Jun Ye at JILA built the world's first laser combs. (JILA is a National Science Foundation-funded joint institute of the University of Colorado Boulder and the National Institute of Standards and Technology's Boulder laboratories.)

These laser combs produced thousands of separate colors, or frequencies, of laser light, all perfectly overlapped in time and space. When these frequencies are displayed on a graph, they are sharp, perfectly even-spaced spikes, resembling the teeth of a hair comb. The first laser frequency combs included frequency "teeth" spanning parts of the visible and near-infrared spectrum. Because the colors were evenly spaced, like the marks on a ruler, scientists recognized the potential of laser frequency combs for precision measurement and as tools for better understanding our world.

Today, laser frequency combs span millions of frequencies of light from the mid-infrared through the visible to the extreme ultraviolet, with the range continually expanding. They measure the frequency of light emitted by lasers, stars, nebulae, molecules and atoms. And, once they are extended into the spectrum's x-ray region, scientists will even be able to peer inside atomic nuclei.

The Ye group's atomic clock uses strontium atoms held in a crystal of light to generate "ticks" for timekeeping. The atoms are stimulated with an ultrastable laser of 700-nanometer red light. This laser is connected to a laser frequency comb. Only one of the millions of comb lines connects to the clock's laser, but once the comb finds the right color, it supplies information about all the other colors, too.

"The stability of our clock laser is so good that our clock doesn't lose a second for the entire age of the universe," Ye said. "The light is so coherent that you can go from Earth to the moon and back and forth 10 times, and you'll still know which particular [peak or trough of the light wave] you're sitting on, ifthere are no atmospheric disturbances. Furthermore, the clock laser transfers its stability to the rest of the entire visible spectrum via our laser comb."

Because of the astonishing precision of the grand-scale frequency comb, the new atomic clock is more than just a clock. In the future it may be used to map the Earth's gravitational field, perform tests of fundamental laws of physics, including dark matter searches, and explore the quantum behavior of many atoms working collectively.

Recently, the group worked with medical researchers to develop a comb-based noninvasive breath analyzer to identify specific molecules found in human breath. The device identified trace amounts of hydrogen peroxide in the presence of a much larger amount of water. The detection of hydrogen peroxide provided advance warning for patients developing acute respiratory distress syndrome.

In a related experiment, a mid-infrared-laser frequency comb device was able to show that a new sterilizer, which effectively kills bacteria and spores, was producing ozone, hydrogen peroxide, nitrous oxide, and nitrogen dioxide.

The Ye group is currently using a mid-infrared frequency comb to investigate complex molecules such as volatile organic compounds found in human breath. However, those compounds consist of many atoms that have complicated, and sometimes undecipherable, spectroscopy signatures at room temperature, making fingerprinting impossible. However, the group has discovered that if volatile organic compounds are cooled to low temperatures, they will have distinct fingerprints. Their detection in breath will aid doctors in diagnosing lung cancer.

"What is real is what you measure," said Ye, "and because we can measure precisely with light, we are on an exciting scientific journey from the mid-IR through the visible and into the extreme ultraviolet. Perhaps we'll move into the soft x-ray in the near future. It will be amazing to see the dance of molecules and nuclear transitions all happening on a common ruler of light."

Related Websites
Height of light: Progress in lasers and other light sources: http://www.nsf.gov/light
On the road to ubiquity: NSF support for laser research: http://www.nsf.gov/discoveries/disc_summ.jsp?cntn_id=135463
Light technologies and missing professor mystery: A video by the National Science Foundation: https://www.youtube.com/watch?list=PL0ujJTaPsv3ehhaYWjxKE2uCdwikA8ac6&v=D3a2USvTpwQ