No fear of falling

Research investigates how infants learn to become wary of heights 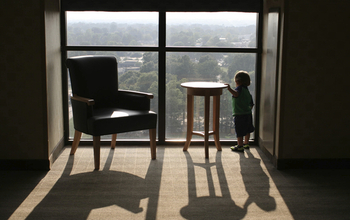 Researchers say infants may learn fear of heights based on visual experiences.

The following is part three in a series of articles titled "Amazing Discoveries About How Infants Learn," describing how infants acquire knowledge and what influences their social and thinking skills as they mature. Parts one and two are available on the NSF website.

Wide eyes, clammy palms, racing heart--fear. It's a common physiological reaction to heights in children and adults. Infants don't typically show it until they reach 7 to 9 months old.

Researchers say fear or wariness of heights is an important part of infant development because it helps prevent them from harming themselves. Before infants acquire that wariness, they will tumble over the edges of beds, fall from couches and, if not strapped in, wiggle free of highchairs. Even after falling, they are likely to do it again...and again.

So, how does the lifesaving fear of heights develop?

Prior research indicates that it results from psychological changes as infants mature. As infants grow, so do their mental and emotional abilities to protect themselves from danger, the research concluded.

But more recent experimentation by University of California, Berkeley, psychology professor Joseph Campos, San Francisco State University kinesiologist David Anderson and their colleagues derived another explanation. Campos, Anderson and an international group of psychologists found that infants develop fear of heights based on visual experiences that result from moving around their environment.

What is visual proprioception?

Visual proprioception is the optically based perception of self-movement. It involves optic flow data--information about the apparent motion of objects and surfaces seen in the periphery--entering the brain and activating regions linked with the inner ear and various muscles responsible for balance.

Before learning to crawl, infants show very little responsiveness to visual proprioception during moments when they're in motion, such as when their parents carry them across a room. Conversely, when they begin crawling, visual proprioception from their forward movement sharply increases, teaching them that what they see in their peripheral vision is vital to how they maintain balance.

And when infants encounter situations where they can't perceive optic flow data because the motion in the periphery is far away, such as when at a great height, this condition creates a sense of instability and causes a fear of heights to emerge.

In one experiment, the research team used a "moving room" to test the peripheral vision of 9-month-old crawling infants, 13 female and 14 male.

The infants individually were placed in a rectangular enclosure and the enclosure's side walls were moved toward the infants. Researchers scored the infants' peripheral vision based on their ability to perceive, process and show postural changes as they adjusted to the environment moving around them.

Later, the researchers placed this same group of infants on a "visual cliff" to see if the infants would cross it to get to their mothers.

A visual cliff essentially is a Plexiglass-topped platform divided into two sides. The infant is placed on one side, which has a pattern, such as a checkerboard, just below the clear surface, making it look solid. But on the other side, there's a gap under the Plexiglass--the pattern is more than a meter below the clear surface, giving the illusion that crossing over would be like falling off a cliff. The babies are placed on the solid-looking side, and their mothers beckon them to cross over to the side that looks like a drop (see an example of a visual cliff experiment in action).

As the researchers predicted, infants with higher scores in the moving room experiment were more likely to avoid the "deep" side of the cliff.

To further test their hypothesis, the researchers trained infants to use small, electric powered "go-carts." A dozen 7-month-old babies who had not begun to crawl used the carts to gain experience moving from one place to another, providing an opportunity to connect changes in optic flow to physical motion.

The team found infants who used the baby go-cart showed increased heart rates. When the researchers tried the visual cliff test with a separate group of babies who hadn't used the go-carts, they didn't show the same accelerated rates. The findings supported the researchers' hypothesis that connecting visual experiences with self-movement contributes to wariness of heights.

Campos said the experimental work showed a close relationship between balance and the fear of heights. Infants that showed high degrees of postural compensation in the moving room--trying to maintain their balance--showed more of a wariness of heights on the visual cliff than those with lesser degrees. Likewise, babies showed clear improvement in postural compensation after being trained on the go-carts, and then displayed more wariness of heights than those who hadn't gone through the same experience.

Other researchers who contributed to the study were David Witherington of the University of New Mexico, Mika Ueno of Doshisha University and Laure Poutrain-Lejeune of Caen University, Normandy, France.