Researchers from the Pentagon, Lockheed Martin and StandardsWork create platform for learning math and programming skills 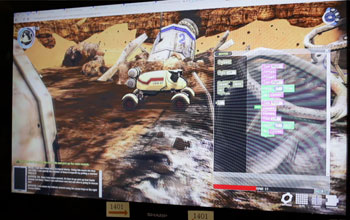 Today's students are accustomed to highly stimulating and interactive content, whether in the form of video games or mobile apps. As a result, they respond to a higher level of interactivity and engagement with educational content as well.

For those who would like to use interactive media for instruction and training, the technical barriers to producing educational content can be substantial. Learning the programming and artistic skills necessary to make use of game technology can be an insurmountable barrier for instructional designers, and producing such content can be expensive and time consuming.

For all of these reasons, the Pentagon's Office of Force Readiness and Training recently teamed with Lockheed Martin and the National Science Foundation (NSF) to create a new platform for distributed, immersive training applications, called the Virtual World Framework.

The platform makes it easier, faster, and less expensive to develop training games and simulations that can reach users around the world. Software written for this platform can be accessed by multiple players at once in an ordinary web browser environment. And because the software can be deployed to central servers, authors can quickly update the content for all users while preserving the player experience.

At the Beyond Today's Internet Summit in March 2015, the team that developed the Virtual World Framework demonstrated the prototype game designed to run on the platform: The Mars Game.

The game's story line revolves around a rover sent to Mars to prepare the planet for human explorers. Unfortunately, the rover has crashed. Players must gather parts from the environment, repair the rover, explore, and prepare the habitat for the arriving astronauts.

To navigate the damaged rover across the surface of the red planet, students work together to solve puzzles that are really computer programming and math lessons in disguise.

When the researchers from Lockheed Martin, StandardsWork and the Pentagon began to imagine how the game would be distributed, they initially considered using commercial hosting services. But that changed when Mark Torpey, principal investigator at Lockheed Martin, learned about the Global Environment for Network Innovations (GENI)--an ultra-high-speed, experimental networking testbed, supported by NSF.

"When I found out what GENI was, and where it existed and the fact that it's already all over the country and it's a large pool of resources, it was exactly what my project needed," Torpey said. "It's almost like it was made for my project."

GENI is an ideal network environment for shared and collaborative applications, like multi-player games, that require that the time between a click and an action--the network latency--be short.

Unlike the networks that we use every day to route information over the web, GENI is a programmable network, meaning many aspects of its operation can be tuned by the user to the needs of the data and application.

Also unique about GENI is the fact that instead of data bouncing between unknown Internet service providers en route to a destination, individuals own an end-to-end "slice" of the GENI network, passing the data without interruption. GENI is, in essence, a gamer's dream.

In Phase One of the experiment, the researchers tested The Mars Game with students in Colorado. In a study of 140 ninth- and 10th-grade students, the study group exhibited statistically significant improvements in both learning outcomes and in engagement levels when compared to a control group that utilized a traditional electronic online learning supplement that covered the same content.

Among other notable findings, boys and girls learned equally; Hispanic boys were the most engaged and learned the most compared to the control group.

This year, the team will do further user studies with students in Orlando, Fla. There will also be a broader study inviting students across the country to play and provide feedback. The team will be adding more gameplay and more content in the game, and running three sets of studies in total to assess how successful the game is at engaging the students and teaching them the content.

"We are embedding learning into the game in a way that [students] don't even know they're learning," Torpey said. "They're playing a game, they're learning math, programming and problem-solving skills and they want to keep playing."