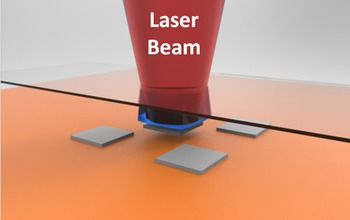 A laser detaches delicate nanostructures from a stamp in a new way to create nanocircuits.

Small objects tend to cling to everything. It's why parents dread hosting parties that involve confetti. It's why glitter is fun for crafts--until it finds its way onto everything else you touch.

When those small objects get stuck to you, a vacuum or lint roller can help remove them. But small, clingy objects are a serious problem in the growing field of nanomanufacturing. So what do engineers use when they have to build circuits that will fit on a piece of confetti? Researchers supported by the National Science Foundation (NSF) have a solution: lasers.

To understand this use of lasers, it's important to start with the question of why small objects can wind up sticking to everything they come in contact with.

When you place your hand around something as large as a soda can, you have to exert force through your grip to pick it up; if no force is applied, gravity moves the can towards the ground. In this example, the force of gravity on the mass of the can (weight) takes over when your grip releases.

But what happens when the object is much smaller than a soda can--say, a speck of glitter? In that case, moisture and static electricity become the dominant forces, and gravity's influence is minimal. These forces keep the speck on your hand, with or without your grip.

Tiny objects "are almost all surface area and no weight," says Placid Ferreira, head of the Mechanical Science and Engineering at the University of Illinois at Urbana-Champaign. "Adhesion is related to surface area; sticking is easy at small scales, letting go is difficult."

This presents an obstacle in nanomanufacturing, where the production of extremely small structures and devices involves work on objects the size of DNA, as well as cell proteins measured in nanometers.

With support from NSF, Ferreira collaborated with John A. Rogers and Yonggang Huang to find potential ways of using lasers to break the adhesion of tiny particles. The group focused on transfer printing, a type of nanomanufacturing.

Much like a rubber stamp that forms ink into letters that are imprinted onto paper, transfer printing uses a preformed stamp pattern to which "ink" with specific electrical properties will stick. The actual ink can be any one of a variety of materials that act as a semiconductor, the most well-known being silicon.

The stamp forms the ink into a nanostructure, and a number of those are transferred onto a receiving surface with another set of electrical properties, creating a nanocircuit.

One of the methods used thus far to separate nanostructures from stamps rely on selecting "ink" material sturdy enough to withstand contact with the receiving surface. Another works the same way as a lint brush, using a sticky receiving surface that will "pick" the nanostructure off of the stamp through adhesion.

Ferreira's group uses lasers to break the adhesive forces at the stamp-ink interface. The lasers that they're using are not new; previously they had been used to weld objects together. Ferreira's innovation was to focus the energy of the laser in a way that breaks the nanostructure away from the stamp with a high degree of precision.

The laser-driven process allows for a non-contact approach, opening the process to new materials that previously did not transfer when stamped. Further development of the method, according to Ferreira, "will continue to minimize energy loss from laser to nanostructure, allowing use of more fragile materials and faster printing."

As nanocircuits become more functional, their potential for applications becomes broader. For example, smaller, wearable sensors could monitor the air around a person with asthma to help them avoid environmental hazards.

"Advanced manufacturing has already taken engineers to the scale where we build systems with components smaller than the hand can grasp, and there will continue to be a need to assemble parts at smaller and smaller scales," says Bruce Kramer, senior advisor for the NSF Division of Civil, Mechanical and Manufacturing Innovation.