Beyond looking both ways

SBE-funded researchers ask a fundamental safety question: What are kids thinking when crossing the street? 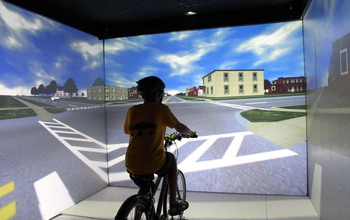 University of Iowa put kids on a virtual street to safely study factors that put them at risk.

A 10-year-old boy pedals his bicycle slowly to a busy intersection. In front of him, cars and SUVs whiz by, without pausing. He waits for a gap in traffic. When he sees one, he pushes off, gaining speed. But by the time he's halfway across, a car is almost of top of him. He makes it to the other side--but just barely.

This scene is usually reserved for the nightmares of parents across the country, but in this case, it occurred in a completely safe environment.

The bike is stationary. The street is actually a laboratory at the University of Iowa, surrounded by three huge screens. The "cars" are sophisticated virtual images that appear to be three-dimensional constructs, thanks to the polarized glasses the child is wearing. And the entire process is observed by researchers funded by the National Science Foundation's Social, Behavioral, and Economic Sciences directorate who are trying to understand the factors that put children at risk when crossing the street on a bike or on foot.

"We've been looking at children's basic road-crossing skills for some time now," said Jodie Plumert, a psychology professor at the university who specializes in developmental science, and the award's principal investigator.

Crossing the street is one of the first experiences in a child's life where the concept of taking steps to be safe--looking both ways, listening for danger--comes into play. The researchers in Iowa are looking to learn more about that decision-making process with ultimate goals that include giving parents information that could help them when they're discussing safety with young children. The risks children face on the road are real: 531,340 people were treated in emergency rooms in 2013 after being injured on a bicycle, according to the National Safety Council, an advocacy group aimed at reducing injuries that celebrates June as National Safety Month.

Most of the data the team has collected focus on children crossing the street on bicycles. Researchers record when kids believe it's safe to cross the street--the point at which they think they see a big enough gap in traffic--and how well that matches up to adults' responses. Children in the 10- to 12-year-old range often are actually close to college students and older adults in terms of the gaps they deem safe to cross, Plumert said. The problem is how well they are able to act on those judgements.

"Their timing of movement is not as good as adults," Plumert said. "They delay when they start crossing, and as a result they actually have less time to spare before the next car comes."

When adults anticipate a gap in traffic after an approaching car passes, they'll actually begin crossing while that car is still in front of them, anticipating that it will be out of the way by the time they reach the middle of the street. Children in the age range tested--the youngest of whom were 10--don't do that, Plumert said. They wait until that first car has gone by completely, giving them less time to cross before the next car nears.

That judgement about when to begin crossing is a key factor. The adults and kids tested took just about as long to get across the street. The difference between a close call with the next oncoming car and a safe passage with plenty of room to spare is all in the timing.

Another finding by the Iowa team: Children have more variation in terms of how they cut in behind the lead car in the gap. Adults tend to cross during fairly tight gaps in traffic and time their movement into the roadway very consistently. Waiting for large gaps might be worth encouraging, according to Plumert. If your timing is fairly variable, "you might want a wider berth between yourself and the lead car," she said.

The researchers are still studying why children's visual judgment about when traffic is safe to cross differs from their ability to time their crossing, but they think it may have to do with the cerebellum, an area of the brain that plays a big role in motor control and is still developing during puberty.

Adults are able to take visual information and fine-tune their physical responses to it in ways children might not be able to match. Scientists have long known that about infants. But Plumert noted that while her test subjects on the stationary bicycles were children, they were older kids--in the age range where the difference between their abilities and those of adults was unexpected.

"We were a little surprised at that," Plumert said. "You probably need to train that part of your brain up with more experience."

The researchers' simulator, known as the Hank Virtual Environments Lab, has allowed it to do the sort of experimental work that would be impossible in the field. Thanks to built-in motion-tracking technology, the team can render the correct viewpoint for a person in real-time. When the person speeds up or turns, the virtual world immediately follows suit.

Now, those researchers are using that technology to gather information on something even more fundamental than riding a bike: walking.

Doing so required reconfiguring the lab into something that even more closely resembles a street, with 14-foot-wide screens that allow test subjects to actually "cross" on foot, without using anything like a treadmill to approximate movement.

"You're actually physically walking in the simulator space," Plumert said.

The new simulator environment allows the researchers to work with younger subjects, and has already produced some interesting results.

All of the children tested in the 6- to 12-year age range timed their movements across the street poorly, when compared to adults. But while kids in the 6- to 8-year range tried to cross through some pretty risky gaps in traffic, the 12-year-olds were more conservative than either those younger subjects, or the adults. They waited for gaps so large that they crossed with as much time to spare as the adults, despite having poorer timing.

In other words, Plumert said "Their gap choices line up with their timing of movement."

Plumert said the lab's hardly done with its research--in fact, it's expanding the work, examining other factors that make children so vulnerable to unintentional injuries. The lab is looking at how kids cross two-lane streets, where the earlier experiments only incorporated one lane.

It's also examining parent-child communication about safety. Parenthood involves continuous safety training, Plumert said, and the lab studies how mothers try to steer 8- to 10-year-old children toward safer decision-making through conversation. The research focuses on finding out how parents can help children internalize safety skills, so those kids can keep themselves safe when they're not under close supervision.

And, building on its basic research, the lab is investigating an increasingly worrying phenomenon: distracted walking. With funding from the Department of Transportation, the lab is studying the safety effects of walking while texting.

"We're really excited about the data so far," she said.