It's blackberry season! Summer fruits depend on pollinators. But where have all the bees gone? 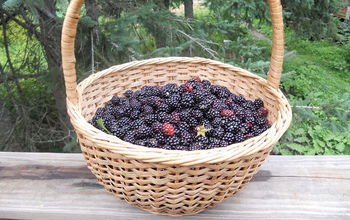 Pollinators are critical for blackberries and raspberries, and countless other fruits of summer.

Blackberries and blueberries. Cherries and peaches. Raspberries and apricots. These and many other summer fruits require pollination by bees.

But remove even one bumblebee species from an ecosystem and the effect is swift and clear: Pollination is less effective, and plants produce significantly fewer seeds.

That's just one conclusion of scientists studying pollinators and what's happening to these important species across the U.S. and around the world.

To find out more, the National Science Foundation (NSF) spoke with biologist Berry Brosi of Emory University in Atlanta, Ga. Brosi's research on pollinators is funded by NSF's Division of Environmental Biology.

1) What is pollination and why is it good for plants?

Pollination is a necessary step in the reproduction of many plants. Pollinators transfer pollen between flowers, which then allows those flowers to be fertilized. That in turn means they are able to produce fruits and seeds, from which the next generation of plants can grow.

2) Why should people care about pollinators?

Pollinators are critical for agriculture, pollinating most of the fruits, nuts and seeds in our diet. That represents about a third of the calories we eat. Pollinators are needed by about 90 percent of wild plants to produce seeds and continue their populations. We also need healthy populations of wild plants for the basic "ecosystem services" on which humanity depends: clean air and water and the cycling of nutrients.

3) Why are pollinators declining in North America?

Several factors are contributing, including habitat loss and degradation; agricultural chemicals, including pesticides; and diseases and parasites, which are spreading at higher rates due to the globalization of trade and human movement from place to place. Another possible factor is climate change, which is altering when flowers bloom and when pollinators emerge. Because they use different environmental cues to trigger these biological processes, flowers and bees are now increasingly "out of sync" with each other.

These declines are well-documented in the U.S. and Europe, and there are indications of pollinator declines in other parts of the world, even though we lack good baseline data in most places.

5) Are there examples of pollinator declines affecting people?

In parts of China, loss of pollinators is so severe that people are now hand-pollinating crops, including apples, an extremely labor-intensive practice that would not be economically viable in the U.S. Closer to home, almond orchardists are paying up to eight times more to rent honeybee colonies to pollinate their trees, relative to just 12 years ago.

6) What can we do about pollinator declines?

Three great steps to help pollinators are first to plant flowers--ideally native ones--that are attractive to pollinators and can help boost their populations. Second, use pesticides and other agricultural chemicals carefully and sparingly, which requires careful reading of labels of products marketed, for example, as "flower care." Third, "vote with your fork" by purchasing food that is grown using responsible agricultural practices.

7) Everyone is familiar with bees and butterflies. Are there other common types of pollinators?

There are many kinds of pollinators--easily more than 100,000 species. In addition to the 20,000 named species of bees and a similar number of butterfly species, this also includes other insects such as flies, moths, beetles, wasps and ants, as well as animals like birds (especially hummingbirds) and bats.

8) What are some unexpected or unusual pollinators?

Some surprising animals that act as pollinators are mammals like marsupials (relatives of the opossum and the koala) in many tropical forests, and lemurs (primates that are closely related to monkeys) in Madagascar. Some plants are pollinated by snails.

9) Why are there so many species of bees and other pollinators? Does diversity matter?

10) What role do plants play in supporting populations of pollinators? Do they do more than provide nectar?

While nectar is a very important resource for many pollinators, pollen is also critical as it's the only protein source in the diet of most bees and some other pollinators, and is needed for development of young bees. In addition, some pollinators feed on plant resources outside of flowers, such as butterfly caterpillars that feed on the leaves of plants to fuel their development and eventual metamorphosis to adult butterflies, which can then go on to become pollinators.