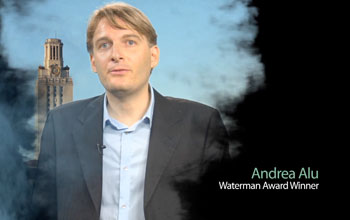 Andrea Alù, an engineering professor at the University of Texas (UT) at Austin, has an amazing job description: he makes things invisible.

The recipient of the National Science Foundation's (NSF) 2015 Alan T. Waterman Award, Alù leads a laboratory that has produced innovations including "cloaking" technologies that can bend electromagnetic waves around objects, effectively making them invisible to sensors.

Alù is a leading innovator in metamaterials, artificial materials with properties that allow electromagnetic waves to wrap around them. Normally, waves bounce off the surface of an object. If those waves are in the visible-light spectrum, that interaction allows the human eye to see the object.

In 2012, Alù's group at UT-Austin--with NSF support--was able to show for the first time invisibility of a 3-D object using radio waves. When the team applied its metamaterial cloak to a cylinder, waves went through as if the object were not there, making it invisible to radar and other technologies that sense radio waves. The team's measurements showed total transparency.

The technology also applies to visible-light spectrum waves, although Alù notes that anyone hoping to get an invisibility cloak like Harry Potter's will have to keep waiting. Due to the nature of those light waves, metamaterial cloaks that work with them are tiny. Still, those cloaks already have the potential to produce near-field optical microscopes with "invisible" tips that drastically improve their performance.

Likewise, the radio-wave invisibility cloaks hold the promise of significant technological advancement. Alù says those cloaks can be applied to rooftop antennas, so they no longer interfere with one another and are therefore more efficient.

His group continues to work to find applications for its research in a number of different areas of industry. The Waterman award, which recognizes outstanding young researchers, will provide him with $1 million over five years to further his work.