Back to school with new cyberlearning tools 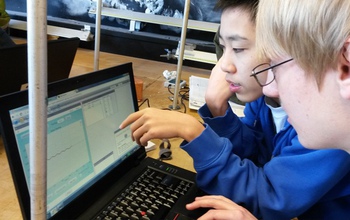 Students pair up to use InquirySpace for an independent investigation.

Back-to-school season is here and in addition to chalkboards, desks and inspirational posters, today's students may be entering classrooms equipped with sensors, tablet computers and advanced simulation software--at least, if they are using a new cyberlearning tool called InquirySpace.

Developed by researchers at the Concord Consortium and Northwestern University with support from the National Science Foundation (NSF), InquirySpace brings together a wide variety of educational technology innovations, enabling students to engage in extended scientific inquiry more fluidly than is currently possible.

"Science experiments are essential, but meaningful scientific inquiry can be very difficult to enact in the classroom," said Chad Dorsey, president and CEO of the Concord Consortium. "Far too often, science labs end up becoming dry exercises in which students follow step-by-step instructions to arrive at an already-known result."

InquirySpace aims to address this problem by developing tools that allow students to engage in the manipulation, analysis and understanding of experimental data at the heart of learning and doing science.

Through the project, students can gather data from a classroom experiment using a probe or sensor and examine their results with computer models of related phenomena. They can then bring the information they've gathered into a unique data exploration environment where they can quickly make sense of it and adjust their findings for further experimentation.

By embedding simulations and sensor data collectors in the classroom, researchers Chad Dorsey of the Concord Consortium and Uri Wilensky of Northwestern say they are able to aid students in gathering, visualizing and analyzing data from multiple sources.

"When students can move fluidly from experiment to data analysis and back again, they are better able to use representations to make sense of their data," Dorsey said. "Students move beyond viewing graphs as a task and begin viewing them as a tool to aid understanding."

A synthesis of proven tools

A core element of InquirySpace is the Concord Consortium's Common Online Data Analysis Platform (CODAP). CODAP lets students plan extended investigations of models and simulations. They can perform sophisticated analyses of that modeling, easily identifying places where they need to collect additional data or where errors have occurred, and then develop arguments based on the evidence they have gathered.

Another core element of InquirySpace is an agent-based modeling environment called NetLogo that lets students simulate the simultaneous actions of large numbers of independent elements. Systems such as these can develop complex, "emergent" behaviors where the end result is not easily predicted from the actions of one part. The workings of the immune system, molecular interactions in materials, economic activity and climate change can all be modeled and understood through the lens of emergent behavior.

NetLogo was developed by Wilensky, who has been working on agent-based modeling environments for more than 25 years. Wilensky directs the Center for Connected Learning and Computer-Based Modeling, which has built numerous educational technologies for science, technology, engineering and math learning. Wilensky's research has demonstrated that students' understanding of science increases when computational modeling is used. It's an important scientific tool that is only beginning to make its way into schools.

"Modeling has become a central part of science," Wilensky said. Currently, however, "Our science classrooms don't look at it that way."

Within NetLogo is a large library of sample models where simulation and modeling helps to reveal the underlying dynamics of the system being studied. For instance, in a forest fire demonstration, students model how fires spread under various conditions, allowing students to discover the tipping point at which a small fire becomes much more damaging.

NetLogo is easy for students of all ages to engage with, and has been used in thousands of schools across the U.S. and abroad. It stands as a model for how cyberlearning systems can be effectively designed, researched and implemented on a large scale.

"The skills and literacy necessary to do modeling are an increasingly important part of science, and outside of science," Wilensky said. "We want to foster this literacy and make it part of the classroom."

Data from experiments done with Molecular Workbench, NetLogo and many other simulation environments can easily be brought into CODAP and explored. This combination of technologies creates a flexible environment that students can use for a wide range of their own investigations. It provides a sophisticated but intuitive way for students to conduct scientific experiments with multiple variables and examine their results.

Project research demonstrates that students can learn to use these computer-based tools to undertake open-ended investigations that reflect approaches and thinking used by scientists. Results showed that students using InquirySpace demonstrated significant improvement in their ability to engage quickly in higher order reasoning, identify patterns represented in data, think about anomalous data and formulate their own questions.

"NSF's cyberlearning research investments help us better understand how to build the technologies that allow kids to learn real science by doing real science," said Chris Hoadley, a program director at NSF. "We hope that tools like InquirySpace become the first of many examples of how learning and building knowledge can be seamless and accessible to all."

The researchers piloted InquirySpace in high-school classrooms in Massachusetts and in Northwestern classes in recent years. In 2015, Concord Consortium staff have been disseminating InquirySpace to targeted groups and, as part of the InquirySpace project, Northwestern staff have just recently released NetLogo Web, a full reimplementation of NetLogo that runs in browsers.

NetLogo Web, together with the classic Desktop edition of NetLogo, can create agent-based models of virtually any complex phenomenon and run it on virtually all computational platforms. These models generate data that can be analyzed through CODAP, which in turn suggests new alternatives for experiments.

All of the components of InquirySpace are open source, web-based and widely shareable, enabling educators to customize the activities for their own classroom use and developers to incorporate the technologies into their own projects or create new variations on the tools from the project.

"This work is important and groundbreaking, but it's only the beginning," Dorsey explained. "Bringing together existing technologies from the Concord Consortium and Northwestern in this project has opened important new possibilities for inquiry-based learning. In the coming years, we expect to see many other exciting demonstrations of how integrations across powerful educational technologies can expand what is possible for teaching and learning."