New electricity meters are smart -- but are they trusted? 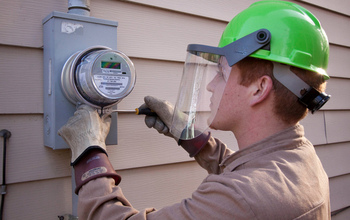 New electricity meters offer new benefits--but only if customers actually use their features.

The smart grid: It's the power-system modernization effort that U.S. utilities are building to meet the country's growing demands for electricity. But it's not confined to power plants and substations--if you have a smart meter, a key piece of smart grid technology already attached to your house.

That means that Americans' willingness to accept those meters, and use the features they provide, serves an important role in developing a more reliable, secure electrical grid.

Thus far, little data exist on how Americans feel about swapping out the old, fish-globe style meters for digital models that can automatically communicate with power companies, providing them with usage and billing data. With support from the National Science Foundation's Social, Behavioral and Economic Sciences Directorate, Syracuse University information studies professors Jason Dedrick and Jeffrey Stanton are looking to help fill that knowledge gap.

"There's a whole range of benefits to the smart grid," Dedrick said. "You're more resilient. You have fewer outages. If something like a hurricane comes, you do better in it and recover faster. But there are challenges--notably privacy and security, and those go hand-in-hand."

Dedrick and Stanton will be talking to focus groups in areas around the country that are using smart meters and meeting with utility companies to gather data on the changing relationship between power users and power providers. They'll be looking at how trust dynamics--for example, how much data customers are comfortable providing to companies--could play into smart meters reaching their potential as a significant technological advance.

"The relationship with the power company so far is that it's someone who sends you a bill once a month, and you call them when the lights go out," he said. "There isn't much of a relationship otherwise. That could be changing."

Smart meters aren't far-flung future technology; by the end of 2013, more than 50 million of them had been installed in the U.S., covering over 35 percent of customers.

Unlike the first deployed automated meters, which merely allowed companies to read them remotely, more recent units promise new customer benefits. Two years ago, the number of these "two-way" smart meters surpassed the ones that only offer automated reading.

The new meters can crunch usage data into billing reports, telling users, sometimes at an hourly level, when they're spending the most on power and how to cut back on costs. They can alert homeowners when their usage spikes. They can even integrate with customers' preferred smartphone budgeting apps. If customers shape their habits around those data--say, cutting down usage at peak times--the result could be less stress on power grids, lower consumption of fossil fuels at plants and lower electric bills for customers.

But, as so often happens with new technology, the issues facing smart meters have as much to do with user behaviors as the machines themselves.

Part of the challenge, as Dedrick describes it, has to do with awareness. "In a lot of the cases, people might even be unaware that they have smart meters," he said. When they do, they often aren't taking advantage of the technology. Something as simple as having to type in a password to access smart meter information on a website can drastically cut down the number of people who access those data, he said.

A matter of trust

Even if customers become aware of what their smart meters can do, there's still the issue of whether they trust the machines that are gathering data on their households--and the companies that collect that information.

Your power usage can say a lot about you. It could indicate whether you're at home or on vacation, what time you're awake or asleep or when you run certain appliances. But who's accessing those data? Are the data anonymized? How is the information being secured? Could it be sold? Could it be provided to law enforcement? Creating new sources of data brings up new privacy and security questions, and these are new territory for the power sector.

The current theoretical model of privacy and technology, according to Dedrick, posits that customers' willingness to share private information is rooted in the nature of their relationship with the party collecting the data. A social media company might collect more data from users than a utility company. But, if users have an acceptable level of trust in the social media company and see their disclosures as voluntary, they might be agreeable to that. Furthermore, their level of willingness to share can vary due to factors such as income and educational levels.

"What we're finding talking to people is that privacy is a very complicated issue," Dedrick said. "We're looking at the level of concern, and of trust, toward certain types of industries with certain information."

For utilities that traditionally haven't seen the kind of high-volume customer interaction as something like a social media company, this is complex new terrain and promises to expand even more in the future. As the smart grid expands, customers are turning to their power utilities to connect solar panels and electric car charging stations. Utilities are starting to reach out to customers with incentives to cut down usage at peak consumption times.

"There's a lot more interaction involved," Dedrick said. "From the utility's point of view, they're developing a whole new outlook."

And a vital part of that new outlook will be understanding not only the technology, but equally important, what customers really think--and how they behave.