New insights into the seasonality of Amazon's evergreen forests 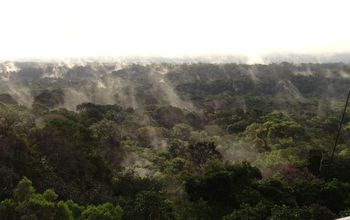 Sometimes you can't see the forest for the trees. In the Amazon, the opposite is true: without truly seeing the trees, you can't "see" the forest and understand the seasonal patterns of photosynthesis that play a major role in ecosystem and climate models, according to new research funded by the National Science Foundation (NSF).

"We can't understand the forest unless we understand the individual details," said Scott Saleska, associate professor of ecology and evolutionary biology at the University of Arizona. Saleska is part of the research team that uncovered the Amazon forest seasonality. The research was published today in the journal Science.

The work was supported, in part, by NSF's Partnerships in International Research and Education (PIRE) program, which helps catalyze strong international engagement by the U.S. science and engineering community. Projects generate new knowledge and discoveries; promote a diverse, globally engaged U.S. workforce; and build the institutional capacity of U.S. institutions to engage in productive international collaborations.

Saleska was the lead principal investigator on the Amazon PIRE, which focused on how Amazon forests respond to changes in climate, such as fluxes of water, carbon dioxide and energy.

Saleska discussed the work he and his collaborators -- including a group of students and postdocs funded through the PIRE -- did in the Amazon, and why it matters. Learn more about the discovery here.

What questions were you trying to answer with this research?

Fundamentally, it was an ecological question on the seasonality of tropical evergreen forests. We think of them as evergreen and they are -- they photosynthesize all year long -- but that doesn't mean they don't have some seasonality, even if it isn't as dramatic as temperate forests. But it's a little less obvious what that seasonality should be. Some seasonality is from climate; there's a dry season and wet season -- in the dry seasons there's more sunlight, in the wet season there's more water. We wanted to know whether there was additional seasonality in the biology of the trees, or leaves themselves, that explained the behavior of the forest. That's the big picture question.

But the research also solved a seeming discrepancy between ground and space observations.

Ground-based observations show pretty dramatic, strong seasonal patterns in forest photosynthesis. But from space there's observations from satellites which show much more subtle seasonality. So one question is: Why the difference -- and can we explain it? What we've been able to do, by using cameras, is look at the intermediate scale. The cameras looked at individual tree crowns, underneath the scale that the satellites are able to see. We found a pattern that is both consistent with the satellite data, and a change in leaf age that explains the seasonality in the flux. Both are right.

What did you find?

If you look closely, there's a very dynamic pattern of leaf growth, coordinated with leaf death. Fully one-third of the trees have this deciduous behavior, where trees lose a large chunk of their leaves all at once. Normally, when we say deciduous we think of a New England autumn, where leaves turn orange and red and brown, and then fall off the trees, and then six months later, they grow back again. Here, they're doing all this in the space of a month. So a lot of trees lose leaves and grow them at the same time, and this happens much more prevalently in the dry season -- when photosynthesis is also increasing. But this is seasonal, and photosynthesis drops back down in the rainy season.

Where were the cameras? How did they work?

We used cameras on three different towers in the Amazon, across the whole central transect of the Amazon's precipitation gradient. Two of those are just regular cameras that take pictures in the red, green and blue spectrum. They're like a good-quality camera you would use to take pictures. For one, instead of a blue band it has near-infrared, which is particularly sensitive to amounts of leaves. These cameras were mounted on towers, and they'd take pictures every five to 10 minutes.

Why is this research important?

If we want to understand the future of these forests under climate change, we have to have a good understanding of how they respond to variations in climate and weather. What we're basically seeing here is that every year there's this seasonal change in climate -- from dry to wet and back again, high sunlight to low sunlight, more rain to less rain. If we're not able to understand the mechanism of how those trees respond to those changes in climate ever year, then we have some problems. It's sort of like a first-cut test of our models for predicting the response of trees to climate. Do they work? Do they work at the annual time scale? If they don't work at the annual time scale, why should they work at any other scale?

So it adds a new layer of sophistication into climate models. But what about our understanding of the forest itself, and how it interacts with the climate?

This might be an important biological adaptation that sustains the forest through dry periods. This relates to the question of how robust or sustainable the forest is in general. The specific thing we see -- the synchronization of leaf growth and death -- allows individual trees to grow more in the dry season, the time when they might otherwise be limited by drier conditions. But this individual behavior has whole-system consequences. Trees transpire more water when they grow more: they moisten the atmosphere, which is quite dry during the dry season. If all, or most, of the trees do this, they moisten the atmosphere a lot, which atmospheric scientists have found stimulates the return of the wet season sooner than it would otherwise come back. These two mechanisms -- the boost in capacity of individual trees, and the changing of the environment they're in -- both sustain the forest at an individual level and a whole-system level. So understanding that is very important for understanding how climate change in going to happen. And how trees and vegetation in general can actually affect the climate itself.