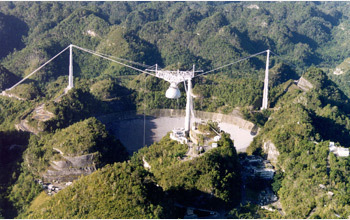 Overhead view of the Arecibo Observatory

On October 28, the National Science Foundation (NSF) announced in the Federal Register the Notice of Availability and Notice of Public Meetings for the Draft Environmental Impact Statement (DEIS) to evaluate the potential environmental effects of proposed operational changes due to funding constraints for the Arecibo Observatory in Puerto Rico.

The announcement also provided information regarding the commencement of a 45-day public comment period during which the public is invited to provide input into the DEIS.

Comments may be submitted during two public meetings (one in Arecibo, Puerto Rico and the other in San Juan, Puerto Rico) to be held on November 16 and 17. The public comment period remains open through December 12. Additionally, comments can be submitted via Email or regular mail. Further information regarding this process and ways to provide public comments to NSF are described below.

What is the proposed action?

The National Environmental Policy Act of 1969 (NEPA) requires federal agencies to consider the potential environmental consequences of proposed actions on the environment prior to making final decisions. The NEPA review process is intended to provide the public with an opportunity to comment and provide input on those decisions. On May 23, NSF announced the beginning of the scoping process and solicitation of public comments to identify issues to be analyzed in an EIS.

The purpose of the public scoping process was to determine relevant issues that influenced the scope of the environmental analysis, including identification of viable alternatives. On October 28, NSF announced the beginning of a 45-day public comment period to solicit comments from the public on the Draft EIS. It is anticipated that, in Spring 2017, the Final EIS will be ready for review. No decision will be made until at least 30 days following the issuance of the Final EIS.

NSF has initiated consultation under Section 106 of the National Historic Preservation Act (NHPA) to evaluate potential effects on the Arecibo Observatory, which is an historic property listed in the National Register of Historic Places. Section 106 of the NHPA requires federal agencies to consult with interested parties and the State Historic Preservation Officer regarding potential effects of their proposed actions on significant historic properties, such as Arecibo Observatory.

How to Submit Comments

Scoping comments will be accepted through December 12 and may be submitted during the public meetings or by the following methods:

Additional information will be posted throughout the EIS process at www.nsf.gov/AST.