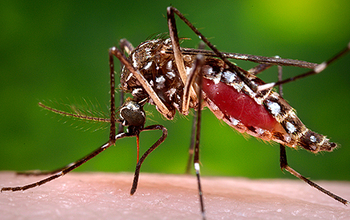 Mathematicians have created a virtual world to study a new approach to combating Zika.

The images are heartbreaking: thousands of infants born with small, misshapen heads, the result of a rare neurological disorder, called microcephaly, which can cause a myriad of intellectual and developmental disabilities. The culprit? Zika, a mosquito-borne virus that has swept through many parts of South America and more recently surfaced in Florida.

Newborns are not Zika's only victims, though.

Adult men and women who contract Zika may also be at risk of developing debilitating -- even life-threatening -- disorders. Zika is challenging modern medicine and raising important concerns about the spread of the virus, including at this year's Summer Olympics.

This is not the first time the Zika-bearing mosquito (A. aegypti) has threatened the public health. As a transmitter -- or vector -- of a number of viruses, the mosquito species has led to outbreaks of dengue fever, chikungunya and yellow fever. At the turn of the 20th century, a Nobel Prize-winning British doctor, Sir Ronald Ross, began using equations to determine the transmission dynamics of malaria. Since then, researchers, including those funded by the National Science Foundation (NSF), have used mathematical models to track and combat vector-borne diseases.

One such researcher is Mac Hyman, a mathematician who has conducted more than 15 years of research related to vector-borne diseases. Hyman is currently working with other scientists to develop a model that would track how to fight A. aegypti with bacteria, at least until researchers develop a Zika vaccine.

"We are modeling a new control mechanism based on infecting mosquitoes with the bacteria Wolbachia," said Hyman, an NSF-funded researcher at Tulane University who also received funding from the National Institutes of Health (NIH). "The idea is to create a Wolbachia epidemic in A. aegypti mosquitoes so they are less capable of transmitting the virus. Wolbachia already occurs naturally in 25-75 percent of the insect population, but not in A. aegypti. Infecting the mosquitoes with this bacteria can reduce their ability to lay viable eggs and shorten their lifespan by a day or two."

That might not sound like much, but mosquitoes only live for about two weeks. Because it takes a week for a disease-carrying mosquito to become infectious, most Zika-bearing mosquitoes are infectious for only the last few days of their lives. Shortening their lifespan, even by a few days, can have a big impact on their ability to spread Zika.

Mathematicians working to mitigate epidemics such as Zika often team up with epidemiologists, public health experts, entomologists and other researchers to develop appropriate models that simulate how best to address a public health crisis. Hyman's models aim to show the consequences, both intended and unintended, of releasing bacteria-infused mosquitoes into a Zika-afflicted region.

"When we first did this, our analysis predicted we would need at least 40 percent of the wild mosquitoes to be infected before we could establish a 'threshold condition' where the bacteria could take hold in the wider population," he said.

That's when Hyman turned to the virtual world.

Mosquitoes in a virtual world

Hyman and his postdoc, Ling Xue, created a virtual world on a computer where he first reduced the wild population by spraying and killing most of the wild mosquitoes. He then released the mosquitoes infected with the Wolbachia bacteria to see if they would establish an endemic population. It didn't work. The newly hatched mosquitoes were not infected, and the infection died out as soon as the bacteria-infected population dropped below the 40 percent threshold needed to sustain it.

Hyman determined that to sustain his bacteria-infected mosquito population, they would need to kill the eggs and larvae, as well as the adults, of the wild Zika-bearing population before releasing their mosquitoes.

"In hindsight, this solution is obvious, but we hadn't realized how important it was to consider the full lifecycle of the mosquito when we simulated our first virtual world experiment," Hyman said. "This is one of the advantages of running experiments on the computer. We can find out what works, and what does not work, in the model to help guide the mitigation efforts in the field."

Hyman has been quick to acknowledge that this is not a permanent solution. Instead, it buys time by reducing the ability of the A. aegypti mosquitoes to spread Zika, as well as other diseases such as chikungunya and dengue fever, until a vaccine can be developed. (He also noted that no Wolbachia-carrying mosquitoes have yet been released into the wild in an effort to oust the Zika-carrying mosquitoes.)

The best mitigation efforts we have right now are based on controlling the mosquitoes (insecticides) and reducing the probability that people will get bitten by mosquitoes (repellents)," Hyman said. "The vaccines being tested for these diseases will be available in a few years. Until then, this approach has the potential of slowing the ability of mosquitoes to transmit infection."

Even as scientists scramble to quickly address unexpected crises such as the Zika outbreak, they draw from a rich, longstanding reservoir of basic research -- in anatomy, in biology, in epidemiology, in mathematical modeling -- to find solutions. The ability to draw from this reservoir, which takes decades and sometimes centuries to fill, enables them to respond more quickly and with more confidence to the challenges of our time.

That is one reason why NSF continues to support basic research across a broad spectrum of scientific fields, something Hyman acknowledged is necessary for success: "NSF has funded the development and analysis of mathematical epidemic models for years, before there was a Zika, Ebola or chikungunya epidemic. This research has created an underlying foundation for mathematical models needed to respond to new emerging diseases he said. If we wait to fire up our mathematical engines when a threat, such as Zika, first appears, then we would need to wait years before we would have a reliable model for understanding where this virus was going. But because NSF had been funding this type of basic research for so many decades, the community was ready to respond quickly."

Mary Ann Horn, NSF program director in the Division of Mathematical Sciences, agreed and said that collaboration is critical.

"By using mathematical modeling and analysis, we can learn about transmission and control of disease that may not be immediately clear through data collection involving those infected," Horn said. "Collaborations between mathematicians and biologists allow our understanding to be advanced more quickly. This project was funded jointly with the National Institute of General Medical Sciences and is likely to not only impact the understanding of the Zika virus but other diseases as well."