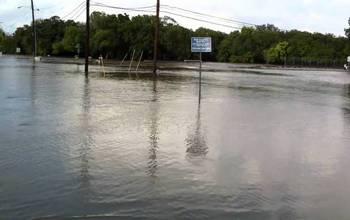 The recent floods in Louisiana have reminded the nation of the devastation these disasters can cause, resulting in more than a dozen deaths and damaging more than 40,000 homes. David Maidment, a civil engineering researcher at The University of Texas at Austin, is acutely aware of the power and swiftness of floods -- one that struck Nov. 1, 2013 still haunts him.

The storm started Halloween night. By the following morning, the wall of water that coursed through the city of Austin had swept away five residents, including a mother and her eight-month-old son.

The National Weather Service had issued a flash flood emergency warning for the area -- the first one ever for Austin residents -- but few expected the volume of water that came crashing down. The Blanco River, with only one forecast point downriver from where the major surge occurred, rose 11 feet in 15 minutes and peaked at 41 feet.

"People got killed without any capacity to respond," said Maidment, a 2016 inductee into the National Academy of Engineering who works to mitigate flood risks around the country.

Not only does flooding cause extensive damage to hundreds of thousands of homes and businesses annually, but last year it killed more people than any other weather hazard, including tornadoes and hurricanes, with Texas experiencing the most flood-related deaths.

With support from NSF, Maidment and his team created a water model prototype for the science community for research purposes. That prototype helped establish the National Water Model, which launched on August 16 and now delivers forecast information, data, decision-support services and guidance to essential emergency services staff and water management personnel.

The National Water Model is operated by the Office of Water Prediction, a geographically distributed organization with locations in Maryland, Minnesota and Alabama. Established by the National Oceanic and Atmospheric Administration (NOAA) under its National Weather Service component, the Office of Water Prediction coordinates, integrates and supports consistent water prediction activities, from the global to the local level.

"Through our partnership with the research, academic and federal water community, NOAA is bringing the state-of-the-science in water forecasting and prediction to bear operationally," said Thomas Graziano, NOAA's director of the Office of Water Prediction, who holds a doctorate in atmospheric science.

The National Center for Atmospheric Research (NCAR), an NSF-sponsored center, developed the underlying technology for the model. NOAA then used that technology to develop and implemented the prototype along with NCAR, NSF, the Consortium of Universities for the Advancement of Hydrologic Science, Inc. (CUAHSI), and Integrated Water Resources Science and Services partners.

Managing a deluge of data

The stream and river network of the continental United States consists of 2.7 million reaches. (A reach is a general term used to describe a length of stream or river surrounded by a local drainage area.) Until recently, agencies were only able to make flood forecasts on about 4,000 stream and river locations.

By combining geographic information system (GIS) data with real-time weather forecasts, and using sensor data from more than 8,000 U.S. Geological Survey gauges and other sources of information, the National Water Model can predict where dangerous flood situations will arise at all 2.7 million reaches in the United States.

To do so, however, requires powerful computers and software capable of stitching diverse pieces of information together and producing flow forecasts that can be quickly updated.

Collaborating with researchers at the NSF-supported CyberGIS Center for Advanced Digital and Spatial Studies at the University of Illinois at Urbana-Champaign, Maidment used the Stampede and Lonestar supercomputers at the Texas Advanced Computing Center (both funded by NSF) to manage the massive surge of data and to perform the necessary calculations to forecast events across regions and even nationwide.

During the NSF-funded National Flood Interoperability Experiment (NFIE), which the National Water Center and Consortium of Universities for the Advancement of Hydrologic Science conducted in June and July of 2015, Maidment demonstrated the feasibility of calculating the river flow for all 2.7 million stream reaches simultaneously.

Using the Stampede supercomputer in Texas, he was able to compute the streamflow for all output points in only 10 minutes.

"I have become a convert," Maidment said. "When I proposed this effort, I had a good intuition that it could be accomplished. But the fact that we achieved it and can model the whole country is astounding. It's lifted our expectations. We now have real-time hydrology for the whole nation."

Daniel Katz, a former program director at NSF who oversaw the award to develop the water simulation software, emphasized the importance of Maidmen's prototype outcome.

"This project is a great example of how integrated cyberinfrastructure -- hardware, software, data, networks and people -- can be used to solve some of the world's most challenging problems and to positively impact people's lives," he said.

Earlier this summer, researchers at the CyberGIS Center went further, generating the first 10-meter resolution Height Above Nearest Drainage (HAND) model for the lower 48 states through a collaboration with the NFIE project. The HAND model normalizes diverse terrain according to the relative heights found along its drainage network, and in this way, more accurately determines the local draining potentials, an important factor for flood predictions.

"The HAND model and computational workflow we developed provide unprecedented capabilities to conduct large-scale flood inundation mapping research," said Yan Liu, technical coordinator at the University of Illinois at Urbana-Champaign's CyberInfrastructure and Geospatial Information Laboratory. "It opens the door for GIS scientists and hydrologists to improve the national inundation mapping methodologies and achieve the goals of the National Flood Interoperability Experiment."

Through the process of developing these proof of concept simulations, Maidment and his team made substantial contributions to the collective understanding of high-resolution hydrologic modeling on the continental scale, according to Edward Clark, director of the Geointelligence division at NOAA.

"This work aided the National Water Center in exploring key aspects of the modeling framework that are being transitioned into our operational supercomputing environment as the first instance of the National Water Model," Clark said.

"In effect, water forecasting is becoming like weather forecasting with the National Water Model describing a continuum from the atmosphere to the oceans and from coast to coast through the stream and river network of the nation," Maidment said.

At the White House Water Summit in March 2016, NOAA announced that the National Water Model will continuously forecast water flow on all of 2.7 million U.S. stream reaches -- providing more than 700 times more detail than the previous model. With such a system now in place, Maidment and his collaborators hope they can reduce the damage of future flooding.

"We've lost a lot of people," Maidment said, "and honestly some of them didn't have to die."